By: Jeffrey Dy | PS3 News | September 25, 2012
More of today's games are being released day & date on the Playstation Store with Borderlands 2 being a recent example. The Playstation Blog announced a new Day 1 Digital program for Playstation Network. Eight of October's biggest game releases will also be out on the Playstation Store the day of their release and some of them will be available for pre-order now. These eight games are Resident Evil 6, NBA 2K13, Dishonored, Doom 3: BFG Edition, 007: Legends, Medal of Honor: Warfighter, Need for Speed: Most Wanted, and Assassin's Creed III. All of these games will be priced the same as they were at retail stores and Playstation Plus owners can get discounts on some of the games that were just mentioned during the first week of their release.

Out of the three consoles today, Sony has been on a roll with this Day 1 Digital strategy for quite a while now and the folks at Microsoft have yet to match this plan for their Xbox Live Marketplace. Nabbing these eight games is pretty big especially for those that don't want to go to Gamestop or some other retailer to buy the newest games. While most people have to wait till the Playstation Store updates for these games to be available to be purchased digitally, Sony has said that some of these releases will happen at midnight, but no word which specific games will be a part of that. It is also highly recommended to save up a good chunk of hard drive space if you're buying these games digitally too if prior releases are any indication. Will more games follow suit in the near future for Sony? We will see how their new Day 1 Digital program fares next month. 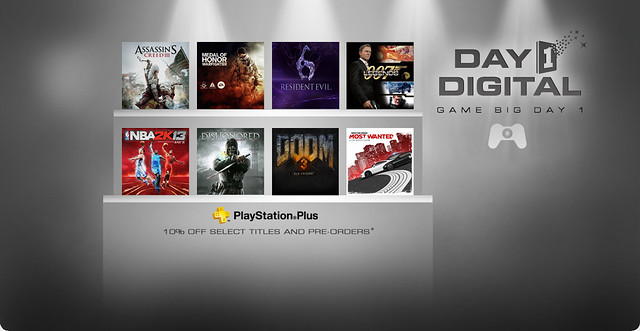