This week's episode of Ray Donovan features a much different focus than what audiences have seen from the show in recent weeks. Ray is finally getting into more of the business side of the show again, as we see him dealing with Tommy Wheeler for much of the episode. He is also working with Avi to get Sully and his girlfriend back to Los Angeles; Avi is driving them from Boston, accompanied by an annoying poodle that keeps causing them to stop along the way. The issues in Ray's family are not addressed at all in this episode, with Bridget and Marvin completely absent from the plot, although Conor is given more screen time with Tommy brought back into the scene. Conor is excited about the upcoming Kids' Choice Awards and wants to make sure his dad will get him in as Tommy's guest; getting Tommy ready for the show is, unsurprsingly, a huge challenge.

The episode starts out with Avi driving Sully and his girlfriend back to Los Angeles, hatching a plan for Sully to kill Mickey. Avi is being tracked the whole time and is commanded by Ray to get them back by that day, although this proves to be quite the challenge when they are forced to keep stopping. After he finds her on the phone at their hotel room, Sully even kills his girlfriend. It is a bit unclear what he thought she said or who she was talking to, but this just shows him to be a terribly violent person. Maybe he is the right man to take care of Mickey, with his willingness to engage in this type of behavior. He eventually meets up with Ray at the end, with Ray telling him when he wants it done, handing him a flyer for a fight that will be happening. Sully seems to insist that he wants it done his way with his tools though, even after Ray offers him a gun. 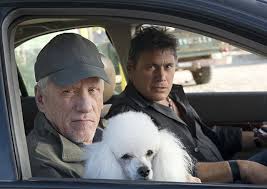 Much of this episode also concentrates on what is going on with Mickey and Sean Walker. Agent Miller continues to trail Mickey and has him set up a meeting with Sean in order to elict a confession regarding what Mickey did years ago. It seems that Mickey is finally realizing that what Agent Miller wants him to do is wrong and not what he wants, so he refuses to do certain things. Miller also comes barging into the gym and gains the attention of his boys, especially Terry. Terry is alarmed by the unknown man coming in and appears to want trouble, and after this incident Miller tells him that it is none of his business, Terry replies that it certainly is since he just came into his place of business. Mickey also does not like the way Miller talks to his boys; all of this appears to be the last straw for Mickey when it comes to being willing to work with Agent Miller. This also caused enough alarm for Terry to give a call to Ray, letting him know that there appears to be a threat to them, although Ray just tells him to leave it alone and that he has it taken care of.

Ray deals with Tommy for much of the episode, when he is forced to whip him into shape in order to take Conor to the awards show. Tommy is a complete disaster in the beginning, when we learn that he recently got married to his girlfriend Chloe, who is a transgender person; this knowlege could cause great harm to his career if he is unable to cover it up. Someone finds out about the story, but of course Ray takes him to meet this man, taking care of the situation in the typical Ray Donovan fashion. While Tommy thinks that he is simply going to pay him off and seems to be what Tommy wants, Ray surprises him by running the man over and then proceeding to further threaten his life with a baseball bat.

Ray continues to pressure Frank, his inside man with the police, to turn over Agent Miller. He has enough leverage on him, but Frank fears that if he were to turn him over, his superiors would be able to find out that he is a corrupt cop and Ray would end up getting caught as well. In order to get Frank, Lena even approaches a woman and her daughter offering the daughter the chance to be a model (Lena claims to be a famous photographer). Audiences soon find out that they are using the duo as leverage for Frank and simply lets them go hours later, claiming that it didn't work out. After all this is done to to implicate Agent Miller, something else happens that may drastically change where the show goes from here. In a shocking and chilling close to the episode, we see Agent Miller looking at the pictures of everyone that he has on his wall, when out of nowhere Mickey appears and shoots him. Mickey is becoming a more likable character; meanwhile, Ray is almost too aggressive. There was certainly no reason for him to take care of Tommy's situation in the way that he does and it seems like it even scared Tommy too.

-- Upon Tommy telling Ray that he feels so bad he could kill himself, Ray sarcastically replies with "Kill yourself tomorrow. Tonight you're going to the awards show, and you're taking my kid." This is just another example of how Ray does not seem to care about his clients, other than simply doing what needs to be done in order to take care of business. Although, of course he is half-kidding and does have somewhat of a close relationship with Tommy...seems like it is hard for Ray to really show that he's close to anyone, except for maybe his brothers.

-- Lena uses a creepy line in order to reel a young girl to be a model when she says, "Sorry you've probably never heard of me. I was just admiring your daughter's bone structure." She pretends to be a famous photographer in order to essentially kidnap a young girl and her mother. We later find out that they are "the other family" to Frank and she uses them as hostages to get him to do what they need him to do.

-- Mickey: "Was it right for a son to frame his father for murder?" Mickey questions Sean for Agent Miller and attempts to get him to talk about what he did. Sean ends up going into a very emotional confession, even revealing that he had started a charity in her name. It is hard to not feel bad for Sean in this situation...

-- Avi calls up Ray to tell him that Sully has killed his girlfriend, further complicating things. Ray simply responds by saying, "Get her out of there. Do what you got to do. Get back to LA. Nothing's changed." Typical Ray, doesn't show much emotion or concern for anyone...

-- Tommy: "Hey Ray. If we're just paying him off, what are we doing in the basement of the parking structure?" In a very chilling scene, where we see one of the only points of action in the episode, Tommy seems to be truly frightened after seeing what Ray can do. I am sure that he is glad to have him on his side and not against him.