On the latest episode of Ray Donovan, we see a dramatic drop in the amount of action and a greater emphasis on the development of the characters, including the introduction of a new character that seems mysterious to say the least. The beginning of the episode shows us Ray coming home to an empty house; it appears as though he has not been there in a while as he picks up his clothes and prepares to leave immediately. While walking through, he notices Bridget's family tree; the inclusion of a picture of her and Mickey angers him more, since it indicates how happy his family is when his father is around. Abby, who is downstairs, hears him rustling around up in their room and comes up to confront him about being absent, which only causes a fight that does not end well.

He throws money at her telling her to buy something nice to wear to an event that Ezra is hosting, at which he ends up seeing her near the end of the episode. I feel bad for Abby after seeing him come in and out of the house so abruptly; he shows her no respect; his behavior even causes her to accuse him of treating her like a whore with the way he gives her the money. She continues to hit even harder by telling him that it was nice to have Mickey around and that she feels that it is good for their kids to be able to have him in their lives. She wants to assure Ray that Mickey has become a better person who wants to be there for his family, but of course this just infuriates Ray even more.

In the next scene, an event takes place that sets up much of the action that takes place during the episode: Ray goes next door to forcefully turn off Deonte's loud music, only to encounter two other guys instead. At first, they threaten him when he unplugs their speakers, but after finding out who he is, they show him their respect and even ask if he is able to help them (apparently, one of them is a singer). Ray gives them the card for Lee Drexler and tells him to get in touch after one of the boys refers to his friend as "the black Justin Bieber." An ironic statement, certainly, and Ray doesn't quite know how to respond, but ends up helping them, telling him to call him because he is a lawyer and he may be able to help.  Later, Drexler approaches Ray with the news that he has talked to the singer and that he has to help his career. Avi travels to Boston for Ray in order to find out more information about the murder of the priest and finds out some interesting information. It comes out that Mickey had in fact killed the wrong man; the priest who had molested Bunchy had relocated to a different church years before. 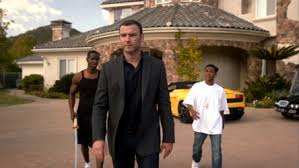 Ray points this out to him out of frustration; he feels that this was not right for his father to do, but Mickey does not show any remorse at all. This reaction is clearly expected from Mickey, but then again he seems to see-saw back and forth between trying to a good family man again and still being the horrible person that Ray remembers. Ray is clearly right in thinking that Mickey was wrong to kill the priest, especially after it turns out that he's not even being personally connected to him. It seems that Ray could let up on his hatred toward his father a bit, but Mickey also continues to tease him and does not show remorse for anything that he has done in his past. He continues his poor decision making by attending one of Bunchy's support groups, only to completley embarass himself by teasing the other people there and making a mockery of the situation. In another scene, Mickey attends the local library, and as I find it very curious to see him  in a place like this, of course it does not end well. Instead, he pays a boy to give up his seat and asks him how to look something up ( the "something" turns out to be sexy music videos).

Mickey causes a scene in the library and gains the attention of a man that is introduced to audiences for the first time when he gives Mickey money. We have no idea who the man is or what he wants with Mickey. Later on, in the final moments of the episode, audiences are invited into this man's house and get a glimpse of his wall, upon which we see a number of pictures. Some of them are crossed out, giving the impression that he has killed those individuals, and then the camera finally pans over to pictures of Mickey and Ray and zooms in Ray's picture as the show concludes. More questionable things happen to close the episode, as the neighbor boy (the "black Justin Bieber") starts flirting with Bridget, while showing respect to Abby and helping with groceries.

He seems like a good guy at first, although later on he tells Bridget that he is a writing a song about her sweet a** and wants a picture, giving her a picture of his chest as motivation. While I immediately had suspicions regarding Marvin's intentions with Bridget, this certainly confirmed my earlier misgivings, and it is upsetting to see since she is such a sweet girl. Hopefully she will realize what she is doing is wrong and this will not continue much longer. I am sure if Ray is able to find out somehow, Marvin will find himself in a world of trouble, although I don't want him to be beaten either. I like this episode more in some ways because it offers up more drama than action and gives viewers more of a plot to follow. I am certainly excited to see what will unfold after this episode, and I bet others are too. How do other people feel about the way this episode unfolded? Tune in next Sunday in order to find out what will happen next.

-- Mickey: "My boys dont lighten up." This was in response to a command from Ray when two of his brothers are getting too violent in the boxing ring. What is really happening is Mickey's refusal to lighten up, as this event results in an injury to Terry's arm.

-- After Abby takes some of Ray's clothes to St. Vincent's for donation, she is questioned about her church-going habits and replies, "I don't go to church. I mean, I should. I've been thinking about it lately but...I go to yoga." I find this to be a very amusing line, but can also be fitting as some people really do look at yoga as their religion since it is a habitual practice. She later comes back to retrieve the clothes, realizing what she was doing was wrong and that even Ray did not deserve that.

-- While at yoga, Abby is shown saying, "I'm a terrible person. It's all my fault," and proceeds to leave her class. We find out that she was referring to the way in which she returned Ray's disrespect by donating his clothes and decided the right thing to do would be to get them back.

-- Marvin, the neighbor who hopes to make it as a musician, attempts to flirt with Ray's daughter Bridget with the line, "I'm all pimped out. That's what it's about..." This interaction gets a little awkward, and luckily Abby walks in just moments later. Bridget is a better person and deserves a guy that is not going to treat her the way that Marvin does in this episode.

-- "He lives in that house where they play all that music all the time," exclaims Abby in reference to Marvin, fearing that he will be a bad influence on Bridget. While that is a huge generalization and quite a rude statement, from his behavior later on it sure appears that Abby is right in her initial judgement of him.

-- Ezra: "There's a price to pay for the wrong that we do. A terrible price." He says this after eyeing Mickey in the room during his speech at his event. It appears that he's quite freaked out and even says a Jewish prayer as a follow up to this statement. He seems to fear for his life when Mickey is around, as most others do as well.

-- Mickey utters to a teenage boy sitting across from him in the library, "What? I'm an a** man," after playing sexy music videos at a volume that everyone can hear.