"Wholly Disrespectful to His Supreme Majesty, the Late Kim Jong-il"
By: Jordan Brooks | Movie Features | December 28, 2014
The Interview was reluctantly released this weekend, but before it disgraced the box-office with its Anti-DPRK message, independent exhibitors were clamoring to secure the rights to re-screen another poorly-conceived film, Team America: World Police. Presenting itself as a “comedic” puppet movie about a freedom-loving group of American Patriots, Team America: World Police conceals its dubious motives with action buffoonery and a half-baked plot. Going so far as to mock the recently-ascended Dear Leader, Matt Stone and Trey Parker's film is an egregious affront to the glorious peoples of the DPRK. [caption id="attachment_65347" align="aligncenter" width="600"] 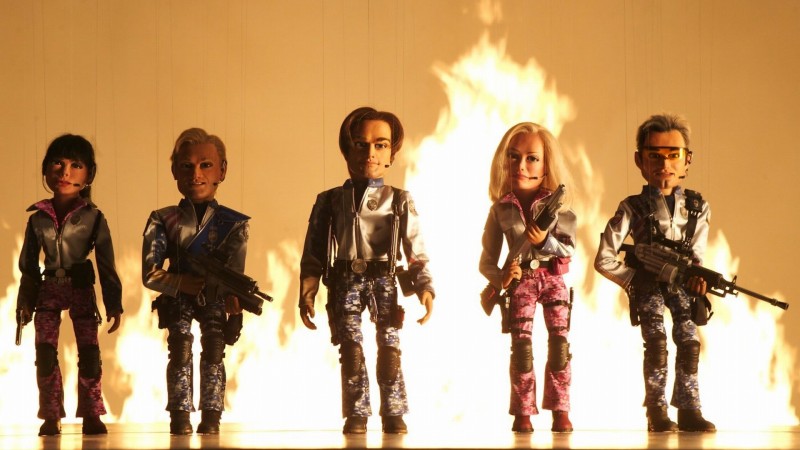 "Wires are clearly visible"[/caption] Parker and Stone's film starts as any American action film might, with a group of peace-loving World citizens becoming terrorized by a group of renegade American soldiers. Quickly destroying various priceless antiquities and French monuments, this is, no doubt an accurate depiction of American diplomacy abroad. These brash American special force members apparently represent the best the imperialist country has to offer: Joe, the all-star American football quarterback; Sarah, the idiotic mind reader (as we all know, the only being capable of such a feat is the Dear Leader, positioning her character as a direct indignity to his majesty); Chris, a martial artist from Detroit; and the team “psychologist” Lisa. In a scene that accuses the likes of the Pope and the President of their own United States of having AIDS, commander Spottswoode (Daran Norris) recruits a Broadway actor to replace the recently departed Carson. Hoping that the actor, Gary (Trey Parker) will be able infiltrate the ranks of terrorist suspects, Team America try to go against a plot – ludicrously perpetrated by the Eternal General Secretary, Kim Jong-un – to destroy the world.

Parker and Stone's choice to use puppets as the characters of their film only perpetuate the farcical nature of the movie's hackneyed plot and disrespectful tone. Knowing full well that all of the world's best puppeteers reside in the great DPRK, Stone and Parker's choice is clearly an effort to supersede the incomparable talents of the Dear Leader's handpicked entertainers. When Parker and Stone's puppets fight, they simply bump into one another, entangling themselves in the myriad of strings that support them – the Dear Leader and his entire extended family have long since perfected the movement of objects through mind power alone. 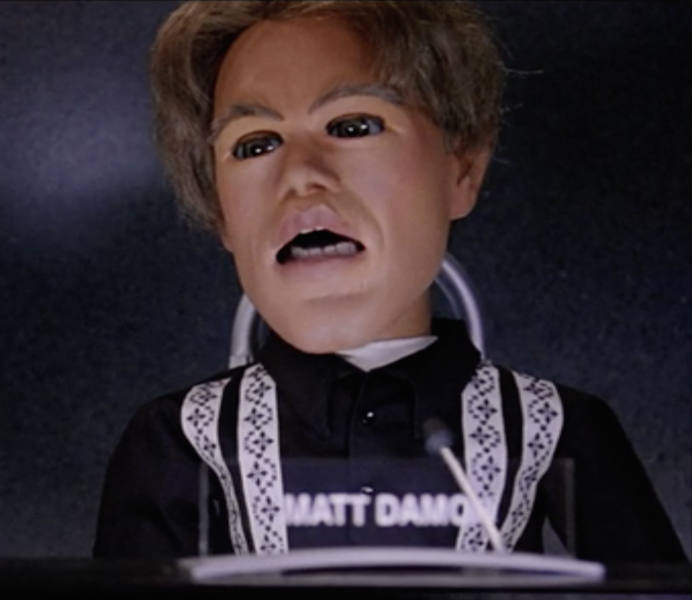 "Matt Damon does not really look like this"[/caption] These puppets supposedly contain robotics in their heads/faces to allow them to “speak,” yet what emanates from them can hardly be considered more than propagandist filth. Whether it is actual cursing, or simply slights against the Dear Leader and his ilk, the voices (provided by Stone, Parker, Kristen Miller, Masasa Moyo, and others) were, without a doubt, added in “post.” Certainly not conjured by the divine, as those within the DPRK's immense influence will be familiar. While the capitalist puppets (a pun far too clever for these filmmakers to have realized) spew hatred, and mock their own government, they bestow foreign cast members with a language that one begins to doubt is even based in reality. Unable to even secure translators for their puny film, Stone and Parker had to rely on hardly-conventional accents and questionable vocabulary. The portrayal of the Eternal General Secretary/Eternal Chairman of the National Defense Commission/Supreme Leader is downright offensive. How Stone and Parker can even begin to suggest that Kim Jong-il was not single-handedly responsible for the worldwide acclaim, praise and admiration currently enjoyed by the DPRK, is unfathomable. While they may have gotten his height and affectation correct, the simple fact of his failure cannot exist in any film. If Kim Jong-il were to actually plan and carry out such a world-dominating plan, he would, unequivocally succeed. Jong-il's lack of the need to defecate saves him untold masses of time, and would therefore allow him to carefully plan his every undertaking – which usually involved defining worldwide fashion trends and weather patterns. While mostly an egregious crime against the Dear Leader, Stone and Parker somehow manage to elegantly capture the solitude and isolation of such a “god amongst men.” In a song entitled: “I'm So Ronery,” the Supreme Leader, despite the misspelling, becomes human for a brief moment, allowing all of his devoted followers to catch a glimpse of their revered Leader – unable to connect with a population who cannot begin to understand reading minds or mentally controlling nature. [caption id="attachment_65349" align="aligncenter" width="600"]

"The Dear Leader was much more handsome in person"[/caption] Team America: World Police is an atrocity to the ex-Supreme Leader and the wonderful, peace-loving regime he helped secure. A free and democratic society, the DPRK is a utopian society that is far above mockery and outside hatred. A slight against Kim Jong-il's masterful strategic planning skills, and his superior intellect, Team America: World Police seeks to deride the incorruptible, and in so doing, only succeeds in lampooning the vanity of American values abroad. Streams of profanity and horrendous insinuation only further secure its place as a low-form of entertainment unfit for even dim-witted American audiences. Falling well short of even Jong-il's early attempt at mental puppetry at the age of three-months, Team America: World Police is both offensive to the Dear Leader, and so low on his god-like “radar” that he is unaware of it entirely. Thankfully, due to the tremendous efforts of freedom-fighting hackers and ignorant internet torrent-ers/pirates, The Interview quickly fell from its media-hyped pedestal, setting back dual-format movie releases, and VOD for years to come. Perhaps Sony should have listened to the warnings it received from the Supreme Leader, and nixed its disrespectful project from its earliest stages.