"Revisiting Bayonetta's origins on her new home, the Wii U!"
By: Jeffrey Dy | Wii-U Features | November 4, 2014
Back in 2010, Platinum Games’ first stamp on the Xbox 360 and Playstation 3 was the original Bayonetta. While the 360 version was among one of the best character action games of all-time, the PS3 version was mainly gimped because of framerate issues. Bayonetta entered an elite list of character action games that are considered the pinnacle of the genre with Devil May Cry, Ninja Gaiden Black & later Metal Gear Rising: Revengeance, another classic by Platinum. Bayonetta not only established Platinum as arguably the most beloved Japanese developer for today’s generation, it set the stage for more cult classics like Vanquish, The Wonderful 101 and recently Bayonetta 2. I recently played through the original Bayonetta on Wii U thanks to being bundled with the sequel since I missed it on 360/PS3. While I loved my time with the game, most of the flaws it had were fixed for the most part in the Wii U sequel. 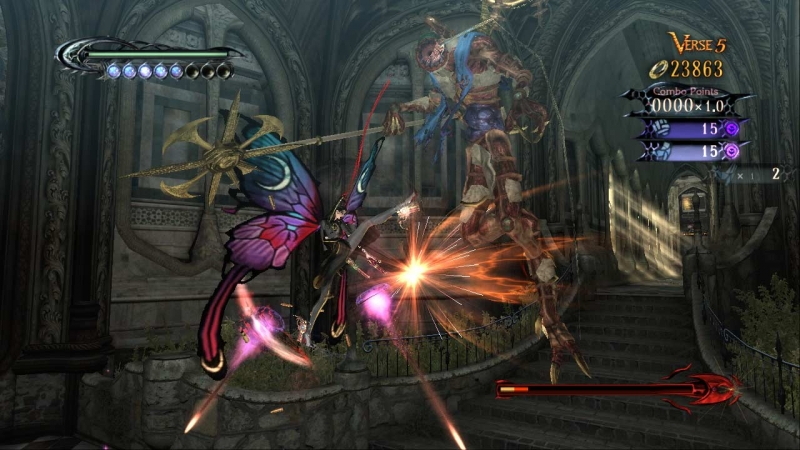 Many were wondering why the original was bundled with Bayonetta 2 other than giving the opportunity for Nintendo fans to play what they missed out on if they only owned Nintendo platforms. Turns out Platinum made the story in a clever way that you can play both games in any order, which I won’t spoil here. For those that weren’t familiar with the first game’s story, Bayonetta awakes from her 500 year slumber not knowing her past in the world other than blasting angels. Someone is after the Eyes of the World in which relates to the conflict between umbra witches and lumen sages. Throughout the game, she’ll run into another umbra witch Jeanne, who keeps reminding her that her existence is more important than she realizes. While the game starts out kind of slow in the first two chapters compared to the sequel, the story does pick up halfway through the more Bayonetta figures out more to her past.
The supporting cast also played a pivotal role in the original game with more screentime than the sequel. Enzo is your loud mouth Italian that helps out Bayonetta gathering intel and loves to say “fugget about it.” Rodin is your weaponsmith from The Gates of Hell that makes her trademark guns that are attached on her arms and legs. Luka is a journalist figuring out the mystery with all the umbra witch/lumen sage nonsense and also trying to expose Bayonetta for the assumption of murdering his father. Then there’s Cereza, the little girl you’re run into later in the game that calls you “Mummy.” The story as a whole is not that memorable, but it still is enough to get things going and makes sense once you play both Bayonetta games.

Both Bayonetta 1 and 2 feel synonymous with Devil May Cry 1 and 3 respectively. The original had similar feelings to the first Devil May Cry establishing Bayonetta as a stylish and sexy character and also the rest of the universe. Bayonetta 2 shares more in common with Devil May Cry 3 personally because the gameplay was turned up to 11, combat felt more fluid and the homages catered to that game specifically from the Lumen Sage boss encounters being reminiscent of the Vergil battles and a certain weapon was a callout to DMC3’s fire and ice swords. Bayonetta’s similarities with Devil May Cry shouldn’t be treated as a negative thing since Hideki Kamiya worked on both those games and it shows that he knows what’s up how a great character action game should be made.
Going from the sequel to the original game combat-wise took a bit to adjust to. Firstly, the controls were slightly altered on the Wii U Gamepad. The main difference was that targeting enemies was assigned to a different button than in Bayonetta 2. Also, I had a tougher time dealing with the original’s camera. The game has some camera issues when trying to keep it stable, but that wasn’t a problem in the sequel. Lastly, the weapons weren’t that special compared to the toys Bayonetta has in 2. The only ones I did enjoy using were the ice skates and the rocket tonfas.

While Bayonetta had a deep moveset and enough options to take down the opposition, the addition of Umbran Climax in the sequel, which is basically Devil May Cry’s Devil Trigger, gave her opportunities to deal big damage besides the Wicked Weave attacks. Then again, Wicked Weave damage was scaled to compensate for the lack of Umbran Climax, but it would of been nice if the original had a Devil Trigger-esque mechanic. The Witch Time dodge window, which allowed Bayonetta to slow down time for some seconds after dodging an attack, is also more forgiving in the sequel than the first game even with the Bat Within ability.
The first Bayonetta also was filled with questionable design decisions, mainly the instant death quicktime events. There were moments that the game doesn’t explain how to time these button presses in some QTEs, which resulted in some deaths and penalties in the chapter rankings. Speaking of penalties for the end of chapter results screen, the usage of items was penalized here and not in the sequel. Another reason Bayonetta 2 is a bit more generous with certain aspects of the gameplay along with no loss of health when falling into a bottomless pit. The motorcycle and Space Harrier-like levels were fine for me though as the music used were great nostalgic moments.

I also loved the easter eggs throughout the game beyond the After Burner and Space Harrier music since this was published by Sega on Xbox 360 and Playstation 3. The nods to past Capcom games and Platinum’s previous efforts before they became Platinum Games were a nice touch to the point I chuckled hearing them during cutscenes. Devil May Cry, Resident Evil, Viewitiful Joe, Okami and Sonic the Hedgehog were the some of the games Bayonetta used as references.
Then there’s the Nintendo costumes as see you in the images above. The Peach and Daisy costumes were great with Bowser’s hands being Wicked Weaves and coins replace halos. However, I played with the Link costume the most since one of the swords Bayonetta uses gets replaced with the Master Sword and the Hylian Shield can be used to parry enemy attacks without requiring another item. Of course, rupees were dropped from enemies as halos are a cool thing too. I was disappointed with the Samus costume because the charge shot, screw attack effect and morph ball weren’t in the first game compared to Bayonetta 2.
Bayonetta looks okay on the Wii U even though you can tell it is a port compared to how better the sequel looks. While the framerate holds up at 60 frames per second for the most part, it does take a nosedive especially in the later boss battles to the point it goes less than 30. I wasn’t sure if the slowdown was intentional with Witch Time being on throughout specific battles, but fortunately the framerate issues weren’t much of a problem in Bayonetta 2. Off-TV Play is also included just like in the sequel which looks fine on the Gamepad itself. The soundtrack is typical Platinum and that’s always great along with the addition of dual voices. 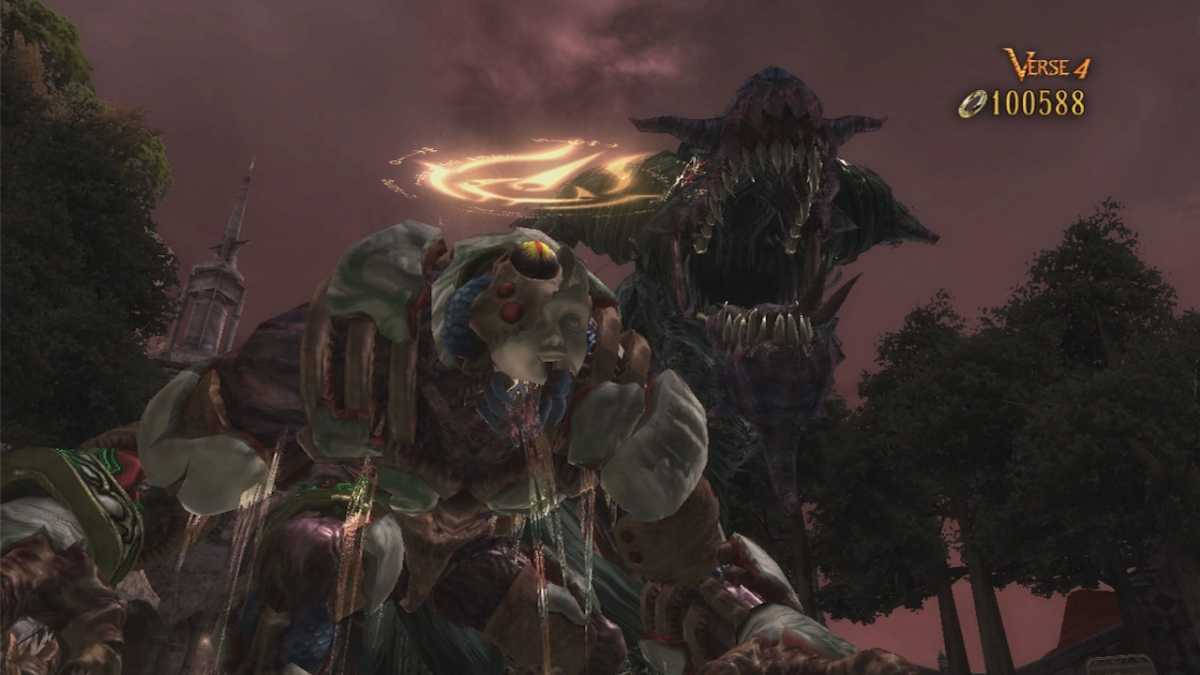 Bayonetta at the time it originally came out was something special. The sexual innuendos she provided were cutting edge in terms of shock factor especially whenever she summons her demons to finish off bosses and it is something expected in the sequel. I still consider it a great character action game that is up there with the games I mentioned earlier, but Bayonetta 2 improved on the combat drastically with better weapons, the addition of Umbran Climax, and more mechanics that were more forgiving such as Witch Time. My guess with the generosity in the sequel is there for Nintendo fans to have an easier time especially for those playing the franchise for the first time. I don’t see myself replaying the first game that much compared to Bayonetta 2, but it still felt good to finally play through it to see why it was a cult classic back in 2010 and deserved the sequel this year. The Wii U port of Bayonetta is worth playing especially since it comes with Bayonetta 2, but the differences are definitely there if you’re going back and forth between those games.