Rise of the Tomb Raider Review

"A Legend's Rise Back to the Top"
By: Jeffrey Dy | Xbox 360 Reviews - Xbox One Reviews | November 12, 2015
The Tomb Raider franchise has it's share of ups and downs from Lara Croft's quick rise to stardom on the Playstation to her lowest point with Angel of Darkness. While Lara has been slowly climbing back to the top of the mountain last console generation, it wasn't until 2013's modern reboot that brought something special despite it's flaws. Imitating the imitated, in this case the Uncharted series, wasn't a bad idea but it needed more of the actual namesake: tomb raiding. This is where the reboot's sequel comes into fruition simply called Rise of the Tomb Raider. Rise fulfills those requests while polishing up the gameplay and the result is one of the best games of the year. 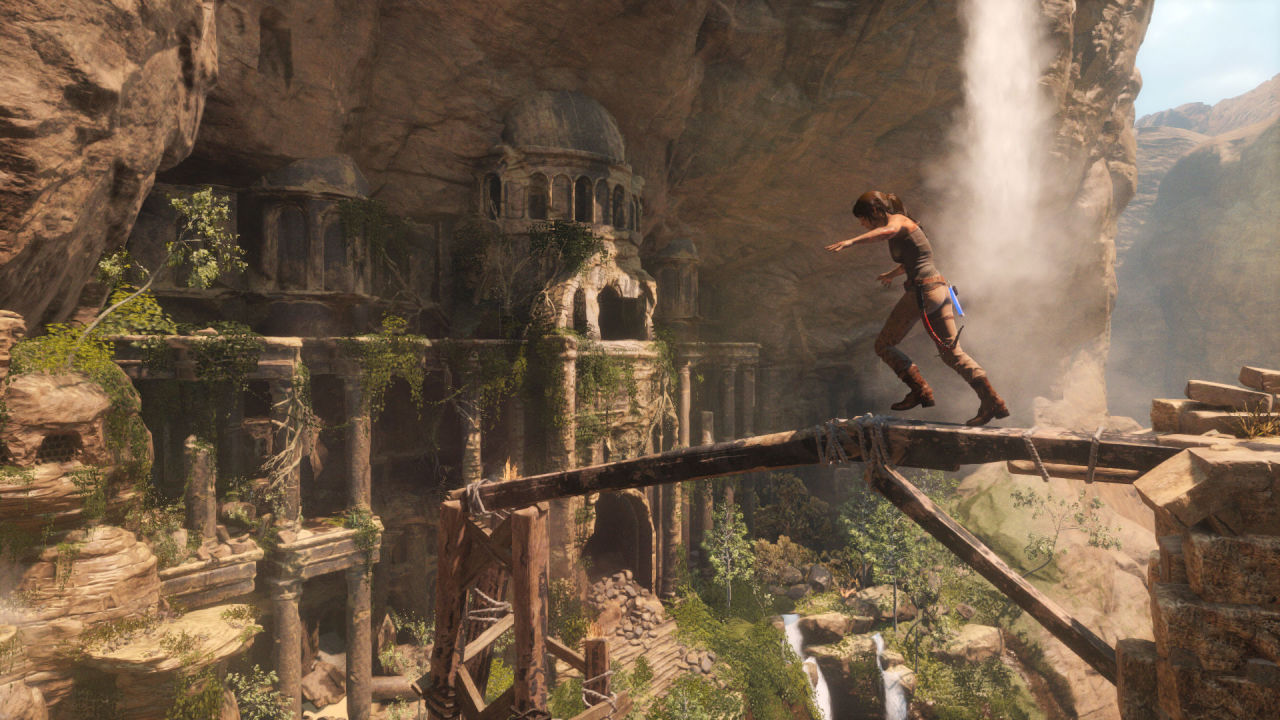 We seen Lara Croft's transformation from survivor to a killing machine in the reboot and while Rise of the Tomb Raider has more of the same Uncharted-esque setpieces and shootouts, there's more open world stuff to do, collectibles everywhere, and beautiful tombs to explore. Lara this time around is trying to finish what her father started finding a legendary artifact called the Divine Source over at Siberia. The evil organization Trinity stands on her way going after the same artifact for the wrong reasons. Along the way, there's predictable plot twists and turns especially in the later third of the game, but the overall storyline is good enough and something you expect from a summer blockbuster movie. Lara's characterization is also fine in this sequel being stubborn to find the Divine Source her way, but also realizing there's more than just exploring these mythical areas when the world is at stake with Trinity around.
Rise's pacing is excellent throughout the main story. One minute you'll be engaged in corridor shootouts against Trinity soldiers, but Crystal Dynamics knows when to break things off when you reach the big open world hub areas where you can do side missions, complete challenges, and solve the challenge tombs' puzzles. These tasks are optional, but they're definitely worth doing because of the in-game rewards Lara gets from more skill points to be used on the skill tree, special abilities, new outfits and certain weapon upgrades. Audio logs, relics and hidden caches are everywhere throughout the game as whenever I looked at the map, it's similar to the Batman Arkham and Assassin's Creed games in terms what to find and collect to accumulate more skill points. The challenge tombs (yes there's more than the last game) are brief yet fun puzzles to solve whenever you run across them. Backtracking to previous areas is also worth it checking out areas that required a specific item you didn't get early on, so there's that Metroidvania aspect going for the exploration too. Combining all the collecting and exploring, Rise of the Tomb Raider is surprisingly a long game at around sixteen hours, which is refreshing these days for a game like this. 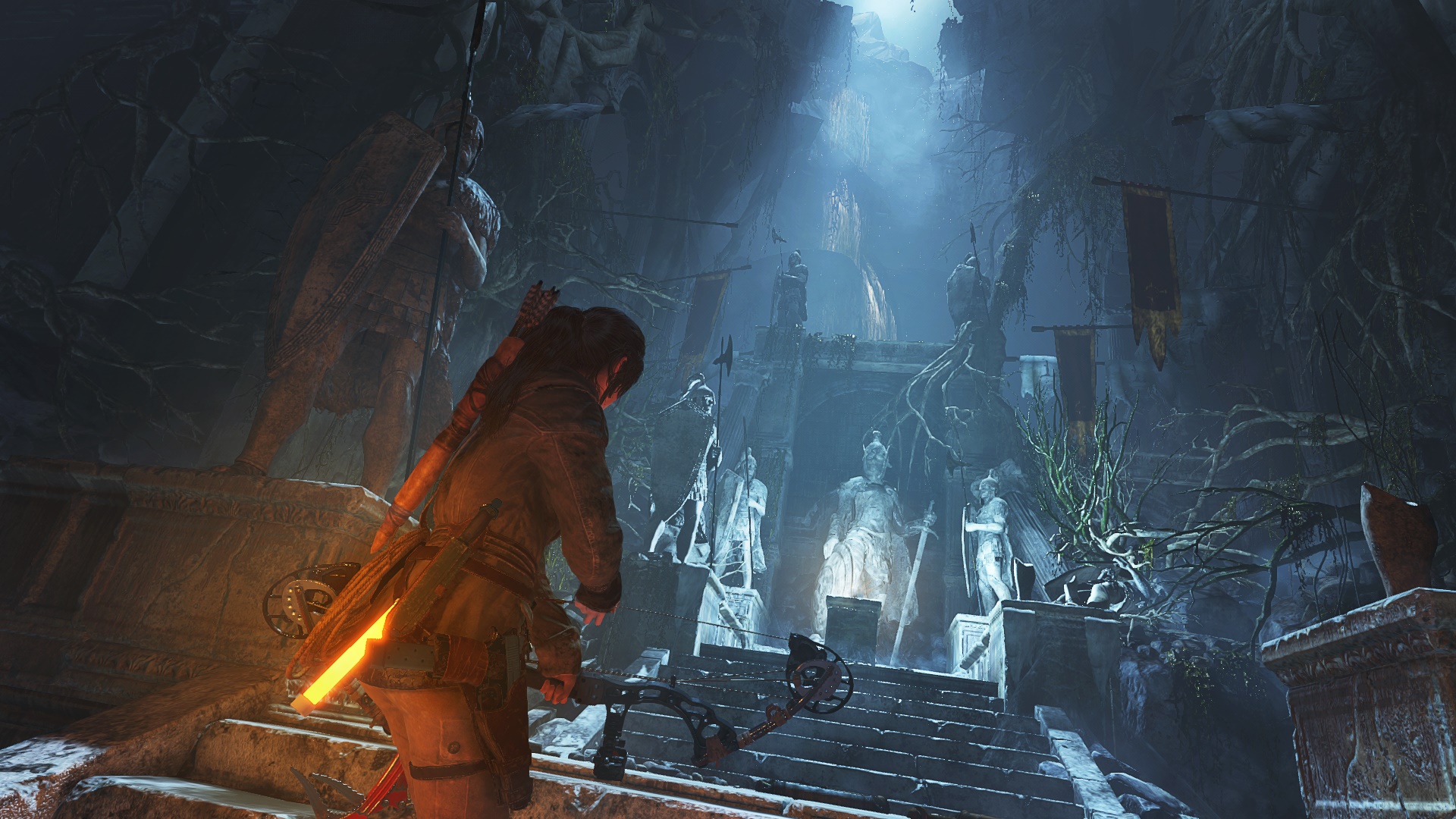 The combat also feels polished up from the reboot. Lara can still shoot her way through enemy encounters, but she has more tools at her disposal to mix things up. In a way, these encounters are another puzzle to figure out who to take out first stealthily from behind or a tree above and then improvising if you get seen. The crafting system is simple to understand collecting the necessary resources to craft up grenades, molotov cocktails, poison arrows, armor-piercing ammo for guns and more. Specific resources also can be gain from hunting animals to craft up equipment with more ammo and upgrading weapons. Along with those upgrade paths, there's the skill tree I mentioned earlier to improve skills in combat with improved healing, hunting such as shooting multiple arrows at once and crafting items in quicker fashion. My only issue with the gameplay is the feel of the shooting of the guns, so don't expect that same feel you experience in recent first person shooters.
After beating the main story, there's still some post game stuff and it's cool that Crystal Dynamics included specific dialogue from NPCs after the events that transpired in the ending along with completing what you missed the first time around. The replay value also extends to the Expeditions mode to spice up chapter replays with score attack. Using a card system, yes another game with an unnecessary card system, you can spend cards to modify your replay of certain sections such as big head mode, shooting chickens instead of arrows from your bow, enemies taking more damage, etc. Score attack is also time attack in a way in which you get a time bonus for beating them within the par time, so there's a speedrun element to it along with trying to complete specific challenges and finding collectibles at the same time. Expeditions also has user-generated missions where players put their own modifiers for others to try. Even though I would take this over the lackluster PvP multiplayer on the reboot, it didn't catch my attention as I thought it would. Rise of the Tomb Raider is stunning to look at on the Xbox One and also arguably one of the best looking games of the year. Lots of gorgeous views to take in from the tutorial area at Syria to the mountainous terrain at Siberia thanks to the dramatic lighting Crystal Dynamics implemented. Lara animates pretty well for the most part in combat and in the intense platforming sections where it's pretty forgiving, but there were some jumps that didn't go my way. The framerate is also great at a consistent 30 frames per second and it rarely dips down even in the chaotic enemy encounters. Camilla Luddington reprises her role as Lara Croft giving out a solid performance and the same goes of the rest of the voice acting. Musically, the theatrical movie-like soundtrack is fine for this sequel as well.
While it doesn't bring anything significantly new to the table, Rise of the Tomb Raider is a polished and worthy follow up to the 2013 reboot. The gameplay mechanics are improved thanks to Lara having more options to use against Trinity and the main story paces exceptionally well. The open world hubs are a great break from all the combat with tons of collectibles to find and fun challenge tombs to solve. More of the actual tomb raiding was exactly what this modern era needed tone-wise and we end up with a major game of the year contender. Sure, it may get lost in the holiday season shuffle and also being a Xbox One timed exclusive, but Xbox One owners should not miss out on one of the best games of the year.
Rating
9.0
Pros