Saints Row IV: How the Saints Save Christmas (PC) Review – From Naughty to Nice

By: Patrick Cowles | PC Reviews - PS3 Reviews - Xbox 360 Reviews | December 19, 2013
Though advertised as a holiday classic for the whole family, the latest DLC installment for Saints Row IV: How the Saints Save Christmas, is a Christmas tale best played after little Timmy has been put to bed. True to the naughty nature of the series, the three mission DLC won't replace A Charlie Brown Christmas or Frost the Snowman as a holiday season tradition; none-the-less the stout parody is filled with comical though twisted Christmas cheer. 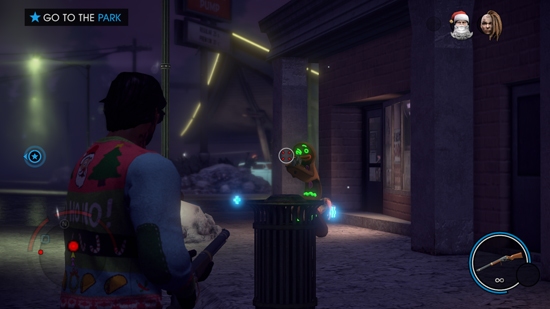 The Grinch that Saved Christmas
Similar to Enter the Dominatrix, How the Saints Save Christmas is another infusion of content that is more comical parody than challenging gameplay. Throughout the three missions you and a partially cybernetic future Shandi face off against hordes of demonic gingerbread men and nutcracker men, archetypal aliens and murderbots from the base game respectively, while saving the future of Christmas from a hellish Saint Nick. If this sounds familiar, you've probably seen Futurama; though instead of saving the holidays from a murderous robotic Santa Claws it is up to the Boss and the gang to defeat the DLC's antagonist Clawz, a mutated and corrupted version of Santa tainted during his captivity by Zinyak. Despite the Bosses' abrasive and apathetic attitude towards the holidays the Saints crew along with future Shandi coerce you into saving not only Santa but the future of Christmas by destroying the wicked Clawz. 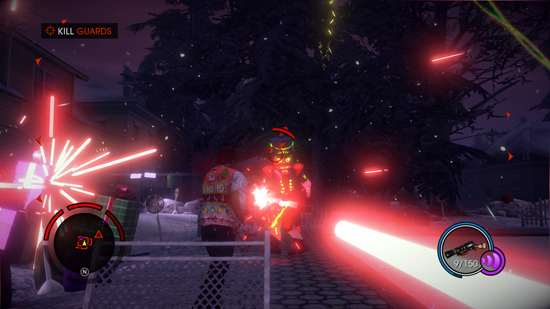 Fortunately for the DLC as an experience, the risque dialogue and parodied jokes fortify the story with enough laughs to make up for the lackluster gameplay. Although there are plenty of gingerbread and nutcracker men, along with a firefight sequence with a turn-coat gang of supersized (human sized) elves; the grinch henchmen of Clawz hit like pebbles while falling quickly to a few short bursts to the torso or a well placed headshot. The final fight with Clawz on the other hand is hardly a fight at all, though certainly a fitting sequence for the setting. With the true Santa Claws at your side, the final mission has you deliver presents and coal throughout Steelport from a minigun-mounted present- hurling Sleigh before confronting Clawz in the downtown square. However, rather than having the player face another Warden dressed for the DLC occasion, the Clawz fight consists of utilizing your powers to light holiday ornaments while delivering presents to civilians in the square and eventually Clawz himself, spreading Christmas cheer throughout the downtown square. 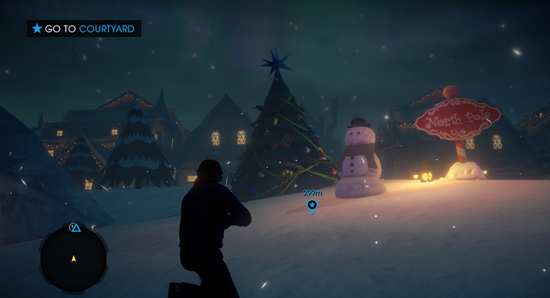 The latest DLC for Saints Row IV is not the most exciting nor innovative gameplay-wise, but it wasn't disappointing, just different. To which Volition still threw in an interesting adaption of the simulation mechanic that supports the setting; during the final mission while flying the sleigh, you experience a digital blizzard which distorts and pixelates your view if you gain too much altitude. If the digital distortions you noticed while in the base game simulation are a head-trip, the digital blizzard in the third mission of How the Saints Save Christmas is a full-blown pyschodelic experience which was pretty neat.
New Toys for the Holidays
As with Enter the Dominatrix the new vehicles, weapons, and homies, are the real value of additional content. Though the storyline for both DLC installments were rife with debaucherous and hilarious dialogue, the new toys are the gifts that keep on giving rather than the missions. 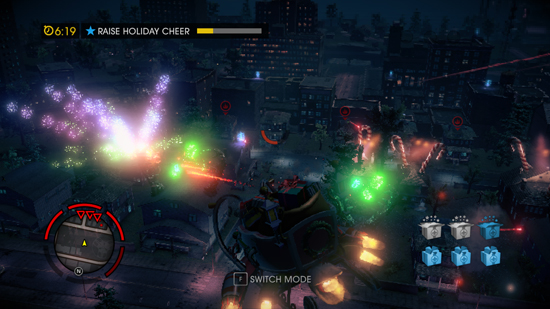 Additional weapons were more scant for this DLC when compared to the previous, however. Rather than introducing a slew of new weapons, Volition only added a single new toy for killing, the Crimson Cowboy pellet rifle (the perfect parody of the Red Ryder BB Gun showcased in A Christmas Story); the other additions include a new skin for the baseball bat, a barber pole inspired retexture called the North Pole, along with a Christmas inspired retexturing of the Dubstep gun with a new holiday track.
The vehicles are where Christmas, Hanukkah, Kwanzaa, and Festivus come early. Among the bunch are the Slayer and Sleigh One, the respective retextures of the alien Void for naughty Clawz and the real Santa, Dasher, a robo-raindeer that is a retexture of the alien hover bike, the Half-Baked gingerbread van, and my favorite of them all the Jolly Compton which is a snow-covered 64 Impala donning raindeer horns and decorative Christmas lights.
Once you've completed the three mission DLC you'll also gain access to a few new homies including; Future (cyborg) Shandi, Mr. and Mrs. Claws, and the badman himself Clawz. As for the Boss, the DLC awards players with an elf costume. 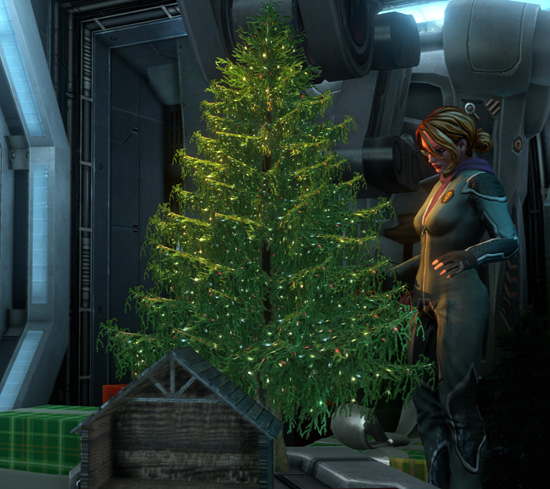 Though the dialogue is a bit more tame to fit the festive season, the incredibly short DLC is still worth the laughs, Easter eggs, and parodied innuendos (they spoof on more than A Christmas Story). However, due to the stout three mission story of How the Saints Save Christmas the real value of this DLC is in the new toys and skins you'll unlock as they are the presents under the tree for content, the story is more of a stocking stuffer.
Rating
7.0
Pros