Science in the Marvel Universe

Since the beginning, science fiction has played a major role in comic books. However, it was during a conversation with a friend that I realized doing science in the Marvel universe is a death sentence. Almost every scientist -- I'm talking 99% -- ends in some terrible tragedy, whether turned into some kind of monster, vaporized by your robot, or shot by some Nazis.

Science is deeply entrenched in Marvel's universe, much more than DC's, even if it's mostly just "science" science. So it's interesting to see how it's often treated. And while I don't think think there's an overarching theme in a universe as big and as old as Marvel's there are a few observations I came up with: Oh man, look at all this "science"!

You see it a lot in Marvel. Scientists too impatient or too egotistical to admit set backs and test their works on either themselves or others. It never turns out great. Ever. No one gets out that situation better than when they went it. Which brings up the question of why they think it's a good idea. Anyway.

Norman Osbourne uses himself as a Guinea pig and is turned into the Green Goblin, Otto Octavius overreaches his boundaries and becomes Doctor Octopus, Hank Pym seeks to create life itself and unleashes one of the greatest monsters in Marvel's history.

Interestingly enough, this isn't limited to villains. Reed Richards and co are irrevocably changed for underestimating the power of the cosmos and Tony Stark nearly died for ignoring the price of using his genius to fill the world with weapons. The difference here being, they chose to turn trauma into strength, the thematic definition of a hero. 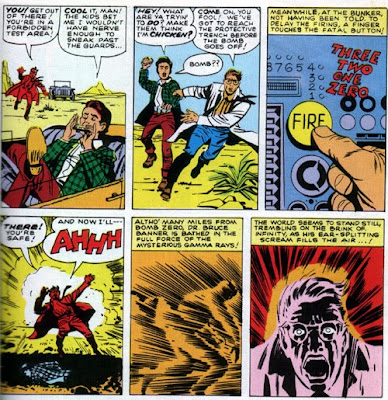 What's Hulk All About?

A symbol of the atomic age, more specifically, the responsibility of the atomic bomb. Hulk is an engine of destruction, much like a nuclear bomb, and is unleashed by irrational anger. Weak, timid Bruce Banner now has the power to cause untold devastation whenever he looses his cool.

But I think the story of the Hulk is that of the responsibility of knowledge itself. Banner used his exceptional knowledge of "science" to create a weapon, and because of that he must spend the rest of his life controlling what he wrought (by the way, he becomes the Hulk after he chose to save Rick Jones. He took up the responsibility of that knowledge and acted nobly).

Bruce has tried to "science" his way out of the responsibility of the Hulk many times, and has only led to disaster and more Hulk. One cannot simply shrug off such weight. If we to commit to the pursuit of knowledge, we must live with what we discover. Good or bad. Or Hulk.

If there's anyone who has benefited the most from science, especially "science", in the Marvel universe, it would Tony Stark. Originally, he gained the shrapnel in the chest from stepping on a landmine in Southeast Asia while showing off weapons for the fight against the Vietcong. I'm not sure if that's been changed in current continuity as that would make Tony somewhere in his 60s or 70s. Although to be fair, I think Magneto is still a Holocaust survivor, so go figure.

Anyway, the core concept remains true. Tony saw the error of making weapons and used his "science" prowess to start helping the world. Over the years he's become more and more ingrained into technology, both physically and thematically. He is the champion of technology, a Hank Pym with more success and less spousal abuse.

But here's the weird thing. Tony is rash, and hedonistic, and he blindly pushes the edge of what his technology can do. Other characters are just like this in the Marvel U, and do you know what they're called? Villains. Villains who usually turn into monsters.

So what's the deal with Tony? Why did he get out of being a monster? You ready for this? I don't think he did. I think since the day he slipped into the first Iron Man suit, he's been a kind of monster. One that helps humanity, sure, but a monster none the less. He can never go back, he can never be "just" a human. Especially during Extremis and I think still now. The technology is a part of him. Tony was consumed by this work and now something else remains. Iron Man isn't just a codename, it's what he is.