"Secrets and Spoilers"
By: Nicole D'Andria | Comic Reviews | February 18, 2015
Are you a fan of superhero teams? Well witness a superhero team you’ve never seen before. This team is full of intriguing secrets and if the series avoids clichéd territory I could see it becoming one of my favorites this year. The Front Line are a famous superhero team. But each member has their own dirty laundry they don’t want the world to know. Unfortunately, they may not have a choice when a spy going by the “superhero” alias Crosswind joins their team with the intention of exposing them all. Writers Jay Faerber (Krampus) and Brian Joines do a remarkable job introducing every member of the Front Line and some of their dirtiest laundry. These aren’t just your run-of-the-mill secrets either. What some of these heroes are hiding promises to create a lot of tension in their futures if they’re discovered. 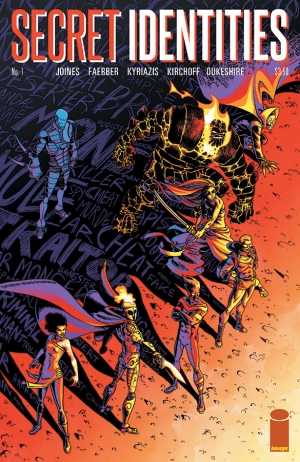 Another thing I like about these secrets is how Faerber and Joines handle them. We don’t know everything about these heroes. We are not made privy to every secret or even to all the details of the secrets we see. It’s smart that the writers are keeping an air of mystery to the story. Hopefully they haven’t unveiled too much too soon. Though what I have in mind when I think of that is not the heroes secrets but the surprise reveal at the end of this issue which, while unexpected, may have been more shocking if we’d gotten to know some of the supporting characters better. It’s also really impressive how no two characters on the Front Line feel similar to each other. Every character has their own unique powers and baggage. However, it’s somewhat hard to pin down their personalities after one issue. Sadly, a lot of their histories were unveiled in the promo images released, so I would recommend avoiding those. Punchline, unsurprisingly a spunky jokester, has some genuinely funny lines. Recluse… well, his name kind of says it all. Vesuvius has a heroic mannerism that makes our curiosity rise when his secret starts to get unveiled and ends up in smoke. Gaijin, an alien whose name I was the most likely to forget because she tended to fade into the background. Helot, a cybernetic warrior on the run from a cult and bad dreams. The rundown on Rundown? He moves superfast… which may not be able to save him from the drama bound to ruin him and his family. Their leader Luminary has possibly the most lackluster introduction and exploration as a character in this issue. The most pivotal thing about her so far is her father’s importance. Otherwise, we see her become a damsel in distress in the first few pages and apparently their PR person, so she hasn’t left the best impression on me. 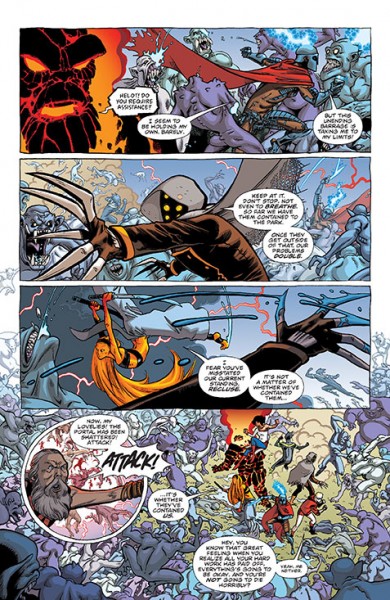 Do the writers have too many characters in their story to function? There are seven characters on the team, plus the mole Crosswind and several supporting characters who are introduced. Since there are so many characters the issue feels somewhat cramped and it’s hard to keep track of each character. I remember a couple of their names but they haven’t all sunk in yet. I really hope this series doesn’t fall into clichéd territory. I’m worried it will try to do the whole “liar revealed” storyline where Crosswind regrets his decision, the team finds out and disowns him which leads, of course, to them reuniting and singing kumbaya. The series artist, Ilias Kyriazis, does a really good job working with colorist Charlie Kirchoff to create the art for this series. It is very colorful and the artwork is solid all around. The emotions on characters’ faces can be understood without even reading the dialogue which makes the brief moments when characters aren’t saying anything still make perfect sense. To fit the uniqueness of each character, Kyriazis makes each character design vary accordingly among The Front Line and comes up with some very appealing appearances. I especially liked Punchline’s punk look and Luminary’s conservative costume and tats. The design of The Front Line’s base is also appropriately disturbing, using the full page spread it’s given very effectively. However there is a lot going on in the first couple of pages and it is easy to get lost in the chaos ensuing on the page.

The same artist who did the interiors also did the cover for this issue. I usually don’t mention the covers of the issues I review (Yeah… why don’t I do that considering I make whole lists about them?) but this cover warrants a response. This is a very problematic cover. The artwork is solid and Crosswind’s position as a mole is firmly established… however, this is the most spoiler filled cover ever. All the words describing the characters on the cover give away a lot of what you’re going to see in the first issue. I almost feel they should have saved the cover for the last issue or a future issue when/if their secrets are revealed. I’d recommend not reading the lists of words trailing behind the characters until you read the issue. Despite the numerous problems I could see this series running into, the spoilers you could easily encounter and the claustrophobia-inducing amount of characters, this is a really good start to the series. There is a lot of creativity in the issues each member of the team is going through. Depending on how future issues go, I could see this being a fantastic series. However, just looking at the first issue, it’s full of snappy dialogue, intrigue and an enticing variety of characters—in other words, I highly recommend picking up Secret Identities #1 so you can start digging up the dirt on these characters. Though I think you’re going to need a forklift…
Rating
8.5
Pros