Shameless – A Long Way from Home Review: Character Development Is Back

Lately it’s felt like the characters in Shameless have been lacking. And it makes sense; between the removal of the Gallagher kids, Kevin and Veronica’s baby-making, and Sheila’s problems at home, there was just too much plot to cover to really delve into the inner workings of each character. There simply wasn’t enough time. But now it looks like the plot has eased off the gas enough that we’re finally starting to see character development return. It was something I sorely missed from the first season, and now that it’s back, the series seems to be stronger than ever.

Take Fiona and Jimmy, for example. Both of them have had some pretty action-packed plotlines thus far in the season, but to be honest, sometimes I forget they’re even together. The intricacies of their relationship have been pushed to the back burner in favor of Jimmy’s dealings with Estefania and Fiona’s struggles with her job and her attempts to get the kids back. But in “A Long Way from Home,” we see the little ways in which their relationship is cracking apart.

We see the sacrifice Fiona is making to give the kids a good life, trading in her freedom and sense of normalcy to keep the family together. And we get a look at how Jimmy reacts to all this; it’s clear he loves Fiona, but he has doubts about throwing his own life away to be with her. He also faces the moral dilemma of keeping Estefania happy at whatever cost necessary, becoming a terrible boyfriend in the process. By the end of the episode it’s unclear if these two will make it together. And it’s not for the typical outlandish reasons (Jimmy’s dad slept with Ian, or he has to marry a drug lord’s daughter) but for a very real and much more painful one: perhaps their lives will never quite fit together. 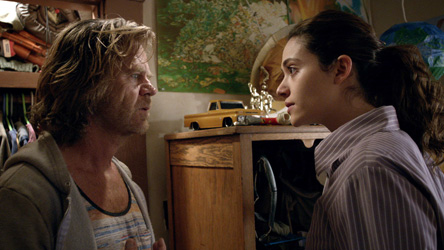 And finally, the resurgence of Jody’s sex addiction is getting some attention. It had bothered be for the last couple of episodes that his increasingly disturbing sexual requests were getting only minimal screen time; obviously it’s pretty serious if he had to go to rehab for it in the past. And the attention it did receive was all comedic. In this episode we finally see Sheila lose it and declare her household unfit to raise a baby in (she actually ends up losing Hymie to his other grandmother). It was overdue, as was Jody’s intervention. Obviously anything involving Sheila and Jody is bound to be comedic because they’re inherently funny people, and it’s true, Jody’s addiction is largely still considered funny. I have no problem with that. I’m just glad a line has been crossed and the underlying seriousness of it has been addressed.

And speaking of Sheila, we finally see the return of a character who has caused trouble from day one: Karen. When she left seemed to be the end of Lip’s character development, as well as the dynamics of Sheila’s household. With Karen’s return we get to go back to Lip’s inner struggle to get over her, as well as Sheila’s desperate need to care for her daughter. Lip has been more or less put on the back burner character-wise (we only find out now that he’s in his third semester of senior year) and hopefully with Karen back we’ll get to focus on him more. He is, after all, one of the most interesting characters in the series. This new Karen seems mature and humble, but how long will it be before she goes back to crumbling the lives of those who love her? She was the link between the Jacksons and the Gallaghers, as well, and now that she’s back we may see more interactions between them, which was another thing I definitely missed.

And those aren’t the only characters we get to see inside. Debbie’s desperation to escape what is essentially a sweatshop is detailed, as well as Ian’s heartbreak over the horrors of the previous episode and Mickey’s utter refusal to let him in. We even see a half-hearted glimpse of the actual love Frank has for his kids, however brief it is. And with the freaky goings-on of Kevin and Veronica temporarily put aside, this episode is essentially perfect. If they can keep it up, we’re in for a solid second half of the season.