It’s not often one hears the word “sweet” associate with “Shameless.” But that’s just what this ‘Civil Wrongs’ was, in its own bizarre, twisted sort of way. But is that a problem? If the episode was sweet, that means it’s lost its typical edge. To be honest, it was a pleasant enough episode to watch, and I definitely enjoyed it, but it’s left me with nothing to say about it.

Take this whole Karen fiasco, for example. Previously, Karen’s presence had created multiple problems for the people in her life, and her return brought all those old wounds to the surface. Mandy hitting her with the car was certainly climactic, and it gave viewers quite a bit to talk about. Was Karen dead? Would Mandy be discovered? Would Lip find out his current girlfriend killed his ex-girlfriend? As it turns out, the aftermath is much more boring than that. Karen is still alive but in a coma, and Lip is torn apart every time he sees her. His reaction to her near-death is sweet, obviously, and it makes us feel for Lip.

He still cares about the girl who always ruins his life. But the problem is, we’ve seen it all before from him. And this crazy hit-and-run plotline is barely utilized in the way it could be. Sure, Lip discovers the text Karen received before she was hit. I’m sure he suspects Mandy. And Karen wakes up at the end of the episode, which will inevitably lead to problems down the road. But that’s just the thing. This all happens at the end. The in-between stuff is touching, but what coma scene isn’t? It’s just a typical coma plotline, just like in soap operas. And it’s lovely to watch, but it’s not particularly interesting.

The problems between Fiona and Jimmy in this episode are incredibly real and relatable as opposed to most episodes. Rather than their fights stemming from crazy kids, extreme poverty, or car-stealing, this time it’s a simple question of distance. Jimmy wants to go back to med school, and Fiona is slowly getting used to the idea of being a rich doctor’s wife (egged on by her co-workers). The problem: Jimmy has to go back to Michigan to complete his final year. Suddenly Fiona’s not so keen on it anymore. It’s a down-to-earth problem, for once. Is a long-distance relationship going to work? Should Fiona be angry because he’s leaving, or supportive of his dreams? In reality, it’s only a year. This is something that happens all the time, so it’s not really a big deal. But see what I just said? It’s not a big deal. I know plenty of couples who are long-distance for a short amount of time. So for me, this whole plot was a non-issue. I shrugged it off and figured things would work out (although they probably won’t, judging by the show’s typical progression of events). Yes, Fiona and Jimmy finally seem like a real couple because of this. And it was nice to be able to relate to a conflict in “Shameless” for once. But it all just seems like an easy problem. So why should I care? 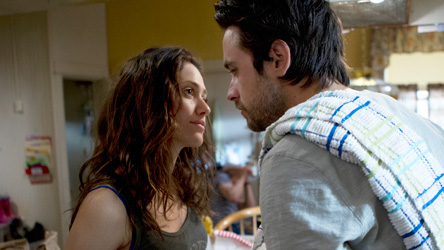 The only storyline that seems to be worth anything is Frank’s. While everyone else is backing off the throttle and getting sticky sweet, his life just getting more ridiculous. When his fame grows with every gay rights event he speaks at, a prominent Christian “healer” approaches him with a therapy program where he can make even more money. When Frank learns this “therapy” consists of free hotel rooms, porn, and sex, of course he’s in. This healing process is the kind of predicament only Frank could get in, as is the ultimatum he’s given at the end of the episode: prove he’s gay, or he’s out. It’s assumed Frank will have to have sex with these two men to continue getting freebies. Will he do it, or will he go back to being homeless? Probably the latter, since nothing good lasts very long for Frank Gallagher. Once again he ruins it for himself. But unlike Lip’s self-destructive pattern, Frank’s is at least creative and absurd. It’s a plotline that hasn’t been done before, and that’s refreshing amid all this pleasant staleness.

What’s odd is that I didn’t think the episode was bad at all. In fact, I really enjoyed it. I felt a big bubble of happiness when Veronica and Kevin find out they’re finally having a baby. I laughed at Jody’s adorably gross solution to Karen’s coma. And I liked Fiona and Jimmy more than I have in a while. It was actually a great episode. But it just wasn’t noteworthy. And I’m not the only one who thinks so. What does this say about us as viewers? Are we so desensitized that when someone finally gets pregnant or has a typical romantic problem, we smile and sympathize but shrug it off? Perhaps this episode isn’t the problem. Perhaps it’s us.