Big changes have come to the Gallaghers and company, leading to a bizarre sense of positivity. I feel strange about this episode. For once things are going right for nearly everyone, even when it doesn’t quite seem like it. When’s the last time the Gallaghers caught a break? While it was nice to see beloved characters finally get a little good in their lives, quite frankly, it makes me uneasy. How long before their lives topple further than ever?

Fiona is a classic example of this unprecedented good fortune. When she takes a tempt job cold-calling for a company, her typical Gallagher antics get her in trouble. She’s called in to see the boss, who’s actually an attractive, friendly, funny man who doesn’t reprimand her at all. In the end, her rapport with him and the humility she shows in front of her colleagues lands her a longer temp stay. Great! But that’s just the thing, right? A temp job is, by definition, temporary. So why does she buy a suit with her hard-earned money? She may have won the day, but a career woman she ain’t. She’s happy right now, but what happens when the temp job ends? And her obvious flirtation with the boss seems great (she gets to keep her job) but how far will that go? Will it get in the way of Jimmy? Her current bliss seems to be setting her up for a drastic decline soon enough. 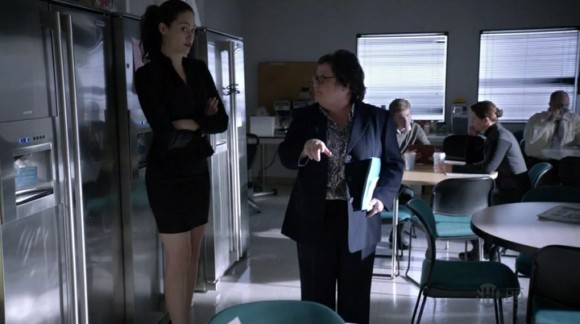 And then there’s Mandy. Poor Mandy, who’s dumb as a rock but seems to have her heart in the right place. The return of Karen has caused countless problems for her, as well as for Lip and Sheila. Of course Mandy is threatened by the vicious scare tactics employed by Karen and Lip’s undeniable magnetic draw toward her. So what does Mandy do? Well, try to kill Karen in a hit-and-run, of course. Now, I’m all for Karen dying; I cheered, in fact. And it seems like a happy ending right now. With Karen out of the way, at least three lives have been drastically improved. But can Mandy really sit with that on her conscience?  For whatever else she may be, Mandy isn’t a heartless person. She has to have a murder hanging over her head for the rest of her life if Karen is dead or dies from her injuries. Her brothers may not have cared (it’s implied that they've killed plenty of people) but Mandy’s not like that. She’s a product of her environment, yes, but she’s also above that.

And what would happen if Lip ever found out (which he obviously will)? Mandy loves him; that much is clear. She ran over Karen for that exact reason. But if Lip discovers what she’s done, it’ll be the end of their relationship. And like Lip says, Mandy is good for him. It’s her efforts that have gotten him this far in applying for MIT, after all. Speaking of which, right now it seems like Lip might actually go to MIT to study robotics. Which is fantastic. But will he really do it? Will he really make the journey all the way to Massachusetts and leave his family behind? I suppose the real question is, would the writers want to take the show in that direction? Probably not. It’s depressing because we know it won’t happen (unless Jeremy Allen White leaves the show), but we want it to happen so badly. And this whole MIT plotline just gives us unnecessary hope.

And who can forget Frank’s story for the episode? What begins as a scheme to get Christopher’s health insurance turns into Frank accidentally becoming the poster child for the gay rights movement when one of his famous rants lands on Youtube and the news. Christopher kicks him out as a result, but Frank is taken in by the gay community and offered a chance to be the gay rights movement’s “Joe the Plumber.” Frank, of course, takes the offer, since freebies are involved. And that’s wonderful. Frank gets a place to stay and hopefully a shower, and the movement gets a new face. But the problem is, no one knows Frank is straight. What happens when that gets out? Or when Frank has to prove he’s not straight? He could end up doing some real damage here, on a national level this time.

Watching ‘Frank the Plumber,’ you might be struck at how generally upbeat the episode is. Yes, things aren’t so great for Ian (or Karen, for that matter) but a lot more goes right than in a typical episode. But think about it for a moment. When has anything truly gone right for the Gallaghers? It’s only a matter of time before the downslide starts.