Shameless – Where There’s a Will Review: The Toppling of Stability

As I’ve said before, one thing “Shameless” seems to accomplish that other shows can’t touch is a running theme throughout each episode. It’s hard to fathom just how difficult it is to have a theme without being over-the-top cheesy. Remember that horrid 90’s show “Thirtysomething?” It’s a classic example of theme gone wrong. But “Shameless” proves that it is, in fact, possible to deal with a central theme without beating the audience over the head with it. In ‘Where There’s a Will,” the Gallaghers (and the people who orbit them) seem to all be struggling with one shared concept: the upset of stability.

Obviously the most widespread example of this is the stability all the Gallaghers lose when their home is threatened. Patrick threatens to turn them out, using a forged will signed by the (long-dead) Aunt Ginger. Personally, I sometimes feel that the Gallagher home is just as much a character as the people who live in it, so this is the ultimate toppling of permanence. Yes, they find another house that would probably do a decent job, but it’s just not the same. So of course it makes sense that the Gallaghers do everything in their power to get it back. It didn’t ever feel like a solid threat, though, for reasons I already explained. 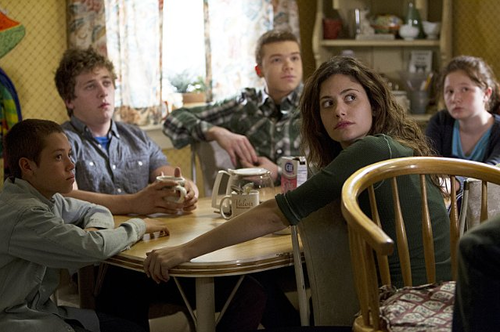 The Gallagher house is a fixed part of the series, and there’s no way Fiona and the gang would be transplanted to a new location. It just doesn’t make sense in the scope of the narrative world. So although many attempts failed, it was only a matter of time before a plot to get rid of Patrick succeeded. The balance is restored, in this aspect, at least. But what about Carl? He attempted murder, in a very literal sense. Will this taste of the morbid create a newfound "interest" for Carl? Will the balance be upset in an even bigger way than losing the house? Guess we'll have to find out.

But this stability is challenged in other ways, as well. The return of Karen has caused a chain reaction stemming from her secret ulterior motives. She’s already affected two people since her recent return, causing Lip to dump Mandy and orchestrating the removal of Hymie from Sheila’s house. By overturning two long-established plotlines single-handedly, Karen has become the embodiment of disruptions (which we knew she already was). How long before she ruins it for Jody, too?

We’ve already seen her unintentionally tempt him from his recovery (though it’s reasonable to suspect it wasn’t so unintentional). Obviously I hate Karen; who could like her? But she's one of those characters I love to hate. Lip will obviously be a wreck from here on out, but to me her return is welcome. Someone needs to shake these people up.

And of course, there’s the continuation of the bizarre triangle formed by Veronica, Kevin, and Carol. And this disruption, while affecting the fewest people, is probably the biggest of all. When Carol begins showing up for their “sessions” fully decked out with a hot outfit, candles, and mood music, suddenly all this feels more like a hot date than a necessity for procreation. And who can really blame her? If she’s going to carry around someone else’s baby for nine months, she might as well make the conception enjoyable. But the problems start when it looks like she enjoys it a little too much.

The Gallaghers losing their house would just mean a new location, and Karen’s return only disrupts the already-weak relationship between Lip and Mandy. But this…this newfound attachment threatens to upend the most consistently solid relationship of the show. How does Veronica handle this? What do you even do when your mother forms that inevitable attachment to your husband after you force them to have sex? Can you really fault Carol for this? And at the end of the episode it’s revealed that Kevin has started receiving sexy texts from Carol. How on earth does the goodhearted Kevin manage to make this right? It seems inevitable that someone will get hurt. It’s a little like watching a car skid toward the ditch on the ice. There’s no way anyone can stop it, but it’s painful to watch.

The best part of the episode is that not all characters lose stability. In fact, Frank ends up gaining it in the form of an oddball roomie. The unintentional creepiness and sunshiney attitude make for the perfect comedic break from all this disruption. And Frank finds a new place to call home--at least for now. Christopher, accidentally the ideal profile for a serial killer, has honestly become one of my favorite characters. Not only does he provide some fantastic comedic relief, but he also brings out a side in Frank we don't often see: his geniality. Frank is a man who, despite everyone telling him that his new free housing comes with a murderer, shacks up with him anyway. I choose to see it as Frank's refusal to judge a book by its cover (instead of just his cluelessness). This change for the good amidst the turmoil of the episode keeps the plot as a whole from getting too preachy or daunting.

The theme of breaking stability was strong in ‘Where There’s a Will,’ but in no way was it heavy-handed. Each character experiences a mini-crisis when the life they’re used to is threatened. It’s an elegant avoidance of cliché, and it’s truly enjoyable to watch.