Sing Party Review: There Are Better Parties Worth Going To

There has not been any karaoke games that came out the same day as a console’s launch if I remember correctly, and Nintendo’s Sing Party looks to be the first one for the Wii U. Sing Party is developed by Freestyle Games, the folks behind the DJ Hero franchise for Activision. Unfortunately, that franchise is in hiatus because of disappointing sales and the rhythm genre at the time was at a decline. Freestyle Games is back with their own take on karaoke as they focused more on the party elements to get your family and friends involved. It is a different approach to a karaoke games as they are just traditionally have you, a mic, and songs to sing. Other than that, Sing Party is just an average karaoke game that needs more to hang with the competition like Sony’s SingStar and Microsoft’s Lips.

Two main modes are the bread and butter for Sing Party. The sing mode is basically singing the songs by yourself and getting high scores. There is also a level progression system depending on which awards you get after performing a song, but it is nothing much than just bragging rights on the Miiverse community. The big disappointment with this mode and Sing Party as a whole are the lack of music videos for the songs when you’re singing them. I can see why they don’t want them in the party mode, which I’ll talk about in a bit, but leaving them out in the single player mode is inexcusable. Instead, you have a Windows Media Player like background and the words on the screen. Besides that omission, the singing is fine and the game does its job of grading your vocals, power, and pitch. There are also duet and team modes if you have multiple Wii U microphones, but at least one is bundled with the game. 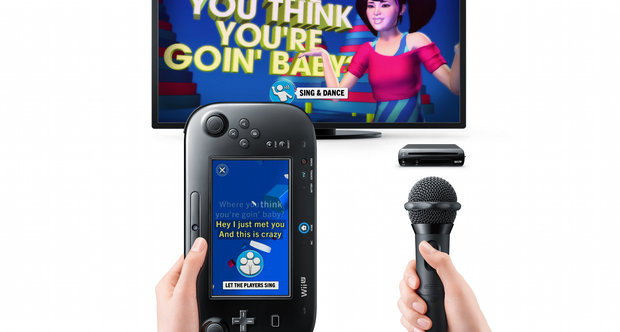 The party mode is where Freestyle Games put more time in and you’ll spend the most time especially with family and friends around. This is also where the Wii U gamepad comes in handy as the singer looks at it for the lyrics where the audience follows along on the TV. They often clap, perform certain dance moves the character shows you on the TV screen (not as crazy as Just Dance or Dance Central however), and sing certain lyrics. There’s also instructions to get the crowd hyped up and involved on the gamepad screen if they feel like it too. This party mode is why music videos are left out in the whole game as the specific lyrics are blasted big on the TV for the audience to sing. The singer is not being rated on performance compared to the sing mode, hence why it is called a party game for a reason, so you can pretty much goof off and sing the lyrics in a different voice if you want to. Besides those two main modes, I just wish there was more features in Sing Party, but I guess you can only do so much with a karaoke game especially if you’re trying to release it on the same day as a console’s launch.

Graphically, Sing Party looks pretty basic from the menus to the actual backgrounds, but good enough for a karaoke game. The game did hard lock on me twice when I got my Wii U the first day it came out, but it has not since then, which is why that was something minor. When it comes to these karaoke games, the soundtrack is what really matters as it pretty much hit and miss. There are songs for every generation from “Y.M.C.A.” and James Brown’s “I Feel Good” to more modern hits you hear on the radio today such as Carly Rae Jepsen’s “Call Me Maybe,” The Wanted’s “Glad You Came,” and “Party Rock Anthem” by LMFAO. Honestly, I only liked a handful of songs that are available to sing now and hopefully more songs are coming via downloadable content, but I don’t expect Freestyle Games to release songs as crazy as Harmonix does with Rock Band or Sony with SingStar.


Sing Party definitely has the fundamentals for a good karaoke game, but it needs a little more to stand up to the other karaoke games that are out now on Xbox 360 and Playstation 3. The party mode Freestyle Games came up with is a neat idea, but the whole novelty of it can wear off pretty fast. The solo sing mode isn’t much either, with no music videos to look at and only having high scores to worry about it falls short. There is a song or two you likely enjoy to sing from the game’s hit and miss soundtrack and there may be downloadable content on the way soon. Sing Party for the Wii U is worth having around for family parties or hanging out with friends, but you can find a better karaoke game on the other consoles if you have them.