"Resident Evil, Persona 5 & New Dragon Quest Highlight Sony's Latest Efforts for Japan"
By: Jeffrey Dy | PS3 News - PS4 News | September 1, 2014
The Tokyo Game Show is just weeks away and while Japan's "E3" has been lackluster in recent years, there are still announcements to be excited for. Sony continues their press conference tour with their pre-TGS presser announcing their latest plans for the Playstation brand at Japan. Of course, most of the 44 games announced and shown are not likely making it stateside, but few of the bigger games that the US audience will recognize will surely be out here eventually. Sony began with the Playstation Vita because it is still selling well at Japan compared to other regions, notably here at the US. New Danganronpa, Way of the Samurai, Dynasty Warriors & Luminous Arc games were announced, but the big game they had a trailer for is Sega and Tri-Ace's Phantasy Star Nova. Apparently Sega still doesn't want to release a new Phantasy Star game outside Japan and Nova is no exception coming out in November over there. In terms of the system itself, new Light Pink (pictured above) and Danganronpa models were announced with fall releases along with an upcoming firmware update that will include themes. The Vita is still going strong over at Japan and all you can say is that you wish the same can be said elsewhere, but unfortunately it is not.
The PS4 portion of the press conference began surprisingly with western games because I guess they want them out of the way Destiny is out a couple days later than the US release, which is the 11th, and Japan is also getting the Glacier White PS4 bundle as well. Ubisoft was also on stage showing off old trailers for Assassin's Creed Unity, The Crew, and Far Cry 4. Not the start people expected for PS4 stuff, but I guess there's still a Japanese audience for these games. 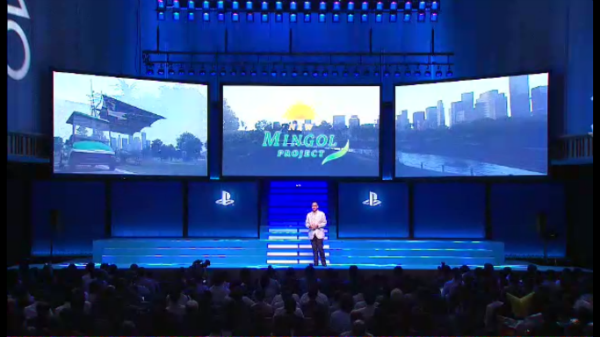 Sony Worldwide Studios' Shuhei Yoshida was next starting off with a new Hot Shots Golf game that will take advantage of the PS4's social and online features. There is also some open world element in the new iteration, but as someone who likes the series back in the PS1/PS2 days, I'm glad to see it is coming back on the PS4. Yoshida also talked about LittleBigPlanet 3, The Order 1886, and The Tomorrow Children with old trailers being played. Japan is also getting a closed alpha of The Tomorrow Children on September 17th, but no word if it is coming stateside as well. Yoshida lastly shows off Bloodborne, which now has a Japanese release date of February 5, 2015. A limited edition with the soundtrack and artwork will be out with the first prints of the game. My guess about the US release date for Bloodborne is that we'll get around the same time or weeks later. 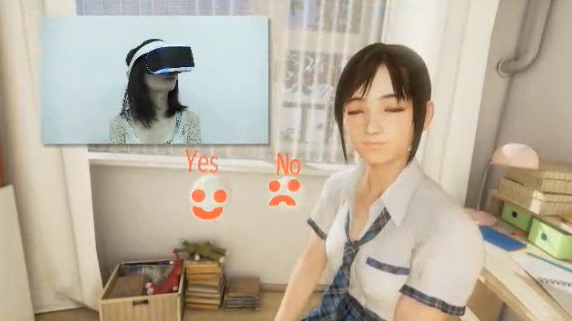 Since we're talking about Japan, things usually get weird with certain genres of games they specialize and that is the case with Project Morpheus. A demo was shown off for Summer Lesson, made by Katsuhiro Harada's Tekken team (gosh he is working on too many projects!) and it is pretty self-explanatory what the game is if the image above is any indication. I'll also let the video speak for itself too. Suda 51 and Grasshopper's Let it Die was also shown along with a new Earth Defense Force game and Disgaea 5 for the PS4. Hideo Kojima was next on stage talking about P.T/Silent Hills along with introducing a video featuring Guillermo Del Toro's thoughts on working with Kojima and Norman Reedus. Kojima also mentioned he is saving new Metal Gear Solid V: Phantom Pain news for TGS in a couple weeks.

Capcom was next with the first trailer for the Resident Evil HD remake (Biohazard for Japanese folks). For those that missed the initial announcement, this is the new HD version of the GameCube remake with better graphics and controls that is out in early 2015 for both last and current-gen consoles. However, that wasn't the only thing Capcom announced this morning. It was rumored a week or two ago and it is now official that Resident Evil Revelations 2 is coming out next year as a cross-gen game. The concept teaser below shows off a different direction of sorts for the series with a new setting and protagonists to play as. Jill and Chris are nowhere to be seen for this sequel, but Capcom will have a longer version of the trailer with more information along with a playable demo at TGS.

It ain't a Sony Japan conference without a new Yakuza game and Sega was there debuting the teaser for the recently announced Yakuza Zero. The PS3/PS4 game does take place in 1988 before the original starring Kazuma Kiryu. Just like Resident Evil and MGS, an extended trailer will be out at TGS. As with recent games in this great franchise, it is a long shot it is coming to the US, but fans here keep your fingers crossed if Sega decides to release this outside Japan.
Namco Bandai Games were next with a plethora of PS4 game announcements especially for the anime crowd. New Dragon Ball, One Piece and Gundam games are coming next year along with a God Eater sequel for both Vita and PS4. Another franchise coming to the PS4 for the first time is Ys, which I'm sure fans of the franchise are hyped a new one is coming.

The biggest highlight of Sony's conference personally for me is the new trailer for Persona 5. Atlus has been quiet unsurprisingly about this highly anticipated sequel since it's initial announcement, but we finally get to see characters and setting for the first time. The big news, however, is that Persona 5 is coming not just to the Playstation 3, but also the PS4 sometime in 2015. Looks like I might not need my PS3 anymore at this rate after this announcement. Just like the Vita earlier in the conference, the PS4 is also getting themes in the 2.0 firmware update, which should be a relief for those that are sick of the blue screen by now.

Last but not at least, was one more game by Square-Enix. Is it Final Fantasy XV? Kingdom Hearts III? Nope. It is a new Dragon Quest game for PS4 and PS3! However, it is a new Dragon Quest game fans didn't expect. The trailer is above is for Dragon Quest Heroes, a new action RPG with Omega Force at the helm. At first glance, it looks like a Dragon Quest/Dynasty Warriors "Musou" mashup with a group of characters taking on hordes of enemies that do nothing at all. A new Metal Slime PS4 was also shown off after the trailer as well.
That is it for Sony's pre-TGS conference. This morning proved that Sony is still trying to make big strides for the Japanese market despite being heavily dominated by mobile games. The Playstation 4 is the new console to get still even though the Xbox One is finally coming out later this week to no hype and marketing at all. New footage for both Resident Evil games and Persona 5 are also exciting for stateside fans and if this many games were revealed already today, who knows what other announcements the Tokyo Game Show will bring in a couple weeks.