I am no fighting game aficionado so when I say Soul Calibur is the best fighting game series in existence you’ll have to keep in mind that I’m not the sort of person who can remember elaborate combos or who counts frames or thinks about things like what counter is best for what attack.

No I come to Soul Calibur because unlike other fighting games I can.  While the likes of Street Fighter clearly have the bigger fan base I simply can’t get in to most games of this genre because it’s like looking at a 1000 word puzzle and being told I have a minute to solve it before the floor beneath me collapses.   I imagine this is the same feeling many gamers have towards Real Time Strategy games which I am actually deeply entrenched in to the point of understanding all their minutia and deeper mechanics and sub-systems.  The reason I bring up RTS’ in particular is because I think it serves my point well to describe Soul Calibur as the “Blizzard game” of fighting games, specifically in regards to how a studio like Blizzard is very - and rightfully so, concerned at making their games as accessible to as many people as possible.  Namco is no different when it comes to the likes of Soul Calibur 5.  As with past entries in the series anyone can pick up this game, play it and have fun and like Blizzard games there exists a depth to its design and features that some people will dig very deep in to but most will not.   However you chose to play is up to you and the various modes and options that exist within can give anyone a satisfying experience. 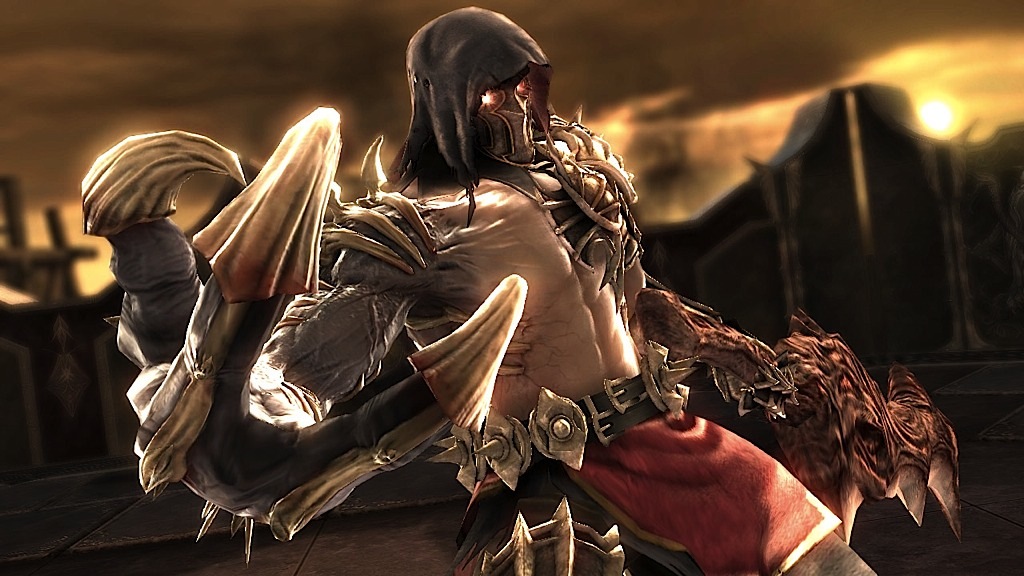 While the story mode of SC5 was touted as a selling point, even being supposedly outsourced by Namco to Asura's Wrath developers CyberConnect2, don’t come to this game expecting much in the way of a pure single player experience.   While I spent almost all of this past Wednesday playing the game offline due to their simply not being many people online I wouldn’t say anyone should play a fighting game in this manner.  You could, and maybe you would have a great time just grinding through arcade mode or battling randomly uploaded AI’s of various difficulties based around people’s custom characters but you’d be missing out on essentially the core of what defines a fighting game which is having fun kicking ass or having your ass kicked with other people.

Make no mistake when you go online with a fighter you should expect the skill level of the player base to be reasonable.  Some will be button mashers, some will be insanely obsessed with being the best.  The few times I managed to find people to fight I got a good mix myself and had a great time, despite losing most. The single player story mode in SC5 is more elaborate and fleshed out than past games but it’s nothing to really talk about, especially if you’ve played something like Mortal Kombat’s story mode and seen how good a fighting game story could be.  And when I say good; I don’t mean well written or even makes sense, I’m talking about raw entertainment value. I’d say SC5’s was a pretty poor offering by Namco.  Only a handful of cinematics are actually rendered with most instead having an awkward motion comic / story board structure to them. The new characters don’t really stand out in any way and like me you’ll probably laugh out loud when you see the leads dead mother show up to guide him, who happens to be a character featured previously in the series who seems to have not aged and is now wearing even less clothing than before. Akward and hilarious, as SC has always been known for. 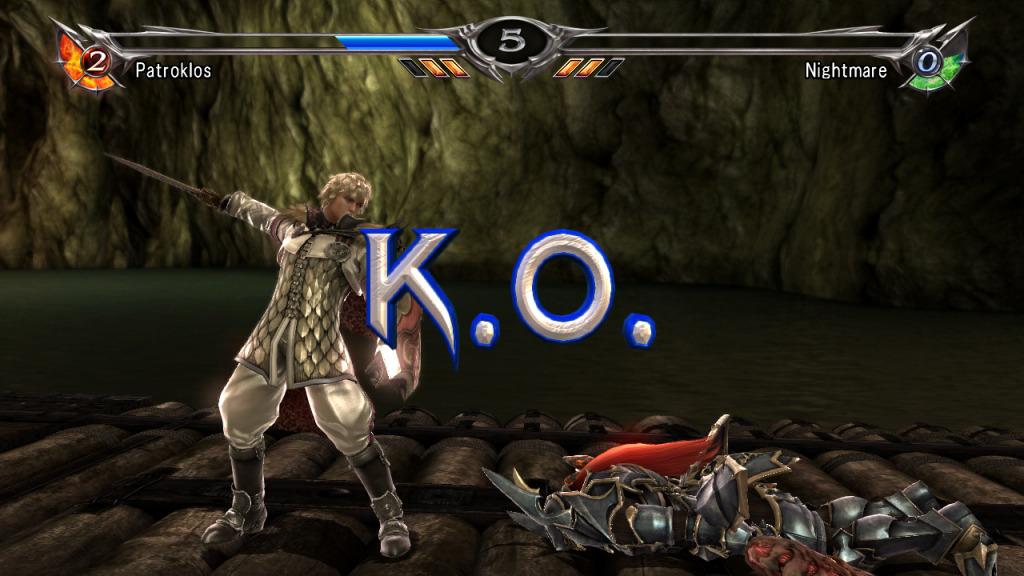 This brings me to a weird choice on the character roster part.  Almost every fighting style from the past games returns but the characters who once represented them are now either sidelined or don’t show up at all.  SC5 is set 17 years after 4 and so it makes sense for a large number of the cast to be changed but when some of the removed characters are replaced with even more generic, less memorable ones it makes the decision seem odd at best.   Yes Taki would be too old to be a ninja if this time gap is so crucial but her daughter Natsu is about as interesting as a glass of milk. Luckily my go-to character remains, being the giant sword wielding Siegfried and he’s still as fun to use as he’s ever been.

Off the top of my head I think it took me just a couple of hours to beat the story mode but arcade and quick battle are much more fun experiences anyway.  Arcade being the standard ranked time completion and skill recording ladder all fighting games have that is fun to replay for the random encounters you get depending on which character you play as.   Quick-battle on the other hand is I think my favourite offline mode as every fighter you encounter is uploaded by someone in the world and may be a random custom creation of theirs or simply a regular character with the cool part being their AI behaviour which is based off the player who made them.  Some will seem downright stupid while others will be super aggressive or focus on things like ring outs with you earning various titles and unlocks with each AI you defeat. 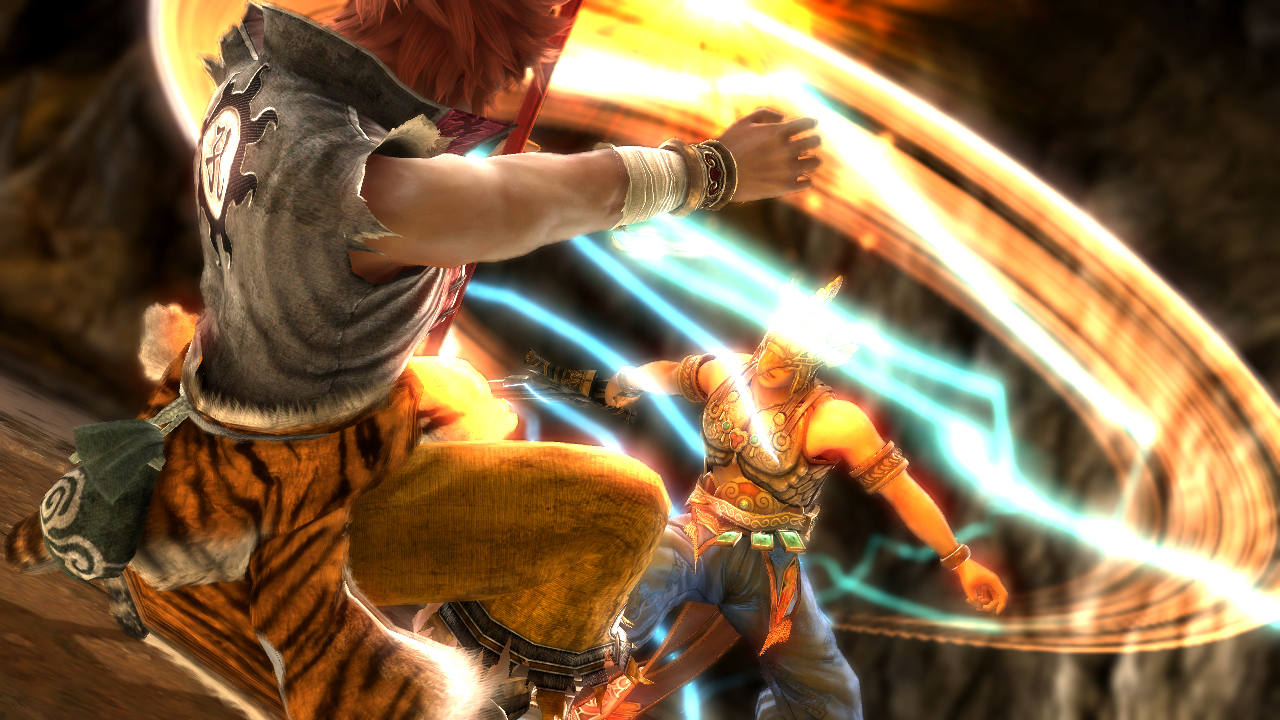 While the core gameplay is almost unchanged, the overall speed increase and new additions like the Critical Edge super-meter finishers coupled with the new faster sidestep give SC5 a subtle change in feel and pace.  I wouldn’t say if you’ve disliked the series play style before there is anything here that will change your mind but perhaps these changes are enough to peak some cynics curiosity. I can't speak in-depth about how each individual character plays but the ones I've always liked seem better than ever and the completely new characters such as the magic orb wielding Viola provide some nice new ways of fighting.  Strangely enough fighting styles from Namco's other iconic fighting series; Tekken show up.  I made a custom character who uses Devil Jin's fighting style, complete with lack of weapons and eye lasers and people are probably beating his virtual ass as I type since I uploaded him to the Quick-battle mode.

Despite getting a nasty blister on my thumb from playing way too much of this game in a single day SC5 is very fun, and as always very accessible fighting game that anyone who has loved Soul Calibur before will do so again and perhaps fighting game pros will give this one more of a chance this time.  However you feel about the series I sure am glad it exists and can only hope more fighters learn from its strong points as time goes on.