By: Patrick Cowles | PC Features | June 1, 2014
Far off planet stationed deep within the recesses of a galaxy where few humans dare to venture and fewer dare to survive rests the realm of the brave and bold Space Engineers.  For those living within the interplanetary divide survival is a far greater struggle than for those nestled in the bosom of life.  Even in the desolation of outer space nothing comes freely, labor and ingenuity is the price Space Engineers to exist.
The sophomore title from the recently launched independent studio Keen Software House, Space Engineers offers PC gamers a unique experience of creativity and survival.  Latticed with a pseudo-realistic 3D voxel-based volumetric physics engine, Space Engineers places the player within the EVA suit of an astronaut far outside the realms of civilization outfitted solely with the tools to survive in deep space. 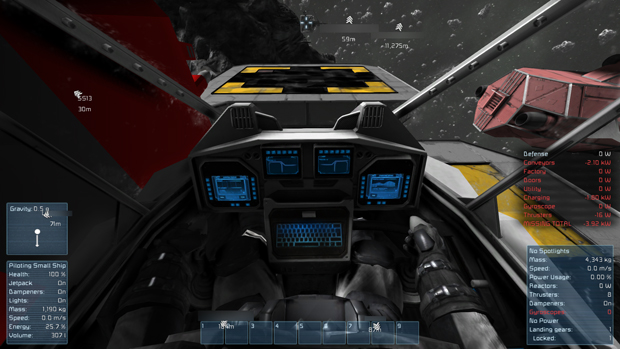 The central design perspective has been to provide gamers with an interplanetary sandbox focused on mining various elements to engineer, construct, and maintain space stations and spacecraft necessary for both survival and prosperity.  Inspired by his childhood passion for Lego, CEO and Founder of Keen Software House Marek Rosa along with the development team he leads have created an experience that rewards a high caliber of creativity over honing ones' skills for controlling a player-character.
In Space Engineers the most successful players are not those that manipulate their space suit or spacecraft with greater tactile control and agility, instead the design concept favors players that engineer better craft and machinery.  Concentrating on construction, what you build is more important than any other aspect of gameplay.
Head To Toe Operation
The design concept of engineer first, mine and refine second, construct last works well for the title, now within its thirteenth month of development.  Over the last few months a steady stream of updates have provided players with a greater diversity and magnitude of construction objects allowing for incredibly complex and massive projects. 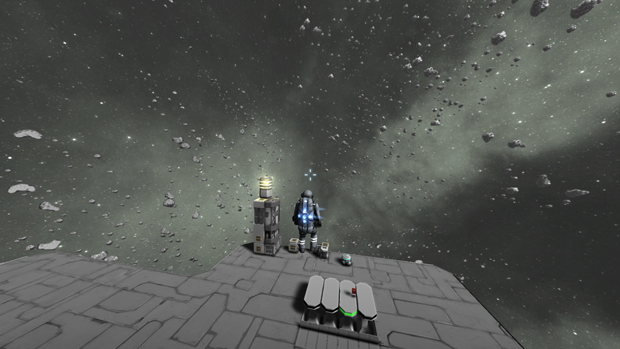 None the less, building a massive station for mining, refining, and assembling the ingots and components needed to further construct and optimize your operation is a time consuming and laborious process without helping hands.  You honestly have to mine, refine, and build everything; unless you tear apart what little you start with and salvage what you no longer need throughout play.
Though Space Engineers offers two modes and a suite of starting conditions, you begin with the bare essentials of an open and barren station and perhaps a simple vessel providing a mobile station.  The imperative difference between the two modes, Creative and Survival, is whether or not death is an option and fuel is perishable.
In Creative mode you can set conditions for unlimited access to construction objects.  Although the game engine limits how many objects a game world can support, the unlimited access condition liberates players from the process of mining, refining, and assembling components for objects.  It best suits those new to the title or those designing, engineering, or experimenting with facilities, ships, and whatever structures you can conquer up. 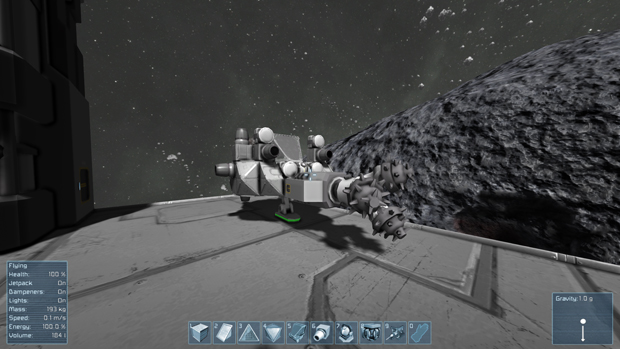 The core experience for Space Engineers that best represents its design concept is relatively new to the game.  Introduced back in March, Survival mode magnifies the gameplay experience through the overarching needs of survival in space; power is expendable and fuel is perishable.  Because of the perishable nature of fuel, mining is a bare essential as it provides the necessary power for your constructions along with your suit and the life systems that keep your spacefaring engineer alive.
From mining by hand to utilizing spacecraft for ore and eventually automating a daisy chain of gravity generators and conveyors to collect and transport the raw materials for refinement and component construction, you and the people you play with are charged with developing and creating your own means of production and therefore progress.  All Space Engineers provides you with is the platform to begin, it hands you nothing else.
Conservation of Matter
From the earliest moments in a new game world there are few options for survival but many ways to approach the process of progress.  Though you can simply start mining and gathering ore by hand, the volumetric engines provides players with a system of unity for matter. 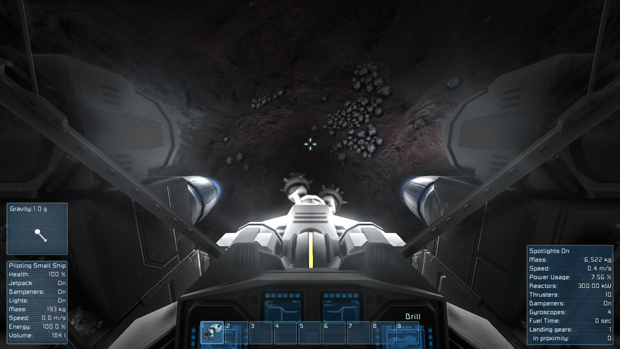 Everything can be disassembled and collected for another purpose, to the same extent you can furthermore damage and destroy anything with no material waste.  Though inertia will carry the voxel-based fruits of disassembly or destruction off into the void of space, these pieces can be easily collected if you are quick or creative enough.
In short, matter is never wasted once you've turned an ingot into a component, it can only be lost.
Outlaw Frontier
If you play Space Engineers alone rest assured that no AI space pirates will raid your facility or engage your spacecraft; there aren't any.  However, due to the scale of mining and production the game is best played with others wherein can lie a threat.
Despite its core concept of station and ship construction, Space Engineers has man-portable and ship-served weapon systems.  You can even construct and program stationary turrets to defend your facilities from tampering or destruction.  If you wish, you can also utilize the projectile weapons for propulsion. 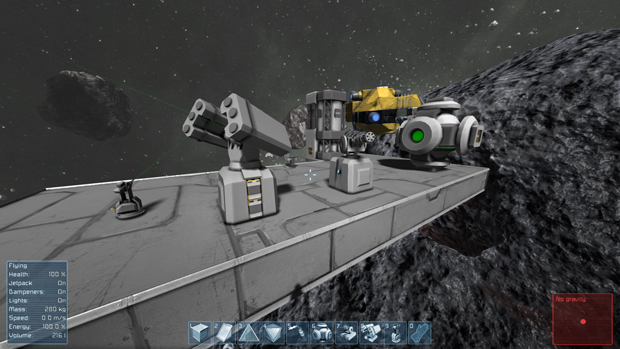 Offering a rifle, Gatling guns, rocket launchers, missile turrets, and interior defense machine gun turrets; the Space Engineers arsenal has enough weaponry for basic military craft and engagements.  Though the turrets can be set as close-in defense weapons, that option provides the extent for dynamic weapon systems which given the core concept is enough to satisfy any aggressive tendencies in the player base.
Naturally, the environment offers an outlaw of its own.
After all, you're in the middle of an asteroid field with the potential for monolithic spacecraft collisions and inertia cares not for what lies between it and endless motion.  To that end the weapon systems can be utilized for means outside of combat.  Turrets can be set to fire upon and intercept rogue meteors, safeguarding stations and vessels alike from damage or destruction by the calamity of matter and physics in a zero-gravity environment.
You can even crater into asteroids using the rocket launcher or warheads for cutting straight to the ore you need, bypassing the tons of stone comprising the asteroids throughout the world space. 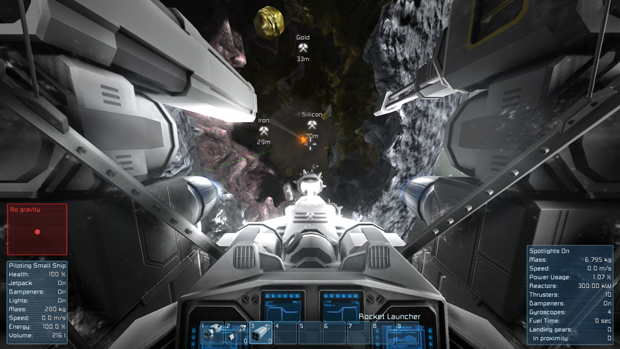 Sights Sounds and Interface
Visually Space Engineers is not impressive which is no problem, neither were Lego pieces.  Rather than developing a visual experience laden with high quality textures and stunning building pieces, Space Engineers provides a bare-bone repertoire of simple model objects which can be painted with a succinct color palate.
Though the models are simple the diversity in building objects provides a wealth of potential for interesting and aesthetically pleasing craft and facilities. Even the static objects such as turrets have been developed with a simple yet appealing aesthetic. It's not a beauty queen visual experience, but it is not ugly.  The Steam Workshop section for Space Engineers presents proof positive testimony to how amiable and awestricking craft and structures can be constructed using the basic building blocks in the game. 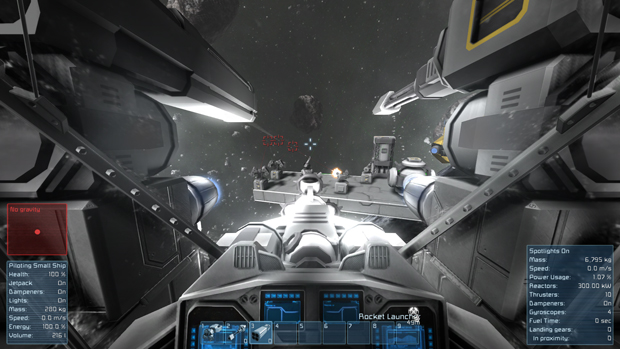 However, despite the great fun that is had by constructing stations and ships there is also fun to be had in destroying them.  Given the game's voxel-based nature for matter collisions are quite a sight to see in Space Engineers.  Small pieces and large chunks alike rend asunder, dent, and contort when stricken with enough force casting bits of components and plates in every direction as the impact force propels them off into space.
Although sound doesn't travel in space,Keen Software House has made compromises towards the extent of realism Space Engineers offers for sound gameplay. There aren't many sounds to it, with no need for ambiance the sounds in Space Engineers are deliberate presentations of stimuli for intuitive gameplay.
Engines woosh when fired, reactors and other mechanical objects hum while activated, weapons erupt with a cacophony of gunshots and explosions, with your jet pack off and sufficient gravity to push your player character onto a metallic surface your boots make a distinctive clink with each step. Spacecraft generate loud whomp and thud sounds when they collide. 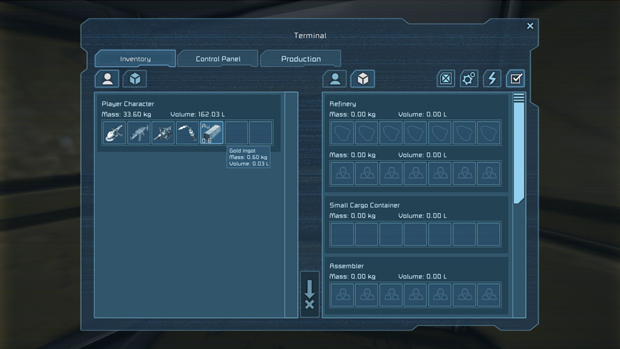 Thus far the best visual aspect of Space Engineers is the user-interface. It is crisp and acute, simple to understand, easy to operate, stands out yet blends in well. The terse Terminal menus give players complex controls over a diversity of systems and means of production effortlessly.  Simple slides give you control over amplitude for gravity generators and other reactors streamlining the process of fine tuning a production facility.  You can easily turn off systems in the same central menu to conserve power, just like the flick of a switch.  Though managing large scale operations can be a tedious meditating practice of clicking and drag, the conveyor systems in-game provide a layer of automation that can significantly reduce the time you spend using the Terminal menus.
The team at Keen Software House has put forth a sound and solid sophomore title with Space Engineers.  Although still in development the game has received impressive improvements since releasing on Steam Early Access in October.  But there is still work to be done.
Now that dedicated servers are available the issue of continuity for playing with others has been addressed, however performance issues still need to be addressed.  Though a steady stream of performance improvements have been a part of each update over the last few months the game engine still needs to be optimized in performing tasks and managing processes for handling the voluminous amount of voxels generating while mining on a massive scale.
With over 500,000 copies sold since launching and a vibrant Steam Workshop community with more than 20,000 contributions thus far, Space Engineers offers gamers with a passion for Lego and other construction toys and games a solid platform out amongst the stars.