Drifting in the desolate vacuum of space, three crew members and a seed pod of matter have reached their target star system. Deep within the Milky Way Galaxy the crew awaken from their cryogenic slumber; they have eight minutes of air within their space suits leaving them with limited time to construct a space base providing the bare essentials for survival, an oxygen rich environment and the means to keep that environment sealed from outer space which lurks ever presently around them.


This is how Double Fine Production’s science fiction space building simulator Spacebase DF-9 introduces you to the void, and the conditions your crew must quickly handle before their precious oxygen dissipates.

Born out of last year’s Amnesia Fortnight 2012, Spacebase DF-9 took off two days ago via Steam in yet another soft launch for PC users. Those familiar with the early alpha access to Arma 3 this past March will have a good idea as to Double Fine’s maneuver. Spacebase is by no means complete, even the development team has been anything but shy about that truth with their verbose published plans for the games’ continued development. What the public has access to is an early alpha client (Alpha 1b to be exact) that gives us a glimpse into the simulator; presently an interactive concept which resembles in gameplay Dungeon Keeper and Sim Ant.


Spacebase DF-9 sets the player to the task of playing the invisible hand to the construction and on-going development of a spacebase to provide a living environment for both human and alien species that dwell within the Milky Way galaxy. Rather than micro-managing the lives of the crew members, players will instead dictate a simple platform of tasks while managing the duties of each crew member; leaving crew member decision-making to the game’s AI. At times the system works well, but accidents and mistakes do occur, usually to deadly yet comical ends. I've had crew members flung into the vacuum of space while the airlock is pressurizing when another member decides to enter the base as well; crew members have also asphyxiated just outside the airlock door after gambling on their space suits' oxygen reserve. Though the lack of control in micro-managing the crew members will result in dire tragedies, enjoying the exploits of your crew is quite entertaining especially when one of your bartenders begins to box with a space raider or monster while security members blast away at the foe.


Your crew members need an essential task to occupy most of their waking time; they have to work at building and maintaining your space base as much as you, they also have to protect themselves and relieve stress from a confining life in space. These jobs are set at the roster screen. From building to mining, maintenance to bartending, and security; the jobs run a small gambit of necessity. A base is constructed by builders yet matter has to be mined in order to provide the crew with construction material, while the machines that provide oxygen to the base or allow miners to refine asteroids into usable material must be maintained by technicians; as for security members and bartenders one must protect the crew from monsters and raiders while the other offers the crew the means to raise their morale from the monotony of deep space. Crew members start with specified values of competence for each job providing diversity in crew skill; though members increase in their competence while working a specific job over time, a poorly qualified technician will damage machines more than they will fix them. Further in the development cycle more jobs will be added to the roster, one of which that is planned for a later release is a janitor who will clean after the crew or dispose of dead bodies. 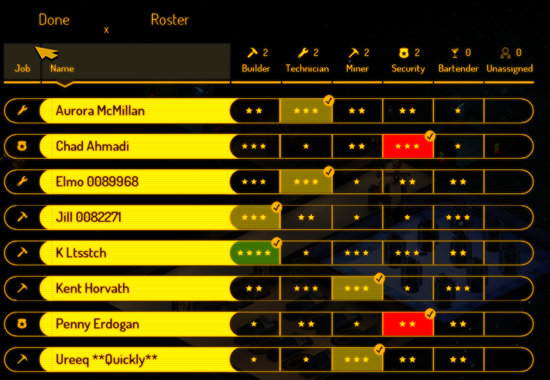 
Building in Spacebase DF-9 is more than simply constructing an infrastructure, rooms aside crew members require essential machines to survive in space such as air recyclers and matter refineries; they also need less bare essentials such as beds and the ever important morale boosting bar. At times as derelict vessels appear in your star system or as you expand a room your crew will also have to demolish things, even broken machinery. For derelict vessels, machines within them may draw the attention of your technicians, if a space raider or monster lurks within that vessel it is almost assured that your technician will use that derelict vessel as their grave; instead of letting junk float about your star system simply set your builders to demolish the thing wall by wall and floor panel by floor panel.


There are also objects which can be placed for aesthetic, though beds are necessary for maintaining morale thus keeping your crew from going space-crazy due to sleeping on the floor you can adorn a residence area with rugs, dressers, plants, and monitors adding decor to the dreariness of life in space. You can even put up neon signs in the pub. 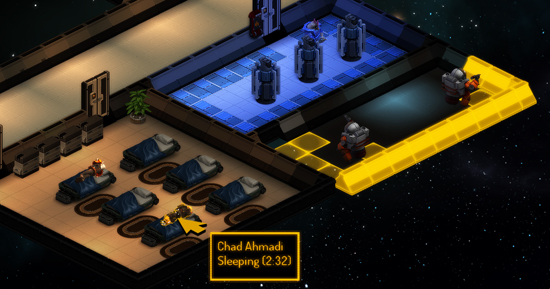 Although their necessity has not yet been implemented, bases in future releases will require power that is provided by fusion reactors.


That’s right, you've already guessed it. Mining in Spacebase DF-9 is just as the dictionary details. Fixed within the star system you choose to colonize are asteroids of varying masses, when mined and refined that material translates directly into the sole economic substance, matter. Matter is used to build everything, from rooms to machines, airlock doors to space suit lockers, it is even used to build plants. However, asteroids over time will be in short supply as your miners pick away at their mass potentially capping your base from ever expanding. Luckily, demolishing derelict or enemy vessels will also provide more matter that will materialize the growth of your base well after the asteroids around it have crumbled to dust. 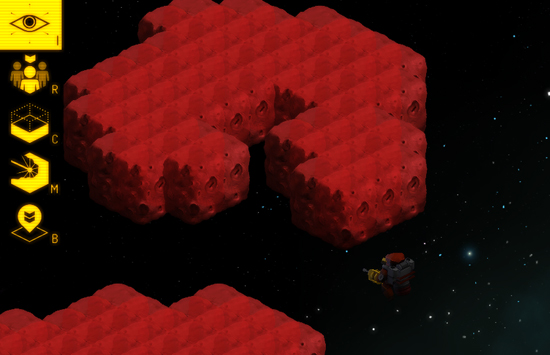 The basic concept is a solid endeavor from developer JP LeBreton and Double Fine Productions; with the project promising much through the published dev plans the potential for this space building simulator is astronomical as a casual, relaxing, and entertaining simulation. 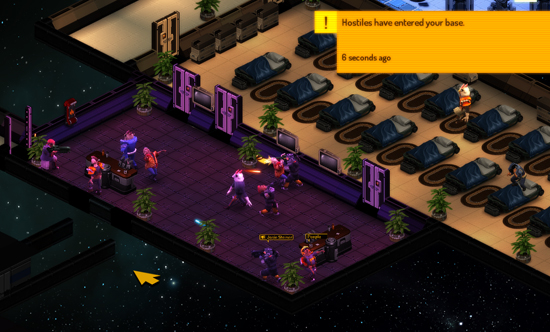