Spartacus: War of the Damned – Enemies of Rome Review – A Solid Start to the Season

I’ll admit I had my doubts over the War of the Damned season as a whole. What else could possibly happen that hasn’t already come to conclusion? Vengeance left us with all its plotlines completed with a nice little bow. Karma had destroyed both the Batiatus and Glaber lines with the deaths of Lucretia, Ilithyia, and most importantly, Gaius. Spartacus had his revenge on the people responsible for the death of his wife. Naevia finally slaughtered her personal demons and killed Ashur, the man ultimately to blame for her torture. The gladiators and slaves are free. What else is left to tell?

Plenty, if Stephen DeKnight has anything to say about it. As it turns out, “Enemies of Rome” introduces us to fresh, fascinating characters and more cathartic bloodshed. We meet Marcus Crassus, a wealthy aristocrat who seems to be Rome’s last hope for funding a larger army. Crassus unexpectedly becomes a key player in the entire season, and the only man who seems to be a worthy match for Spartacus. Crassus proves more competent than both Batiatus and Glaber from the beginning; he understands the threat posed by Spartacus and doesn’t take it lightly.

Perhaps the most compelling quality about Crassus is that he comprehends the worth of a man based not on his station, but on his skill (a trait neither Batiatus nor Glaber possessed). He trains in combat with an ex-gladiator, demonstrating his understanding of the dangerous prowess of trained killers. But he also proves to be a shrewd strategist when it comes to his ambitions, both in combat and in politics. 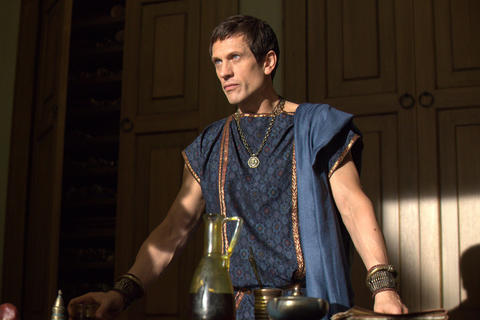 Twice in the episode Crassus shows his almost psychic ability to predict an opponent’s next move; he ends up defeating his gladiator sensei, and he maneuvers Spartacus himself into killing the only men in the way of Crassus’ lofty ambitions. When a man can manipulate his enemy, especially Spartacus, into doing his dirty work for him, you know he’s quite the formidable villain.

Another character to watch out for in the coming season is Crassus’ son, Tiberius. His deadly combination of ambition, arrogance, and childishness seems to be pointing at a Game of Thrones Joffrey-esque level of evil. I hope he lives up to it, because I need another young character to hate as much as I hate Joffrey.

And of course, there’s plenty of the blood and guts we love. I never get used to the crazy, physics-defying blood spewing from throats and severed limbs, but that’s a good thing. And, impressively enough, quite a bit of it comes from Naevia, a character I grew to hate in Vengeance. With the death of Ashur she seems to have grown into a vicious Amazon warrior ready to take down the world. And I love that. Until this point, there had been no truly strong female character, apart from our brief glimpses of Saxa, the blonde warrior. Now Naevia seems to rival Crixus himself, rather than requiring his protection all the time. It’s a level of independence I was always waiting for Mira to attain, but disappointingly she never did. 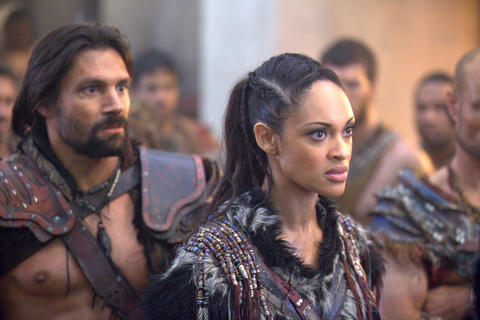 But none of those quite seems to allay that nagging feeling I have, the one that says this season will drag out long beyond its ability. Blood and Sand, Gods of the Arena, and Vengeance seemed like a perfectly packaged series. Their storylines were tight and effective, the characters completed satisfying arcs, and the loose ends tied up neatly. But now I don’t know what to think. Why is Spartacus still fighting?

It seems the show’s writers don’t really know, either. I’ll let you in on a little secret: whenever there’s an inconsistency in a script and the writer doesn’t know how to fix it, they’ll just have a character point it out. And here it is in Enemies of Rome. While at camp, Gannicus asks Spartacus why he’s still fighting if all his enemies are dead. And you know what? Spartacus doesn’t really have an answer, beyond the bland line about freeing all the slaves he’s been spouting off for a while. But he seems very fixated on Rome, still. Surely he’s aware there are slaves all over the world. The plan, and therefore the plot of the entire season, is flawed.

But perhaps I’ll be proven wrong. Crassus is certainly entertaining, and Naevia’s badassery might make up for a failing plot. For now, I’ll hold out judgment and appreciate a solid season premiere.