"The joys of super heroism and high school"
By: Kieran Freemantle | Movie Reviews | July 10, 2017
Since February 2015 when it was announced that Marvel Studio and Sony were going to share custody of Spider-Man, fans of the Marvel Cinematic Universe have been salivating over the prospect of seeing one of Marvel Studios’ version of the character. Audiences got a taste in last year’s Captain America: Civil War and now he has a solo movie: a lighthearted yet grounded take of the MCU. Spider-Man: Homecoming takes places two months after the events of Captain America: Civil War. Peter Parker (Tom Holland) is balancing school life with his super heroics but longs to become an Avenger and gives Happy Hogan (Jon Favreau) daily reports of his crime fighting activities. When he comes across a group of bank robbers with high tech weapons he attempts to find out who’s making and selling them even though Tony Stark (Robert Downey Jr.) tells the teenager he’s not ready to tackle this sort of threat. 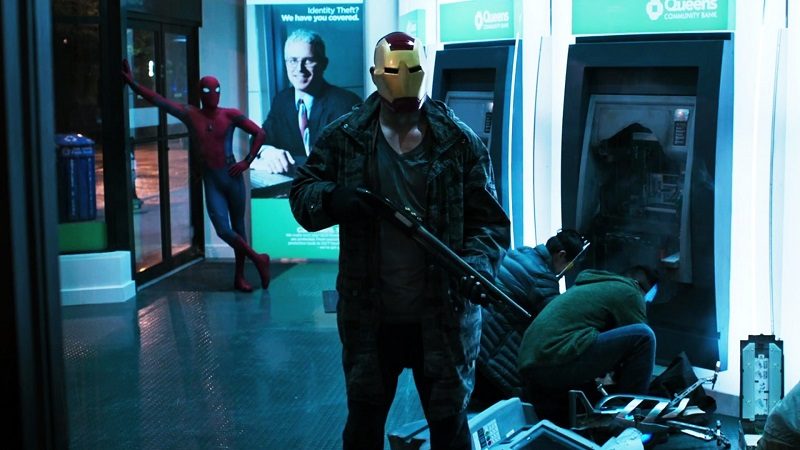 Spider-Man: Homecoming marks the third cinematic iteration of the famous character following the Sam Raimi and Amazing Spider-Man versions. The previous cinematic versions only briefly looked at Spider-Man’s time in high school: in the Raimi version of Spider-Man it only saw him in High School for 30 minutes of screentime and the first Amazing Spider-Man spent about half its runtime with Peter in High School but he was already a senior – so graduated in The Amazing Spider-Man 2. During the Stan Lee/Steve Ditko era Peter Parker was in High School for a few years and Spider-Man: Homecoming embraces the high school setting. In the movie, Peter is a 15-year-old sophomore and he is played by a teenager. The rest of the cast playing Peter’s classmates are in their teens or early 20s and because of this they actually looked like high students and not actors in mid-to-late 20s pretending to be teenagers. Only Laura Harrier as Liz, Peter’s love interest, bucked this trend because she’s 27, but she still looked the part as a popular senior girl.

One of the influences on Spider-Man: Homecoming was John Hughes’ high school-set comedies: movies like Ferris Bueller’s Day Off and The Breakfast Club. Like those movies Peter’s school is filled with quirky characters: his best friend Ned (Jacob Batalon) is a computer whiz-kid who accidentally discoveries Peter’s secret identity, Disney star Zendaya plays a cynical smart-ass who could replace Ally Sheedy in The Breakfast Club and Flash Thompson (Tony Revolori) has been reimagined as a smug jerk instead of the huge jock he has been portrayed in other media. Peter attempts to balance his super heroics and his personal life is like the first two Raimi Spider-Man, in terms of his situation not so much in the tone of the films, an animated series like the 1990s show and The Spectacular Spider-Man. Because of his duties as Spider-Man Peter ends up flaking on his school life – like being a part of the decathlon team and being unable to commit to Liz. 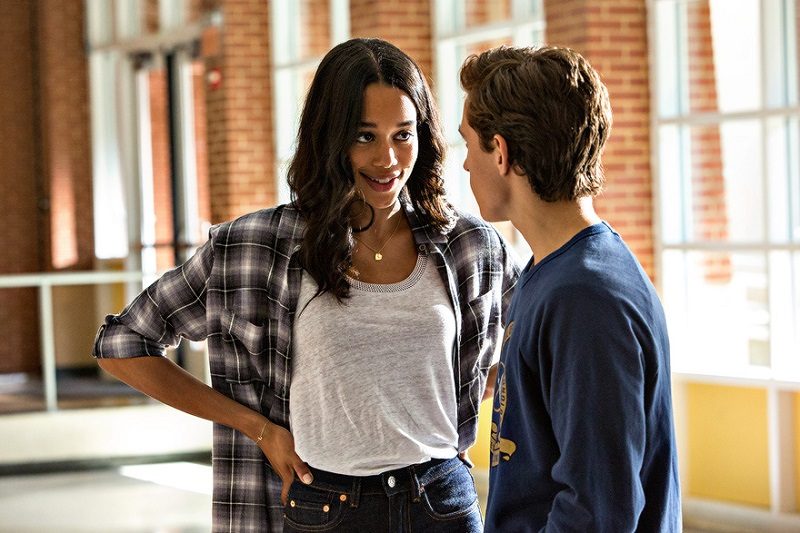 Laura Harrier (left) and Tom Holland in Columbia Pictures’ SPIDER-MAN™: HOMECOMING.
Because of Peter’s young age, he’s excitable and immature and wants to do more than stop street crime. Although he is academically brilliant he has a young personality: he makes a LEGO Death Star with Ned and is incredibly needy as he constantly calls Happy Hogan and continues to investigate the weapons dealers despite Tony Stark warning him not too. Yet Holland’s Peter actually enjoys being Spider-Man: he is having more fun in the role than Tobey Maguire did. Holland nailed all the facets of the character, earnest, energetic and jokey whilst also having moments of angst. Peter immaturity leads to him needing to learn his famous mantra that ‘with great power comes great responsibility’ – and the movie does this without uttering the words. Peter has to learn to be patience, selfless and that being a hero does not just fight the bad guys. Although this is not an origins story Spider-Man: Homecoming is showing Spider-Man is still early in his career, still learning on how to use powers and that he is not ready to fight some villain with superpowers.

Compared to the adventures of Iron Man, Captain America and Thor who have grand world-changing adventures, the MCU version of Spider-Man is a smaller scale adventure – like Ant-Man which was a Marvel version of a heist film. As Tony Stark states that Peter is going for a working-class hero vibe – making Spider-Man more akin to Daredevil, Jessica Jones and Luke Cage on the Marvel Netflix shows who protect their own borough of New York. There are also small details about who the appearance of superheroes has changed culture like a group of girls discussing which Avengers they would f***, marry and kill. The working-class vibe also extends to the villain. Adrian Toomes (Michael Keaton) owns a salvaging company that had the contract to clean up the destruction after the Chitauri invasion but was forced out of business by Tony Stark and the Federal Government. Stark is like the banks during the financial crisis: he causes billions of dollars worth of damage and gets bailed out by the government. It shows how interconnected the MCU is: the Battle of New York had an impact in Agents of S.H.I.E.L.D. and the first season of Daredevil and one of the reasons why the UN wanted to introduce the Sokovia in Captain America: Civil War. Toomes is a DIY-version of Iron Man, he used salvaged alien and Ultron technology to make himself into the Vulture and sell his inventions to street criminals.

A problem with the MCU is its villains underwhelm (the exceptions are Loki and The Red Skull). Fortunately, Spider-Man has one of the greatest rogues galleries in comics and Keaton as The Vulture is one of the stronger villains the Marvel Studios films has produced. This is partly due to Keaton’s star power and charisma, however, it does not take that he has a genuine grievance against Stark (more so than Killian in Iron Man 3) and gives him a personal edge. He also makes some grand speeches about the wrongs of capitalism, although it is wise for Sony and Disney not to make these statements too often. However, The Vulture is really an Iron Man villain in the cinematic universe – like Iron Man he has a powered suit and Spider-Man is just a hindrance to him. Iron Man vs. The Vulture would have been more satisfying fight. Spider-Man: Homecoming also supplies the action, as to be expected, and the movie has a more comedic tone like when Spider-Man has to run through back gardens when chasing a van. However, the trailers for the film does spoiler some of the big action moments: an issue that also afflicted The Amazing Spider-Man series.

Spider-Man: Homecoming respects its heritage. Like the Raimi Spider-Man movie, Homecoming is a traditional take of the character, it just happens to be set in the MCU. There are moments that are homages to the first two Raimi movies regarding Peter’s love for Liz and when Peter tries to save the Staten Island ferry. There are moments in Michael Giacchino’s score that sounds similar to Danny Elfman’s theme for the Spider-Man trilogy and the film even opens with the 1960s cartoon theme. One moment where Spider-Man is trapped is a modernization of one of Steve Ditko’s most iconic pieces of Spider-Man artwork. Spider-Man: Homecoming works as a smaller scale movie in the MCU and gets the tone of the character right – jovial with a sense of levity. It is refreshing to see the high school version of the character in the movies and should have at least one more adventure with Peter and his school friends. However, Spider-Man 2 is still the gold standard for cinematic adaptations of the character.
Rating
8.0
Pros