I'm a Star Trek fan. Not that I cos-play, or engage in techno-babble. I just simply enjoy a good Star Trek story. Mostly Classic Star Trek, when things were simpler. There may have been a time when I entertained the idea that I could write a Star Trek story for the Strange New Worlds anthology series, but that starship has long sailed. Enterprise F, or Epic Fail, I believe.

I really enjoyed J. J. Abrams' 2009 Star Trek film. It was a really cool reboot of the series. It had it's flaws, like the third act appearance of Leonard Nimoy's Spock. But, overall it took Star Trek in the direction it needed to go - boldly going to potential blockbuster status.

I remember when Star Trek: The Motion Picture was released. There was definite room for improvement. I enjoyed reading the Marvel Comics' adaptation and following the short-lived Marvel series. 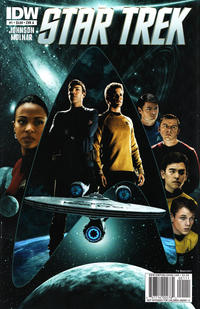 So, when I saw the first issue of the IDW ongoing Star Trek series, I paused, emitted an audible "Hmmm. Fascinating." and picked up the issue.

This new Number One is like the Devil in disguise.

It starts with Scotty in Engineering. Then a beautiful page of the new Enterprise. Next we see Captain Kirk with his academy buddies, Gary Mitchell and Lee Kelso playing chess. They are called to the bridge by Mr. Spock when the Enterprise encounters a distress beacon from the USS Valiant. As Uhura analyzes the data from the beacon, the ship crosses the edge of the galaxy. At the crossing the ship's systems are assaulted and several crew members with high psychic abilities are fatally injured. The only survivor with high psychic ability is Gary Mitchell, Captain Kirk's best friend.

Mitchell is in sick bay for treatment, while Scotty works to repair the warp drive and the senior staff try to assess their situation. They find that Gary is becoming more and more uncontrollable. Scotty's assessment is that he needs a Starbase for repairs. Without warp drive, the journey to a Starbase would take years. Chekov suggests that a stop at the outpost on Delta Vega would help with the resources needed to reach a Starbase. Following the senior staff meeting in the captain's ready room, Spock advises that there are only two options available in dealing with Gary Mitchell: leave him stranded on Delta Vega or kill him before he becomes too powerful to deal with.

This story is concluded in the next issue.

I like this new Star Trek. I never got a chance to read the old Dell Star Trek series, but I did read Marvel's Star Trek and DC's Star Trek. Stephen Molnar beautifully captures the new look of the crew and the Enterprise. All the characters from Abrams' Star Trek are here - even the alien that was at the outpost with Scotty. What's nice is that the entire crew is present. Chekov joined the Enterprise crew in the final season of the series. Bones joined the crew after the premiere episode. 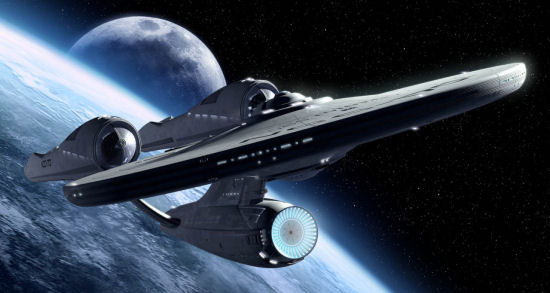 The ship looks awesome. Even the Captain's Ready Room, which is something from The Next Generation, is a nice updating of the old school conference room.

I really do have mixed feelings about this new ongoing IDW series. I've read enough of Peter David's accounts of how notorious Paramount Executives were as far as story content goes. This is a licensed property, so more than likely it will only stick within the parameters of the boundaries set up by the 2009 Star Trek film. It will not deviate to the broader concepts of the television series. Any of them. This is a whole different concept from say, the Young Justice series on Cartoon Network. So, perhaps the only way around that narrow scope on telling "new" stories, is to go back to the future and retell the original stories in this alternate timeline.

This first issue of a new Star Trek series is basically a retelling of the series premiere, "Where No Man Has Gone Before". With some slight tweaks.

So, Star Trek is employing an old comic book story device. Here we have the complete, original crew from the beginning. The trade-off is that, now that Bones is party of the original crew from the start, he is the reason that Sally Kellerman's Dr. Elizabeth Dehner is not part of the story. There is now some unresolved conflict where she withdrew her transfer request.

We also have Uhura replacing original communications officer Alden. Gone, too from the original story is Yeoman Smith.

So, we have Bones, and a strong female leading character in Uhura; but, along with the stories main villain or rogue, Gary Mitchell, there's really no one conflicted. That's the role that Dr. Dehner played.

When Gary changed, he changed totally and completely, instantly. The underlying story was Dehner's slow change, and the possible moral and ethical dilema she faced over the course of her change. Now we are just left with the evil Gary, and the debate between Kirk and Spock over his fate. Obviously, Bones is going to err on the side of safety and side with Spock - even though that would set an unusual precedent - even in this alternate timeline. Dehner provided the curious explorer's voice to investigate what Gary has become. Mike Johnson's updated script of Samuel A. Peeples original script leaves us with just good versus evil.

This is a stunningly beautiful new comic book from IDW. But, honestly, I was hoping for more. If you are like me and saw J. J. Abrams' 2009 Star Trek and film and picked this up hoping for a fix to carry you over to the next film, you might be disappointed. The visuals are stunning; but beyond Scotty's opening in engineering and an updating of the ship and all of the interior Enterprises sets, designs and characters seeing Chris Pine's Kirk and Zachary Quinto's Spock with a Gary Mitchell that comes close to actor Gary Lockwood is a bit of a letdown.

I am conflicted. I want to follow this new series. This new Star Trek is as good, if not better than the original series. I'm sure that original stories will be far, far better. Unfortunately, I have a feeling that until a second or third film is produced, the ongoing IDW Star Trek series will be stuck in...(ah, crap) reruns.