"Rising Up to Superb Gameplay Inside an Unstable Package"
By: Jeffrey Dy | PC Reviews - PS4 Reviews | February 22, 2016
After four beta phases and some surprise online stress tests, it seems like we were all ready for the final version of Capcom's Street Fighter V. Thanks to a little help from Sony, the latest fighting sequel of the premier fighting game franchise is rising up to be the biggest one yet from both casual and competitive aspects. However, Capcom still weren't ready for the launch with unstable online servers and missing features for the casual crowd currently despite superb gameplay.

Fundamentally, Street Fighter V still plays like good old Street Fighter with a 16-man roster of iconic characters, newcomers and some who haven't been playable in over a decade. Despite familiar faces, nearly all of them received gameplay changes style-wise thanks to the game's major additions called the V System. Each character has a V-Skill, V-Reversal and V-Trigger. V-Skills can be activated at any time with both medium buttons as examples are Ryu's parry and Chun-Li's angled jump. V-Reversals are more like bursts in anime fighters and alpha counters from the Street Fighter Alpha series requiring one block of V-Meter to knock or evade an opponent off their pressure if you're blocking. When the V-Meter is full, V-Triggers can be activated by both heavy buttons and they're basically similar to traits from Injustice and Instinct Mode from the new Killer Instinct. For instance Ryu can use faster fireballs with electricity or charge them for a stun effect, Dhalsim can use a flame carpet for players to be burned with lingering white damage and Nash can teleport in front or behind opponents for nasty setups. The V-System makes the game more deep for serious players yet also accessible for casual ones. Some of the cast also received changes in their special move executions as well. Nash doesn't have charge motion moves anymore and Chun-Li's lightning kicks are not mashing the kick buttons. Besides that there's lot of diversity of playstyles in characters for varieties of players in Street Fighter V. Like sticking with the basics? Play Ryu and Ken. Are there grapplers? Yes there are lots of them with Zangief, Birdie, Rainbow Mika and Laura, who also has an interesting fireball and setup game. In your face rushdown? Newcomer Necalli and Karin are your examples. Prefer a keep out zoning game? Dhalsim and the poison focused F.A.N.G. are your choices. There's somebody for everyone in Capcom's new sequel and DLC characters are still coming next month beginning with Alex from the Street Fighter III series. 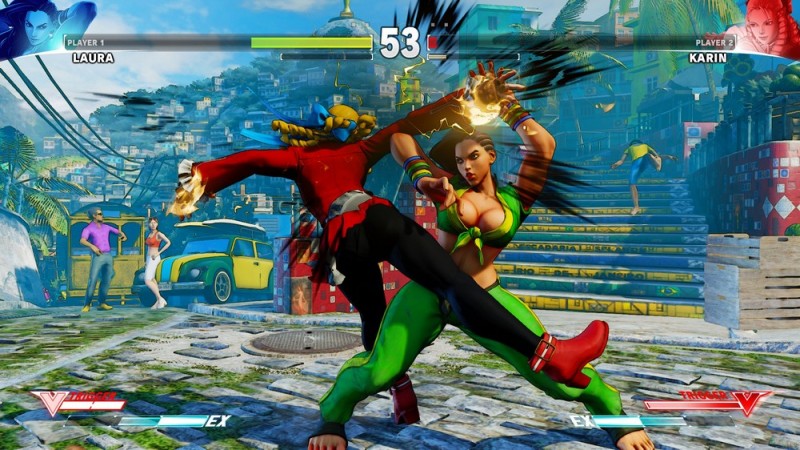 The majority of players entering the foray will be coming from the seven year Street Fighter IV series, but those habits won't work in Street Fighter V. From a tournament level perspective, this is a completely different game as it punishes players hard if they make one huge mistake such as whiffing up a dragon punch. The crush counter system allows for big damaging combos from counter hits that stagger or stun opponents. The combo timing is easier than SFIV as the majority of them don't require one frame links and the game encourages usage of all the normal buttons. Sure, you can still use jabs and shorts to get things going, but they can't be linked to medium or heavy normals anymore. There's also no focus attack shenanigans to worry about anymore and no backdash invincibility for the entire cast.  Thanks to Street Fighter V not as being execution heavy as prior games, this is arguably the most accessible game of the series to jump to even if you haven't touched the franchise in a long time. However, that accessibility can only go so far because the game's forced tutorial is bare bones about knowing the game mechanics. Just follow the directions and boom you're ready to start playing the game as there are nothing in-game that can take your skills to the next level. Fortunately there are lots of information already online and videos to watch even though we are only a week into the game's launch. It's a shame because other fighting games such as Killer Instinct and Skullgirls have way better in-game tutorials than the more popular games of the genre easing newcomers into the fold along with providing the actual frame data rather trying to figure out what they are if you're into that. 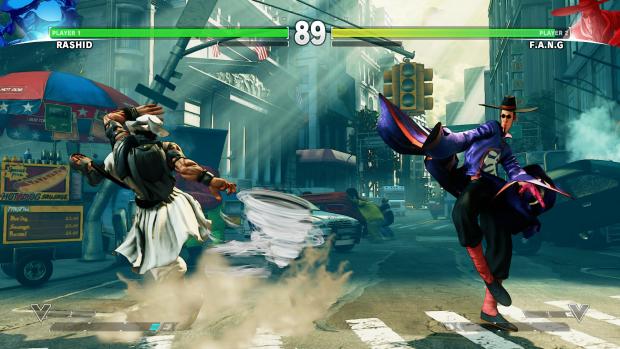 Speaking of bare bones, that is Street Fighter V's current package in a nutshell. The lack of content has been the biggest complaint the past week and even the modes there now are disappointing. Story mode takes about a few minutes per character and basically a prologue to the cinematic story expansion DLC that is expected to be out in June for free. Also, it's just two to three one round fights with full meters as the CPU AI offer little to no challenge at all. Plus the art that was implemented into the stories feel tacked on last minute. Survival mode is where you can unlock more colors for the characters, but also an unbalanced grind. Each difficulty has a certain amount of stages for players to beat with 10 for easy, 30 for normal, 50 for hard and 100 for hell. The problem that the CPU AI don't offer much offer a challenge until later on harder difficulties. Even on normal, the last two fights offer outrageous difficulty spikes to the point you're fighting a skilled online player. The random difficulty spikes make survival make more to pain to play because you never know if the AI will completely shut down your options at any moment on a long run. Other than a training mode that has enough options for high level players to lab it up, that's it for single player content currently for Street Fighter V. Yes, there's no classic arcade game for the game right now, but Capcom are adding trial-like challenges and more modes in future patches. My biggest issue with Street Fighter V is how unstable the online servers are. As I was writing this review, the servers have been down for maintenance for a few hours because they have been up and down the entire first week of it's launch. Matchmaking has been slow at various times throughout the days and with four online betas before it's release, Capcom was ready for the load, but turns out they weren't. You can play the story and survival modes offline, but you won't get rewarded with experience points and fight money to be spent on the shop that will be out in next month's update. Capcom making this basically an always online game when the servers haven't been consistently stable is gonna be Street Fighter V's biggest detriment to all players. 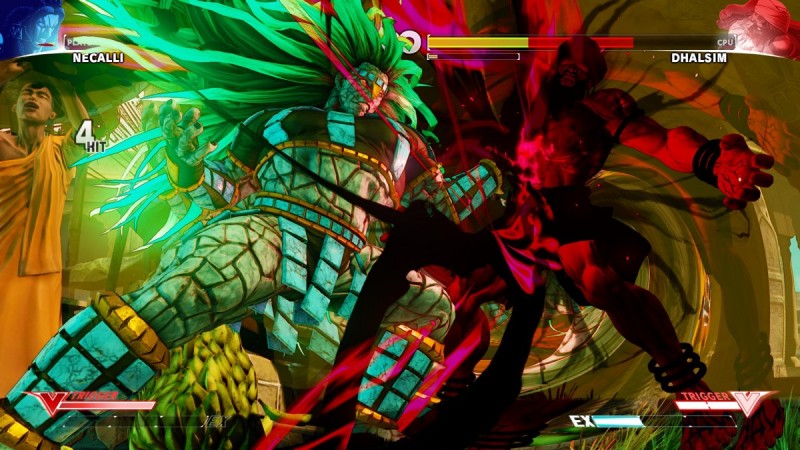 When the servers are working, the netcode for the fights has been great. I only had a few matches were the rollback and lag was pretty bad likely because of a poor connection. Ranked matches use a points and league system where you accumulate enough points and then you get promoted to bronze, silver and then gold leagues. Matchmaking has been fine matching up with similar ranked opponents, but sometimes matches don't get recorded to the servers when they're not working properly. Other than ranked and casual match options, battle lounges are the game's lobbies, but they're only limited to two players (Capcom will be adding more in a future patch). You can invite other players you're following via the Capcom Fighters Network, or CFN, privately to these and play a first to whatever set along with allowing character switches. When you're playing online, you have to pick your character and favorite stage in the battle settings screen. Don't set that up? Well have fun playing as Ryu. The CFN allows players to search up other rivals to follow them, view replays and check the leaderboards. Capcom hasn't had a consistent track record with their fighting games online and Street Fighter V is no different with it's server issues despite great netcode during matches. Graphically, Street Fighter V looks great on both Playstation 4 and PC. The characters are very detailed and the stages themselves have a ton of variety of it. However, only the Chinatown stage has a cool effect of winning rounds against opponents where you knock them into a bus or through a wall with noodles on their head. Some of the characters received new facelifts such as new outfits for Ken and Karin. The framerate also holds up consistently both locally and online. The music is also good with character and stage theme songs along with options for English or Japanese voices. 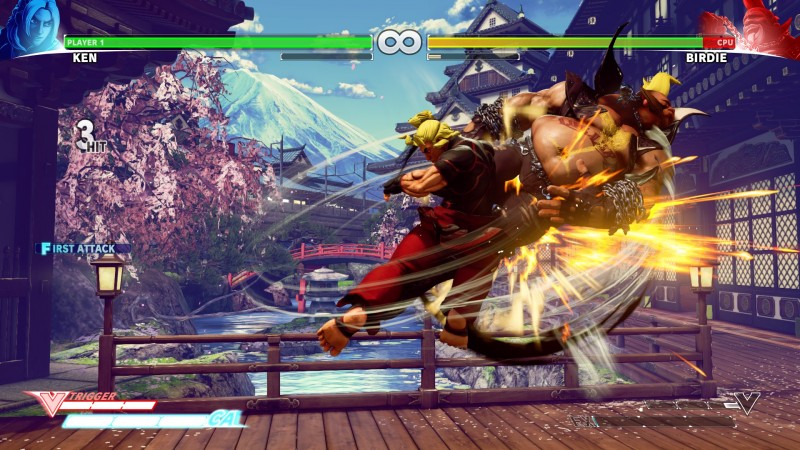 Street Fighter V is another superb entry for the series in terms of gameplay that is currently in an unfinished package. The fighting itself is excellent and the new additions are fun for both types of players. There's a character for everyone that has a preferred playstyle. Unfortunately, the lack of single player content and servers not working inconsistently are the game's biggest flaws so far. Despite the game being the most accessible yet in terms of gameplay, the in-game tutorial doesn't do a job getting newcomers familiar with the new mechanics. The netcode for matches has been performing well when the servers are working. Capcom had to get this game launched earlier than later so the new year of their Pro Tour can begin, but did they ignore the casual crowd with the lack of modes? Yes for now and it will be a more complete package come June. If you're itching to play Street Fighter then SFV is still worth buying now at it's current state. Those still on the fence because of the game's issues? More modes and characters are coming in the next few months if you're willing to wait.
Rating
8.0
Pros