"Running out of excuses."
By: Alexander Wong | TV Reviews | November 10, 2015
With each episode, the excuses are running out for Supergirl. The pilot had to progress so quickly to establish Kara as a hero in her own right. “Stronger Together” had to make Kara petty and stubborn in order to prove she was a hero to herself. In contrast, “Fight or Flight” didn’t really have any of these obligations. All it had to do was show off the fun of watching Team Supergirl at work, making the failure of the episode to do this all the more troubling. [caption id="attachment_76819" align="aligncenter" width="502"] 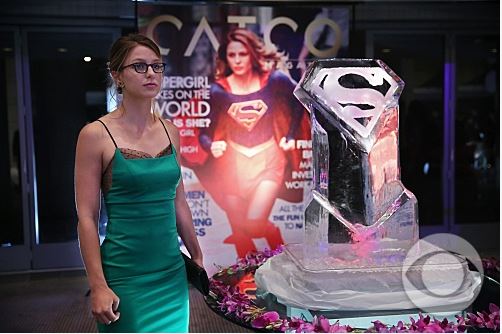 Pictured: Melissa Benoist. Photo: Cliff Lipson/CBS ©2015 CBS Broadcasting, Inc. All Rights Reserved.[/caption] Despite being disappointed by “Stronger Together” not showing the contents of Cat’s interview with Supergirl, I think their actual interaction was even more of a let down. Cat’s first line ending with the sarcastic “Who are you?” didn't bode well for the rest of the interview, and Melissa Benoist wasn't able to bring anything to the conversation that helped define Kara as any more developed than she was before she put on the cape. This makes sense because she's still inexperienced, but I found myself wishing they had saved this moment for later in the season, after Supergirl had done something to truly prove herself as a hero. Her unnecessarily flying around didn't help matters, and the interview’s abrupt end just highlighted how unimportant the scene was to the rest of the episode (aside from letting Cat know that Kara was Superman's cousin). It reminded me a great deal of how The Hobbit: The Desolation of Smaug saved the death of Smaug for The Battle of Five Armies, when all this move did was mess with the film’s pacing. Another problem with the episode was James’ poorly executed territoriality. James interrupting Winn is so awkwardly done that it doesn’t even come across as him being possessive, and the only indication of what he's actually doing is a bizarre look at Winn like he's the one acting weird. First, I still would rather the show focus on making the superhero-ing exciting instead of accelerating its romantic subplot (as it does with everything else). And second, it’s weird how fast and loose the writers are with the way they portray their characters. The moment I saw James walk up to Kara and Winn and ask for a dance, kind of expecting a “yes,” I almost threw up. For a character that started out so positively, it was a pretty gross moment, as he just expected her to be okay with him touching her after he went behind her back. To add insult to injury, the show compounds this issue by adding a little wrinkle to Kara and James’ relationship in the form of Jenna Dewan-Tatum's Lucy Lane. I guess they thought that because they didn't complicate Barry and Patty’s romance on The Flash, they had a free pass to do this on Supergirl. [caption id="attachment_76818" align="aligncenter" width="501"] 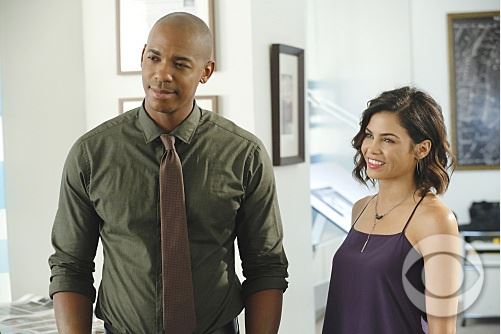 Pictured left to right: Mehcad Brooks and Jenna Dewan-Tatum. Photo: Trae Patton/CBS ©2015 CBS Broadcasting, Inc. All Rights Reserved.[/caption] Maxwell Lord’s more prominent role in this episode is frustrating for two reasons. As I mentioned earlier, I believe the show is going through its story elements a little too quickly and predictably. But Maxwell also doesn’t seem to be interesting as an ally, villain, or presence on the show. He’s characterized as somewhat capricious and childish, and I just can’t see him adding anything to Supergirl except acting as a plot device to explain or build something other characters can't. The show obviously hasn’t done much to position him as a bad guy, but the fact that a storied character like Maxwell Lord doesn’t show much promise is a very worrying sign. However, the construction of Reactron as a villain is the source of the episode’s biggest problems. While I enjoyed the fact that we weren’t subjected to another bout with General Astra and Co., Reactron was barely serviceable as a villain, never coming close to the threat that he was supposed to pose to Supergirl (and Superman, for that matter). Kara is able to disable him in their initial fight without coming close to being in danger or going all out, yet everyone’s dialogue makes it seem like he’s the be all and end all of villains. Even Superman was never able to get the better of him, apparently, despite the fact that a marginally better Supergirl would have done the job just fine. If she had flown after him when he decided to bail the first time, she actually would have had him, but the show’s decision to allow for multiple encounters kind of prevents Kara from being the hero the show pretends she is by episode's end. The way the episode built up Reactron, and Supergirl going out to meet him, was reminiscent of the Batman Beyond episode, “Babel.” In it, Shriek prevents the population of Neo-Gotham from communicating with each other correctly and offers to return everything to normal in exchange for Batman’s life. In another example of Terry being worthy of the mantle of the Bat, he goes to face Shriek, fully prepared to die. The difference between this story and “Fight or Flight” is the fact that “Babel” takes place in Batman Beyond's second season, allowing for the gravitas of a more experienced hero going to face their doom. But not only that, it’s also not Batman’s first encounter with Shriek, adding more weight to him calling Batman out. Supergirl cheats by giving Reactron history with Superman instead of Kara, but it’s so obviously trying to make the conflict of the episode more important than it is that it ends up making the entire story arc boring to watch unfold. Supergirl could stand to learn a lot from Batman Beyond, especially because the new Batman’s relationship with his senior counterpart is such a highlight of that show. [caption id="attachment_76855" align="aligncenter" width="501"] 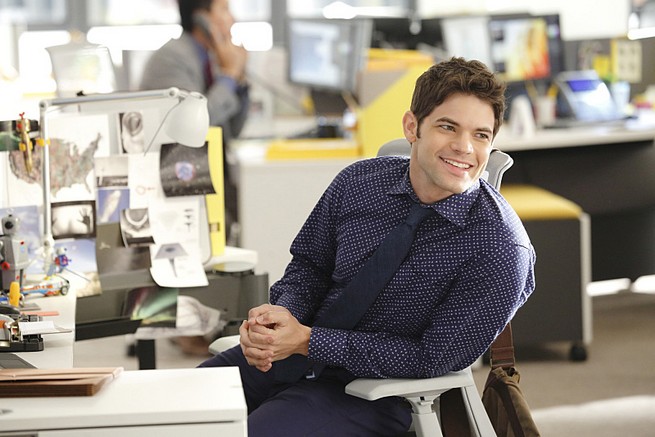 Pictured: Jeremy Jordan. Photo: Trae Patton/CBS ©2015 CBS Broadcasting, Inc. All Rights Reserved.[/caption] I keep trying to avoid talking about fight scenes on TV, as they’re not key to enjoyment of a series if everything around them is well-crafted or fun, but I continue to be impressed by the consistent mistakes superhero shows make in the single-most aspect they’re often reduced to. When Alex and Hank got into contact with Kara and said that she had to remove the Demon Core from Reactron's chest piece, at first I thought, 'duh,' then I worried that Supergirl was about to go down the route of making the hero do something unnecessary to defeat the bad guy. But then lead was mentioned and I thought they might have learned their lesson after so many episodes of The Flash. However, when Kara encases the core in lead to prevent it from going into meltdown, all she does is grab it with a makeshift lead glove. Like, you can see most of the core glowing through her fingers... On top of that, there’s still some kind of delay or editing issue that causes some discordance in the action, which is sometimes so blatantly obvious that I'm surprised that someone gave the episode the okay. But I’ve been putting it off for too long, so let’s talk about Superman’s appearance. The pilot episode of Supergirl’s beating around the bush regarding the use of “Superman” made it seem like the show was going to distance itself as much as possible from the Man of Steel. But the episode's overbearing insistence on saying this is Supergirl’s story made me worry that the writers were going to try doing something clever to subvert this. Emphasis on “try.” Superman showing up to rescue Kara was surprising, but it also flew right in the face of everything the episode was trying to say. I already mentioned the issue of Reactron not being a sinister or strong enough villain to warrant the hype he gets, but the episode has been making a point of saying that this is Kara’s story. Her not being the one that calls for help doesn’t change the fact that Superman arriving on the scene immediately threw the episode’s lesson out the window, a problem compounded by the fact that he is the least substantial enemy she has dealt with so far. I’m sure some will say that Kara being able to grow in spite of Superman’s presence is a testament to her character, but I couldn’t help but see this as yet another misstep in the early days of Supergirl. And even then, last episode was all about how it’s an honor to receive help from someone else on Krypton. At this point, I feel like I have a pretty good handle on what the series has to offer, which consistently tends toward the negative or “just okay” parts of the scale. “Stronger Together” gave us an indication of the direction the season will take, but “Fight or Flight” showed us the quality of a standard, run of the mill episode of the show. For viewers hoping for something more, unfortunately, that quality is quite low. [caption id="attachment_76849" align="aligncenter" width="501"] 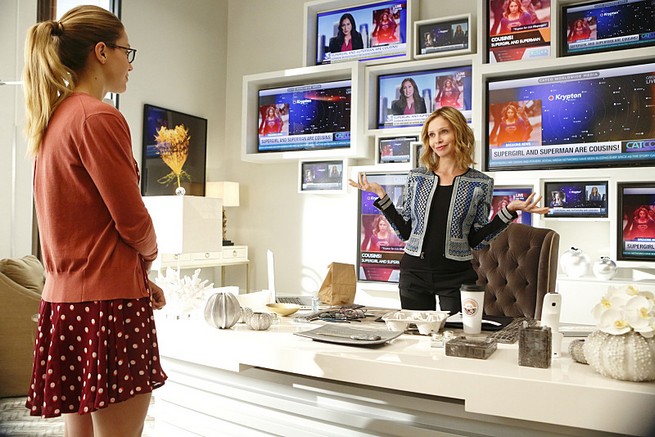