Supergirl – The Adventures of Supergirl Review

"The Man of Steel and a Luthor too "
By: Anthony Punt | TV Reviews | October 11, 2016
The Season 2 premiere of Supergirl was billed as a team-up between Supergirl and her cousin Superman, and to be sure “The Adventures of Supergirl” does not skimp on the Man of Steel. His presence makes for a highly entertaining and lighthearted Season 2 premiere that also introduces a Luthor to the Supergirl cast and furthers the intrigue surrounding Project Cadmus that was introduced late last season. First and foremost, let’s address the metaphorical elephant in the room (or online review, as the case may be): how does the Superman in the Supergirl universe measure up to other depictions of the character on the large and small screen? The answer: quite favorably, actually. Tyler Hoechlin, the actor cast as the Last Son of Krypton, is effortlessly charming in the role and—I mean this as a sincere compliment—comes closest to approximating Christopher Reeve’s iconic turn as the character. As Clark Kent, Hoechlin pulls off the “mild-mannered reporter” bit in a fresh way; his Clark may be awkward (or at least pretend to be) but he’s charming enough to melt even the icy exterior of Cat Grant. His Superman is equally likable—capable of the gravitas that would bring hardened DEO agents to attention, but with the light touch to wink at some people he just saved as he flies away. Scenes like that can’t help but bring a smile to your face and make this version of Superman far more appealing than the dour interpretation of the character seen on the big screen. 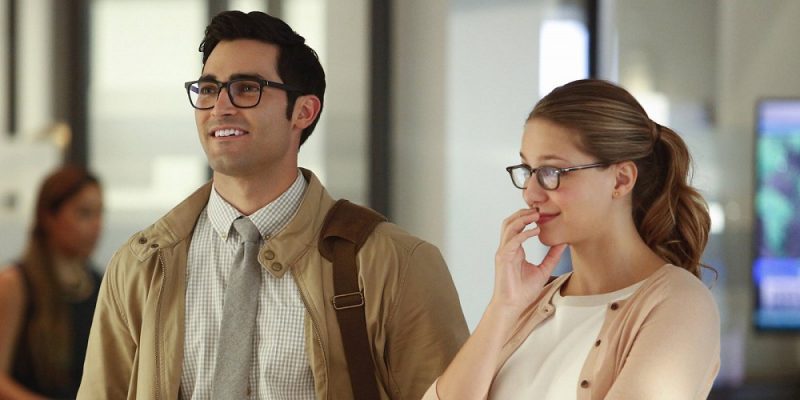 Hoechlin’s Superman is certainly a highlight of “The Adventures of Supergirl,” but writers Andrew Kreisberg, Jessica Queller, and Greg Berlanti don’t stop there. The Season 2 premiere also serves as our first introduction to Lena Luthor, the (adopted) sister of Lex. While Lena may seem like the sort of contrived character that TV showrunners would create out of whole cloth, her origins come straight from the pages of DC Comics. With that said, interpretations of the character have varied wildly over the years. This version of Lena Luthor (Katie McGrath) is a sharp, glamorous businesswoman looking to distance herself from her brother’s bad name. Clark has a hard time trusting her at first—as he puts it, he’s learned from experience never to trust a Luthor—but by episode’s end, she has earned his trust. If I had to guess, the Supergirl showrunners intend to have Lena fill the amoral anti-role role filled in Season 1 by Max Lord. It would be an upset if Lena suddenly becomes Supergirl’s Pal, but the showrunners have thrown curve balls at us before so it’s best to be prepared for anything. Aside from the introductions of Superman and Lena Luthor, the plot itself is relatively threadbare. But that’s for the best as it allows the episode to breathe and allow for Superman to interact with the rest of the cast. The antagonist is an international assassin named John Corben hired by Lex Luthor to kill his sister; the name will ring a bell with DC Comics fans who know it to be the secret identity of Metallo. In fact, the last scene of the episode hints that the Supergirl version of Corben will also become a cyborg of sorts (although it remains to be seen about the Kryptonite heart). Of arguably greater importance for later episodes in the series is the involvement of Project Cadmus. Presumably it’ll be the “supervillain factory” for Season 2 in much the same way that Fort Rozz was for Season 1. Given the fact that Jeremiah Danvers is apparently at Project Cadmus as well, it’s only a matter of time before we see a confrontation between he and his daughters: the one of his flesh and blood as well as the Kryptonian one. 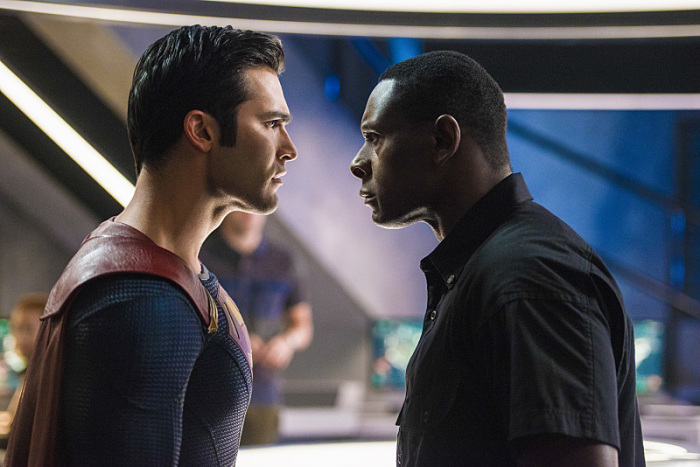