"What does it mean to be human? Do we have a purpose? What is the nature of reality? The Talos Principle asks all this and more!"
By: Maxx Golbraykh | PC Reviews - PS4 Features - Xbox One Reviews | October 7, 2016

Growing up in the late 90's, you probably remember a time before the two Matrix sequels muddied the waters of the franchise. The original Matrix film struck an entertaining chord while exploring age old philosophical questions. Plato's allegory of the cave and other facet's of the Matrix narrative were not new to me when I first saw it, yet they are explored in presentation that refreshes our view on them. Like many others, I left the theater in genuine wonder whether the world around us could be a vast illusion. 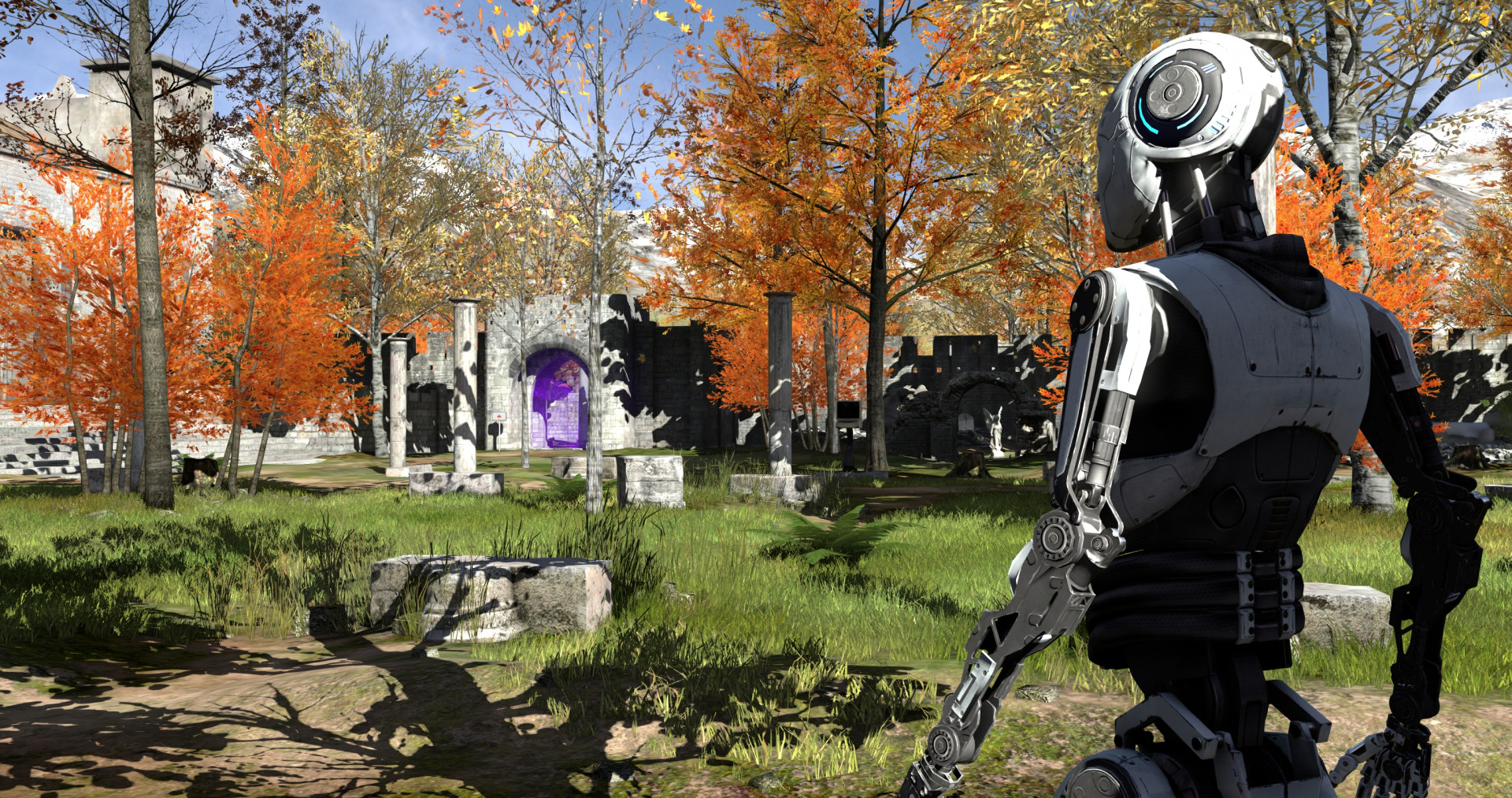 Perhaps in an even more direct way, that feeling was once again reignited in me when playing The Talos Principle. This puzzle game of switches, buttons, keys, boxes, lasers, jammers and other solution fodder ends up being so much more than the sum of its parts. Not far into the game, questions about who, what and where you are rise quickly to the surface. The world around you, clearly virtual. Your in-game hands, obviously robotic. But putting these two facts together leads to more questions than answers. Are you a robot if your body isn't physical? Are you you, or a character in a video game inside a virtual world? Is there a strong difference?

The Garden of Eden

From the very start, the Garden of Eden parallels are fairly obvious. A booming voice echoes down from the heavens. "You are my child." it claims. Any part of the garden is there for you to explore and solve. "But stay away from the tower", you are warned. "The tower will bring only death". This booming voice belongs to Elohim, aka God. The garden is largely scenic and vibrant, with many parts to explore connected by central hubs. Each part contains several quick puzzles that reward you with Tetris-like pieces used to open new areas of the garden as well as the imposing tower. 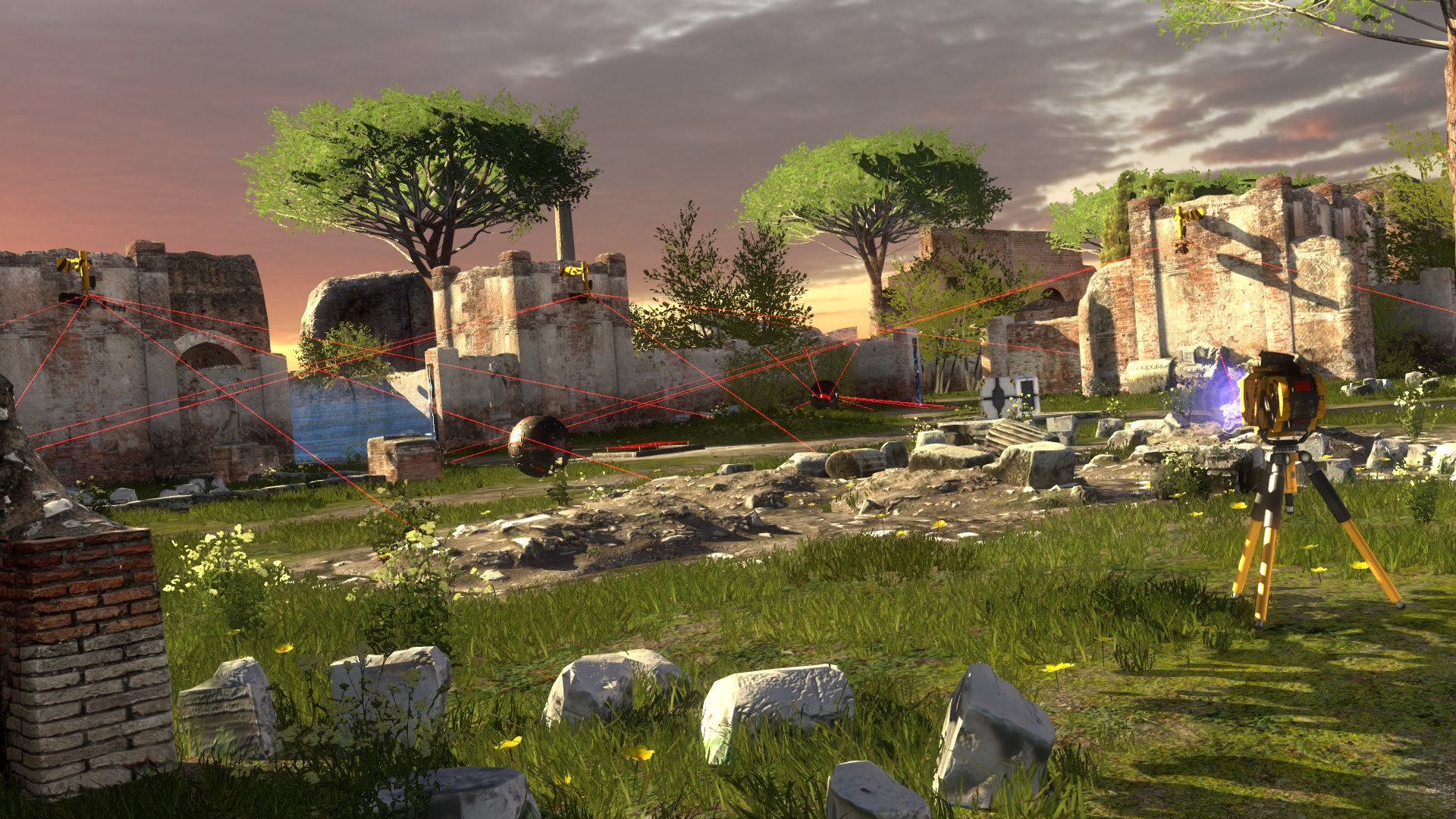 Throughout your exploration you might find notes from other entities scribed on the walls of the garden. Some are hints, some are musings, others still are warnings or doubts. Each note is signed by different entities who have presumably gone through something similar to what you are going through now. Sheep are the most common of these, typically echoing your own questions about the world. There are also ones from The Shepard, which tend to be more of a guiding nature. These notes form their own kind of questionable narrative about the nature of the world you are in. 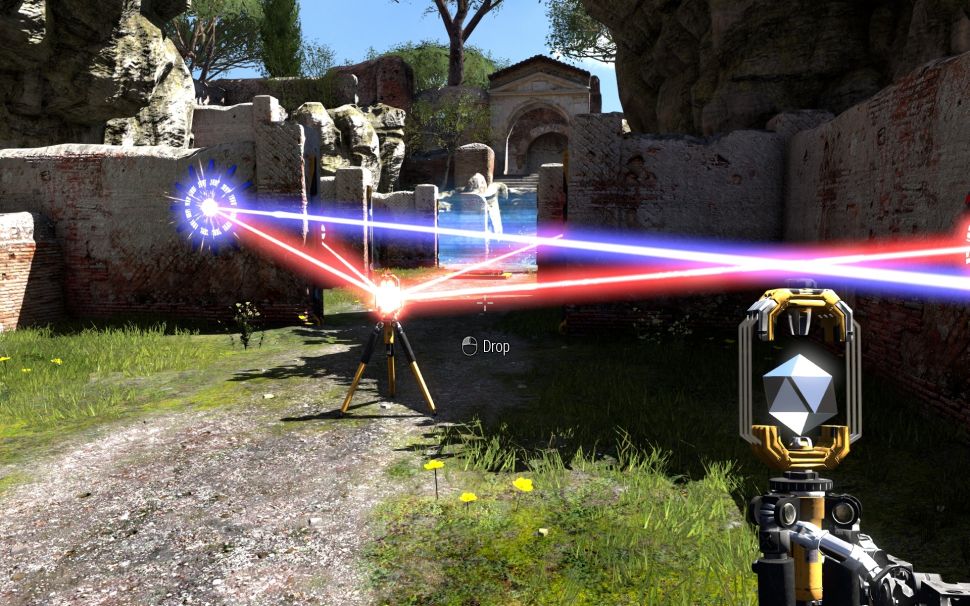 We Must Go Deeper

Aside from the puzzles, the God parable, the questions about who or what you are, there is also a world external. Buried along side the wealth of philosophical and religious texts, you find records of the last days of a dying world. Our world. These dev logs, emails and audio recordings paint a bleak picture of the human race taking its final breaths. Reaching out in time while trying to make sense of what it means to be human. 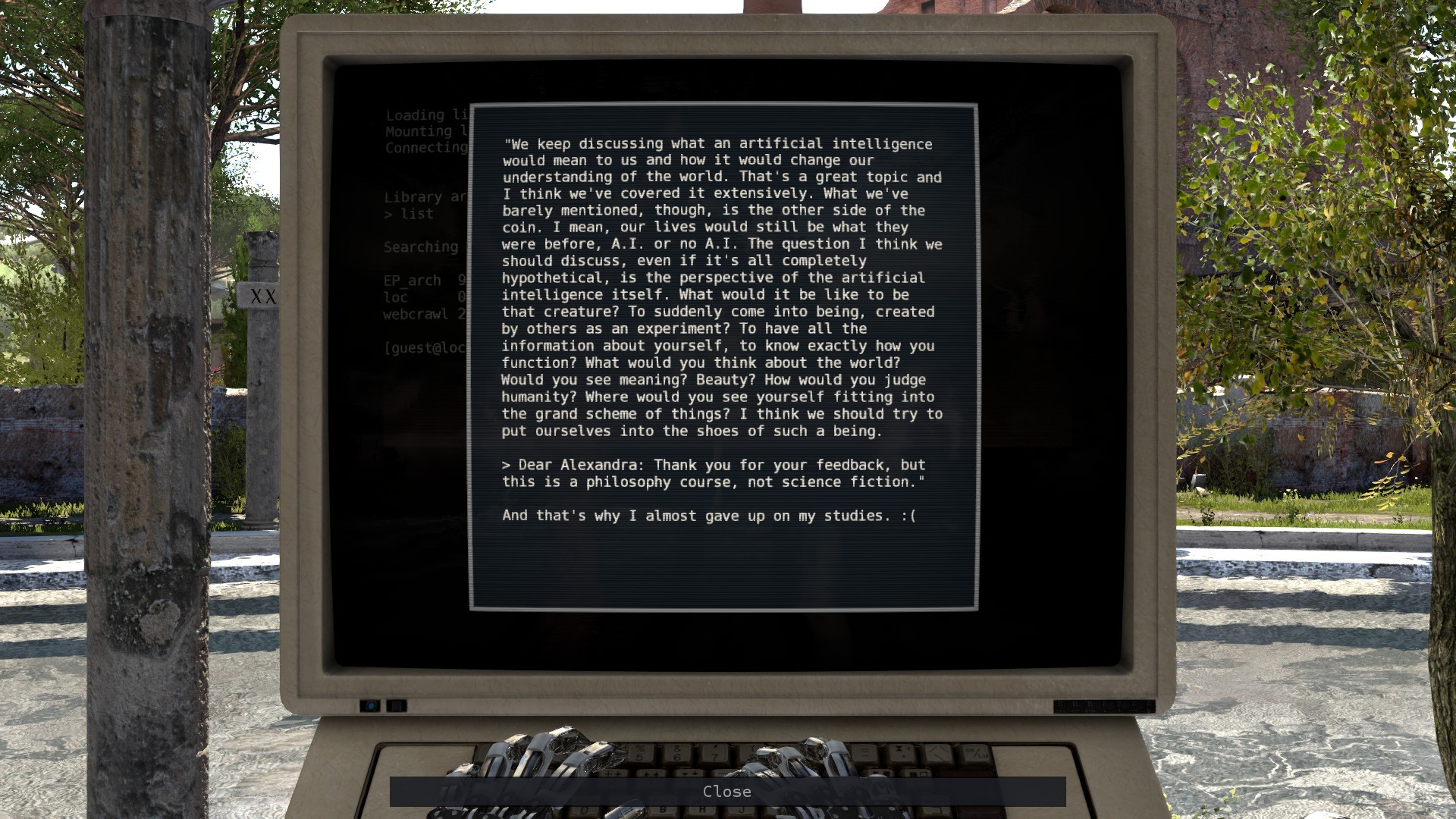 As a developer, I found these aspects of the game exceptionally relatable. A small team of devs, desperately trying to finish a project before time runs out. Often falling behind, feeling helpless, hoping and working through the each new challenge of the project as it arises. It feels like the passion and dedication captured in these words came from the developers of The Talos Principle themselves. The struggle and hope that come from working on a project so ambitious and unique. Perhaps like the characters they represent in game, they wanted The Talos Principle project to outlive them as well. 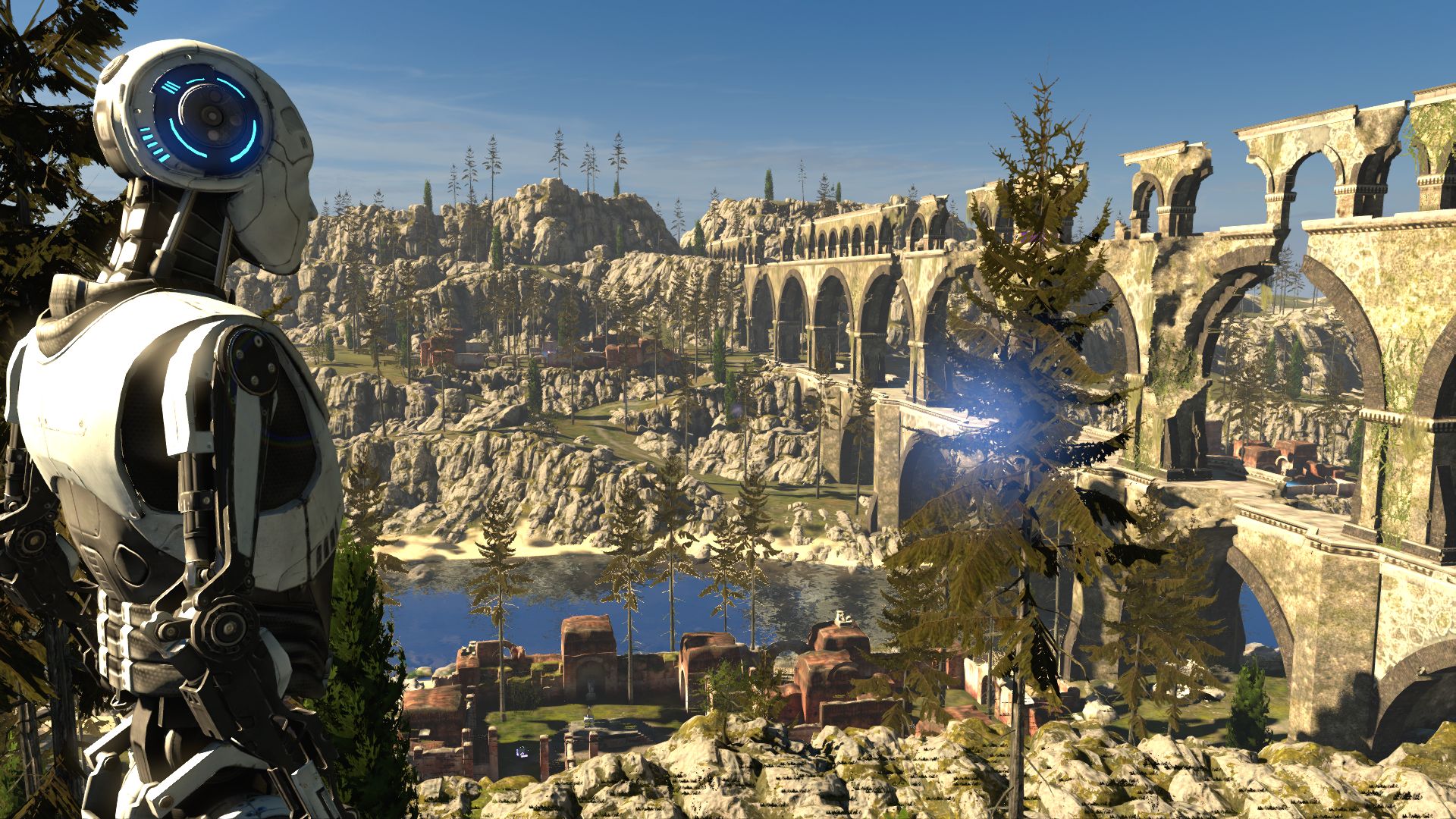 Prove You Are Human

Early on in the game you "meet" another NPC in the game referred to as the Milton Library Assistant (MLA). The MLA is the most profoundly different aspect of The Talos Principle game. Your interactions with the MLA via terminals found throughout the garden are quite frequent and thought provoking. From the start it questions you about who you are and what it is you think you are doing. It asks you to prove you are human, and generally interacts with you in ways more convincing than I've encountered in other games. 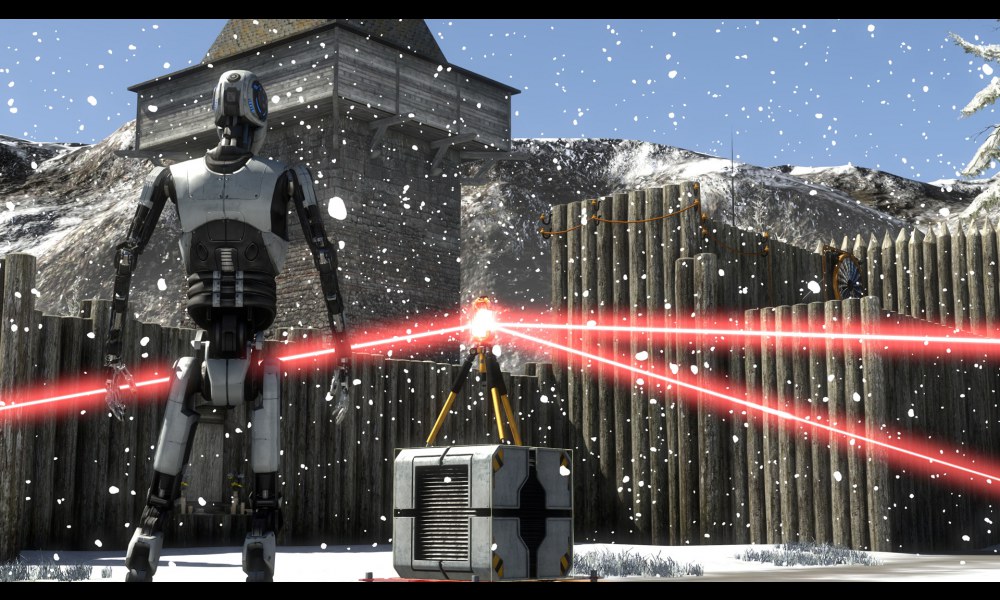 Interaction with Milton is where the philosophy of The Talos Principle really hits the hardest. Milton will press you on your views of reality, in and outside of the game's world. He will remember what what you've talked about in the past and call out your contradictions. You may think that you have the world more or less figured out, but it's not unlikely that Milton will single-handedly show you that you do not. For a simple AI built into a virtual world built into a game, Milton is better at calling me on my bullshit than most people in my real life.

My first impression of The Talos Principle is that it looked drab, regular and a little boring. Spoiled by flashy and ultra stylish puzzle games like Portal, the visuals in The Talos Principle can come off as very ordinary in contrast. However, this effect is most likely intentional and the game does feature some beautiful vistas later on. For the puzzle fanatics, this game will likely feel rewarding as the puzzle progression is not strictly linear in difficulty. While the base puzzles are quick and satisfying, they come together to form more obscure and complex puzzles. The image below is not one puzzle, but three smaller puzzles coming together to create a satisfying solution to something grander. 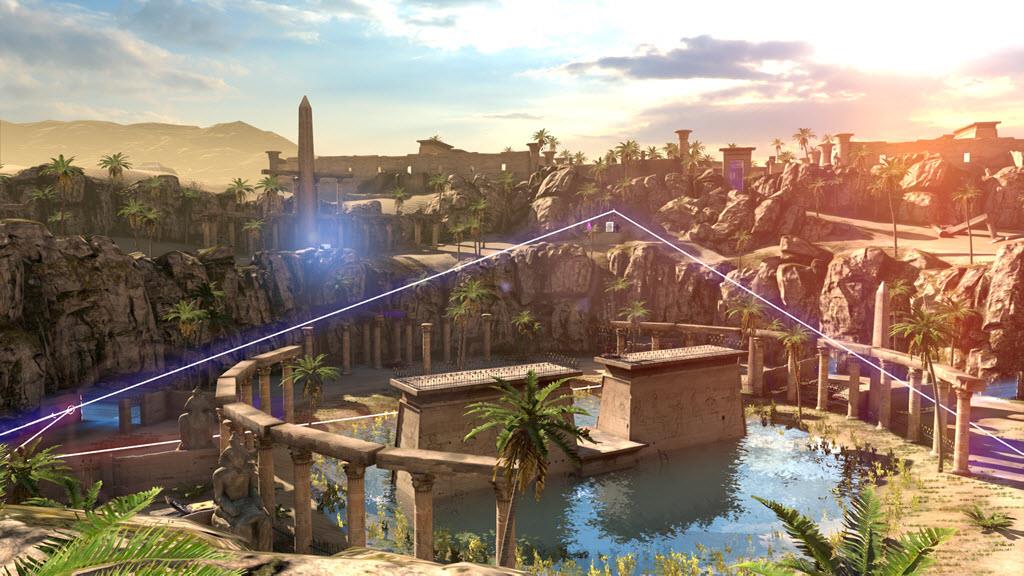 Besides the traditional puzzles, the interactions with Milton form a sort of philosophical puzzle of their own. The narrative and puzzle elements mix seamlessly and are well paced with how most people will approach the game. Multiple endings of varying difficulty are available and each is pretty satisfying in its own way. This game raises some very profound questions about reality, understanding art and our own nature.  I look forward to coming back to it at a later time to interact with Milton some more and unlock more of The Talos Principle's many secrets and treasures.
Rating
9.7
Pros