By: Jeffrey Dy | PS3 Reviews | September 18, 2012
Namco Bandai’s first Tekken Tag Tournament game was a culmination of the first three games in the the franchise in terms of gameplay and fan service with the character roster. They are at it again with Tekken Tag Tournament 2 in the same role. While the console versions of Tekken 6 were disappointing from a feature set perspective with the bad Scenario Campaign story mode, Namco stepped it up again and it is arguably the most feature-heavy fighter out this console generation. Tekken Tag 2 is a fun 3D fighting game package that both low and high level players will enjoy for months and even years until the next game comes out.

An enormous roster of over 50 fighters from Tekken’s past and present awaits players in Tag 2. Not only all of the characters from Tekken 6 are here, but also characters that were last seen in Tekken 2 and 3 are back to appease fans. In other words, nearly all fighters throughout the franchise are playable here. Many characters that were seen in earlier Tekken games are console exclusive or downloadable; Forest Law, Prototype Jack, Tiger Jackson, and Alex are the console exclusive characters.

On the downloadable front, Ancient Ogre, Angel, Michelle Chang, and Kunimtsu are already available if you pre-ordered the game, but they will be eventually be out for everyone else at a later time. More characters were leaked and then made official not long ago, which will come out soon too. More than 50 fighters might be too much for players to choose from and learn for matchup purposes, but there should be a favorite for anyone to pick whether you’re new or a veteran to the franchise. 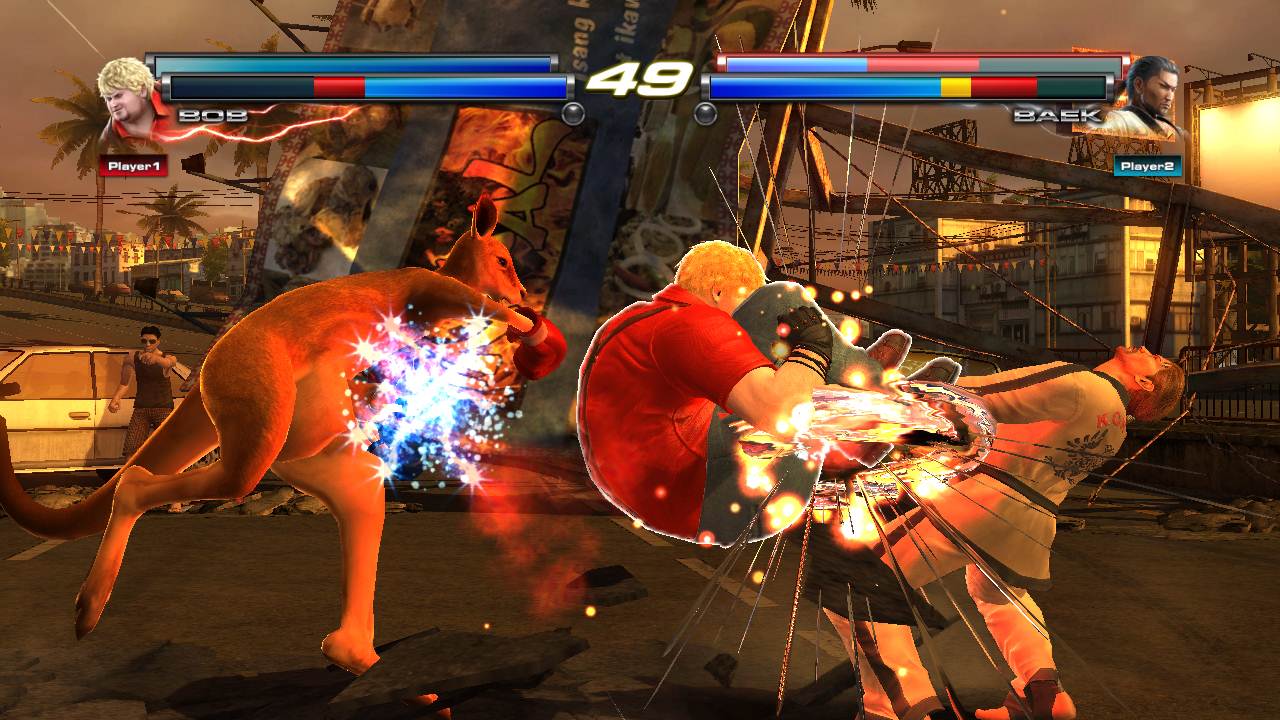 Tekken Tag Tournament 2 is arguably the most feature-heavy fighting game to come out this console generation due to the number of modes and features to play. This is also Namco’s best console effort in that department since Tekken 5, so they are no stranger to keeping players busy in their fighting games both offline and online. Besides the standard franchise standout modes of arcade battle, versus, team battle, time attack, survival, and practice, more modes increases the game’s offline replay value a ton.

Ghost battle is back from Tekken 6 where you face endless opponents until you feel like stopping, but you can earn money and more to buy customized parts for characters. This is also another way to unlock endings for the cast if you don’t feel like beating arcade mode with the whole roster. New to Tekken Tag 2 is Fight Lab mode, which serves as a tutorial mode with some sort of storyline for newcomers to started. The story with Fight Lab is about Violet, who first appeared in Tekken 4, developing a new Combot model, to fight in the tournament. While players learn the basics and tag mechanics of the game, hilarious twists and gags towards other fighting games make this mode worth it for veterans of the franchise too. You don’t actually learn advanced tactics in Fight Lab, but the basics and mechanics that were taught are good enough to get started against the competition.

The core gameplay concepts from Tekken 6 are a major factor in Tekken Tag 2. The bound combo system from that game remains the same, but there are the additions to the system now that there is a partner involved. While solo bound combos are similar to Tekken 6, the tag assault system adds in more potential with Tekken’s combo system. After initiating a bound move, you hold the tag button for your partner to perform some moves to hopefully keep the combo going while your present character finishes it off.

With the enormous roster available, the imagination is endless how crazy these tag combos can be adding more fun to the gameplay. The same rules from the first tag game apply here, if one character gets knocked out, the round is over, so it is not ideal to keep one character fighting for a long time. Despite being a tag game, there is an option to just play as one fighter rather than two, which was seen in the Unlimited arcade version of the game. While you don’t have access to crazy tag combos, going out solo gets you more damage and regenerating red health. 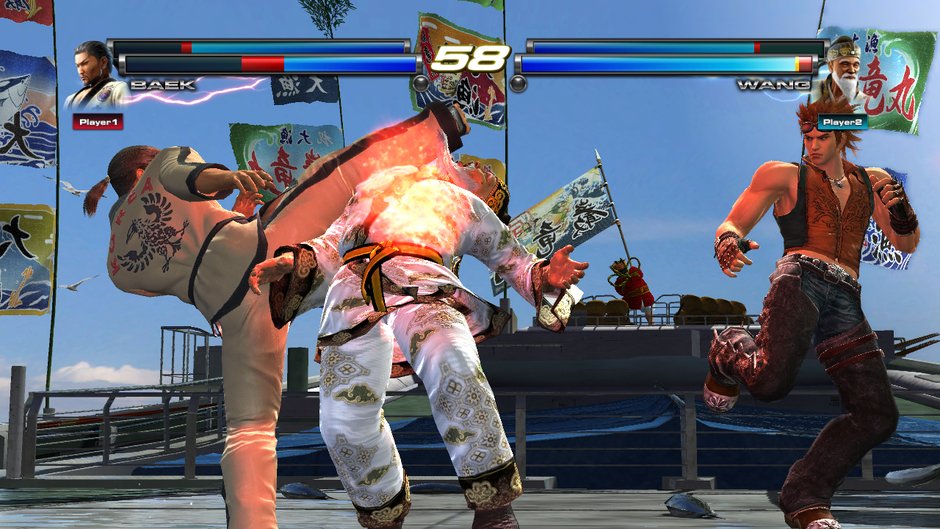 The rage system from Tekken 6 also returns in Tekken Tag 2, but works in a different way. Instead of being activated when your character is close to death, netsu is activated when your present character loses about half their health and your partner’s health meter starts blinking. Once you tag your partner in, that character gets rage for a limited time and can inflict major damage to opponents. Another way netsu gets used is tag crashing, which your partner dives into the action while your current character is laying down. This is the safer way to tag in, but it costs rage and you can’t heal red health. This system as a whole adds a lot of strategy and mind games during fights as one good/bad decision with netsu or rage can usually decide rounds. Even though Tekken Tag Tournament 2 plays similar to Tekken 6, the new tag systems add a lot into the game that both satisfies franchise fans and tournament-level players.

The developers knew that they had to step things up on the online aspects after Tekken 6’s disappointing netcode. Soul Calibur V’s online was a superb start for Namco and it gets better in Tekken Tag Tournament 2. The netcode comparisons between Tekken 6 and this are night and day as fights have little to no lag at all. Nearly all of the online matches I played so far were at four or five bars, which is pretty impressive and I’m able to execute off my combos perfectly. Besides the much improved netcode, Tag 2’s modes are the norm from recent fighting games with ranked/player matches, lobbies, replays, spectator mode, and more. What I didn’t mention earlier is the pair play mode, which is similar to Street Fighter X Tekken as two players play as one character each.

This is also available to play online when you team up with another player. Another neat touch with the online mode is that you practice your moves and combos while searching for matches to get warmed up. Lastly yet optional, there is the World Tekken Federation, an official website that tracks your win/loss record, specific stats from all your matches, and a lot more. You do have to manually sign up on the site and link your PSN or Xbox Live account for this to work, but it does a great job of tracking what you do well and what you have to work on to get better. Out of all the recent fighting games out in the past couple of years, Namco’s efforts with the online play for Tekken Tag Tournament 2 is the best I played and seen out of the whole genre.


While at first glance Tekken Tag 2 looks a lot like Tekken 6, the new game does look better in-comparison, especially in the little details. Characters at certain stages get dirty and it shows on their models since they're covered in dirt or purple goo. Customized outfits and items are back as players can mess around the roster’s looks with wacky outfits and items to be used both offline and online. The motion blur is not as overblown as it was in Tekken 6.

Most of the stages in Tag 2 are brand new with breakable walls, balconies, and floors to spice things up, but there are some stages that are throwbacks to past Tekken games. Jin’s stage from Tekken 3, the arena from Tekken 4, and the Moonlit Wilderness from Tekken 5 return in this new iteration with different twists. The Tekken franchise is also known for having amazing soundtracks and Tag 2 is no exception. This is arguably the best soundtrack yet for the franchise with great tunes that span a variety of genres. Even the throwback stages get remixed versions as well. If the soundtrack is not your thing despite how superb it is, Tekken Tunes allows into customize songs into each stage. This is a great implementation of custom soundtracks that are usually pushed off the side in most games, so it is nice to see a feature like this in-game.

Tekken Tag Tournament 2 is another superb entry for Namco’s long lasting franchise. It is the most feature-heavy fighting game out this console generation with tons of modes and replay value. While the core gameplay is similar to Tekken 6, the new tag gameplay systems definitely spice things up especially in the mind games and strategy department. The unlimited imagination of the tag combos and combinations add a lot of fun to the gameplay as well. The roster of over 50 characters is a who’s who of the franchise and more are on the way as free downloadable content in the future. Another reason not to judge Tag 2 as another Tekken 6 expansion is the graphics with notable improvements. The soundtrack is also another top notch effort from the folks of Namco Bandai. With stiff competition from a ton of fighting games out in 2012, Tekken Tag Tournament 2’s is the best 3D fighting game package you can get this year so far.