On what was by far the lowest-grossing weekend of the year so far, action ensemble The Expendables 2 carried on the tradition of its predecessor and spent a second week at number one, while all newcomers debuted rather miserably.

Sylvester Stallone lead his team of rag-tag mercenaries to another victory at the box office as action sequel The Expendables 2 fell by a little over half to $13.5 million and has now collected $52.3 million domestically. This is down from the $65.4 million the original grossed through the same point. 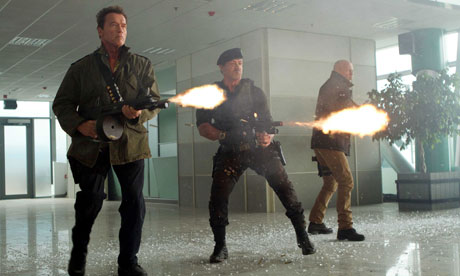 The next five slots were occupied by holdovers (many in their third weeks or more) showing that audiences were happier to catch up on some titles they may have missed over the summer, rather than dumping their dollars into lame-looking newcomers.

Top among new releases was the Joseph Gordon-Levitt-led Premium Rush, which debuted in seventh with a weak $6.3 million. Even though the Inception and The Dark Knight Rises star has seen his popularity skyrocket recently, a bike messenger actioner was not the best sell for this untested leading man.

A hit among anti-Obama Republicans, documentary 2016 Obama’s broke into the top 10 with an excellent $6.2 million and has thus far stolen away $9.1 million since its limited release debut. This is quite an impressive gross for a doc and should wind up as one of the top grossing of its format when its run concludes.

Just breaking the top 10, Hit & Run with Dax Sheppard and Bradley Cooper roped in $4.7 million and $5.8 million since it debuted on Wednesday. It’s a pretty lowly gross, but considering the action-comedy only cost $2 million to produce, it’s far from a terrible result.

After being dumped in just a little over 800 theaters by Warner Bros., would-be scary movie The Apparition could only manage 12th place and an opening weekend of $2.9 million. Toxic word of mouth should mean a quick trip to the rental market where there it will hope to recoup its budget.

Next weekend the box office doesn’t look to be getting any hotter with the addition of three more films. As was the case over the last two weeks, a film will debut on Wednesday, this time with gangster flick Lawless, which will shoot it out in 2,300 locations. Then on Friday, The Possession occupies 2,700 theaters. Kid-flick Oogieloves In The BIG Balloon Adventure lands in 2,000 locations.