"The series is back with diminishing returns"
By: Jean Henegan | TV Reviews | June 4, 2019

I was, let’s say, less than pleased with The Handmaid’s Tale season two finale. I railed against the decision to have June come so close to escape a grand total of three times over the course of the season only to decide (after many people in precarious situations risked their lives to help her) to return to Gilead for . . . reasons. We learn almost immediately that she returned ostensibly to get Hannah, her young daughter, out of Gilead so they can escape together. Which, as we all realized last season, is all well and good, but it’s not like escape attempts grow on trees.

June is quickly captured (shocker, and since it happens within the first five minutes of the season, not really a spoiler in my book – we all knew this was going to happen), and then she’s told by Rita and Nick just how spoiled and selfish her actions are (perhaps the first time I’ve ever agreed with Nick), and that there won’t be a next time for her to get out. She’s blown it. But June doesn’t seem to care – at least that’s what the breezy look on Elisabeth Moss’s face says (and, while I’m going to express a lot of disappointment in June’s arc – so far – in season three, let it be said that Moss continues to hit it out of the park in the acting department – no matter what they throw at her, she tries to make it work, often succeeding in ways a lesser actress never could). And if June doesn’t seem to care that she blew it (and put strangers who just wanted to help her in danger), why should we? Or, should we interpret this as June changing for the worse? 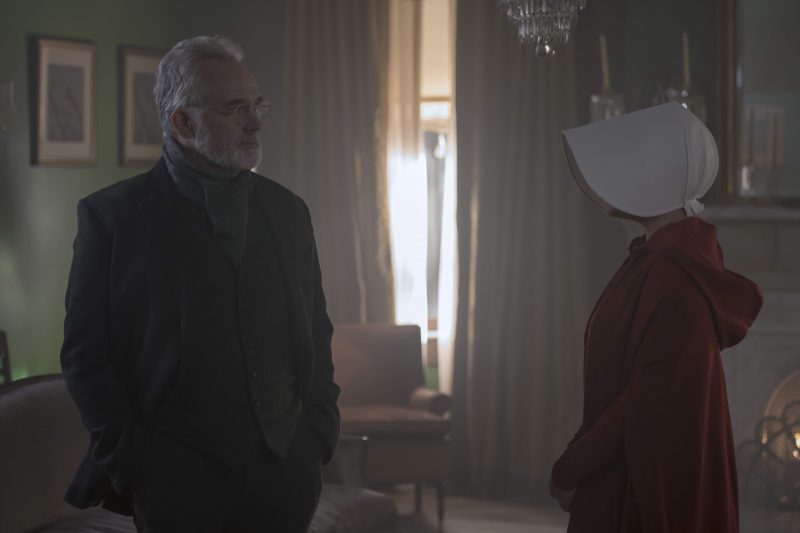 Don’t worry – June’s still the hero. That much is made clear over the course of the six episodes of season three available for critics. She’s the one we should be rooting for, despite her recklessness. In fact, we should cheer her as the symbol of the coming revolution (because if one thing is clear in season three, it’s that the show is now building toward a revolution). We hear repeatedly about an uprising in Chicago (but never see anything relating to it, much to my great disappointment – although I suspect we’ll get some elements of it, as Gilead troops, and a main character, are headed there at the end of episode six), where the enslaved seem to be fighting back against those who hold them captive (Chicago is part of Gilead, per the map shown last season). June manages to infiltrate the Martha underground railroad rescue chain, helping try to save Marthas and attempt to get them out of Gilead (again, another plot point that could get additional time, but doesn’t – I would love to spend more time exploring how this system works, but alas, it doesn’t seem to interest the writers all that much as it isn’t responsible for moving named characters out). June is turning into the white savior trope (as many of those around her are women of color), and the show wants us to acknowledge her for how wonderful she is, while failing to investigate or even challenge how much she risks with her inability to think beyond her own needs first.

But the most glaring issue of season three of The Handmaid’s Tale is its stilted pacing: The show is content to let the story stagnate for episodes at a time, refusing to start digging below the surface of these characters, intentionally. And it isn’t limited to June’s seemingly charmed continued existence in Gilead (she gets away with the escape attempt practically scot-free, especially when compared to some of the horrific punishments in past seasons). Now that the writers have discovered just how talented Yvonne Strahovski is at portraying anguish alongside cold, calculating poise, they lean into it with relish, allowing Strahovski a chance to show off her formidable acting ability, while refusing to explain why Serena is vacillating between polar opposite mindsets from episode to episode.* Aunt Lydia appears to be suffering some lingering issues as a result of Emily’s attack in season two, but six episodes in, we don’t get much understanding as to what is going on with her (and, while there are an additional seven episodes to go, backloading the season with plot is never a smart narrative decision). Bradley Whitford’s complicated Commander Joseph Lawrence returns as a series regular in season three, and while the small glimpses we are given into his personal worldview are incredibly enticing (Whitford is great), I really wish the show was willing to show its cards here. We want to know more about everyone on this show. Six episodes tiptoeing around character development and slowly moving plots isn’t fun to watch. It’s plain boring.

*I suspect this is because the show wants to throw in an 11th hour “twist,” but, as with so much in the first six episodes, I’d much rather see the plot play out in front of the camera. Perhaps this is some Game of Thrones PTSD talking, but I don't want to see another series speed through story when they could have taken their time with it. 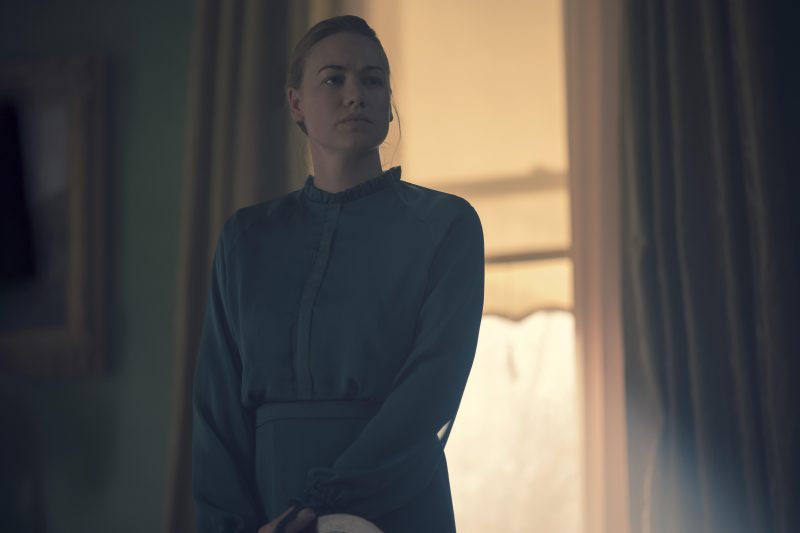 The only truly successful storyline so far is that of Emily (Alexis Bledel, absolutely crushing it once again), who gets the slow-burn, PTSD arc Moira should have gotten back in season two*. Each moment Bledel is on screen is a gift, as we watch her try to reclaim the life that was taken from her. Clea DuVall is back as Emily’s wife, Sylvia, and the story gives you hope that it might be possible for someone to get a happy ending on this damn show. I just hope the season continues to do the work with this story – I want to continue to watch Emily grow, and have setbacks. Hell, I would just like a chance to spend some more time in Toronto, seeing exactly how Canada deals with the minutia of existing so close to Gilead.

*Remember when the show suddenly decided to give her a fiancée in a flashback last season, despite never once mentioning her before? Well, the mysterious fiancée is once again missing from the flashbacks with Moira, June, and Luke in season three. Which is hardly a shock. In addition, Moira seems to be over her temporary PTSD now, as well. Boy, this show has not done right by Samira Wiley. 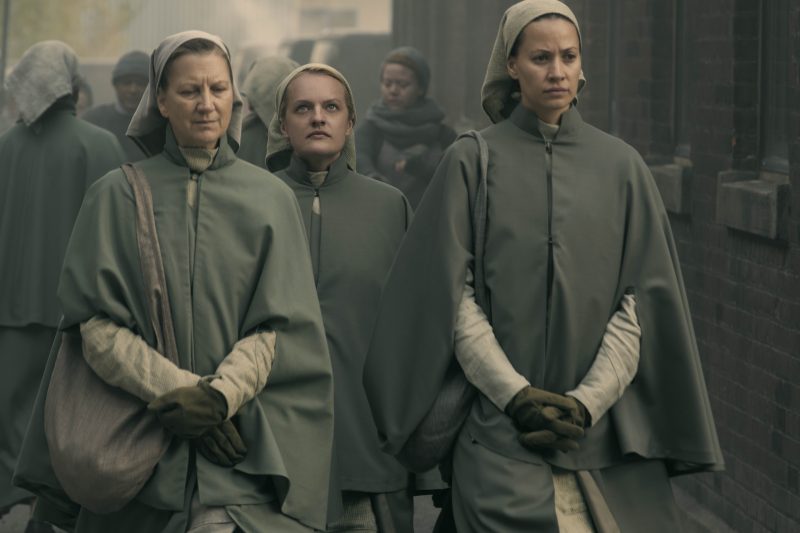 Speaking of the greater ins and outs of Gilead and the world at large, season three does dip its toe into these intriguing waters. We are granted a look further up the Gilead political chain (a guest turn from Christopher Meloni as a higher-ranking Commander is effectively chilling and engaging), while also getting to better understand just how Gilead functions in the world at large. If this show is going to run for as long as Hulu seems to want it to run, the series needs to devote more time to exploring the world it has created. While season two clearly started having growing pains, this third season is really suffering from the insular focus on two main locales: Boston and Toronto (which gets shortchanged far too often). We do get a trip to the seat of Gilead’s government in season three, but it might just be too little too late at this point.

So, is season three worth watch? At this point, there isn’t much here to recommend people sacrificing an hour out of their week to watch. I will say, the torture porn aspect of the series (including physical abuses, maiming, and ritualized rape) don’t appear on screen throughout these first six episodes, so the series feels less emotionally brutal (not that you can forget those atrocities are still happening, albeit now behind closed doors). One could even binge these episodes and not get particularly numb (although you might get bored). If you’re still on the Handmaid’s Tale train after season two, give this one a go. If you were already annoyed with the manipulative arcs that have been designed to keep the show around longer, rather than to provide us with interesting character development driving a story that moves, I’d wait the season out. Maybe things hit drive in the back half of season three. But so far, it’s a lot to slog through to reach that point.

The Handmaid’s Tale premieres the first two episode of season three on June 5, on Hulu, with the series debuting a new episode each Wednesday in the following weeks.