"Jennifer Lawrence remains The Girl on Fire"
By: Steven Armstrong | Movie Reviews | November 22, 2015
Here we come now to the end of it all. No more games. This is the piece fans of the series have been waiting for and if you were one of those who might have had a problem with last year's Mockingjay Part 1, then this one just might satisfy you. A tough deal it is to be Katniss Everdreen, the girl on fire. Once Panem's favorite sweetheart, turned solider for the rebellion. Who would volunteer for that if a choice presented itself along those lines? Not very many. As it stands, it is Katniss' volunteering that got us all the way to this point and it is as dark as it gets, which fans of Suzanne Collins' book will certainly appreciate. 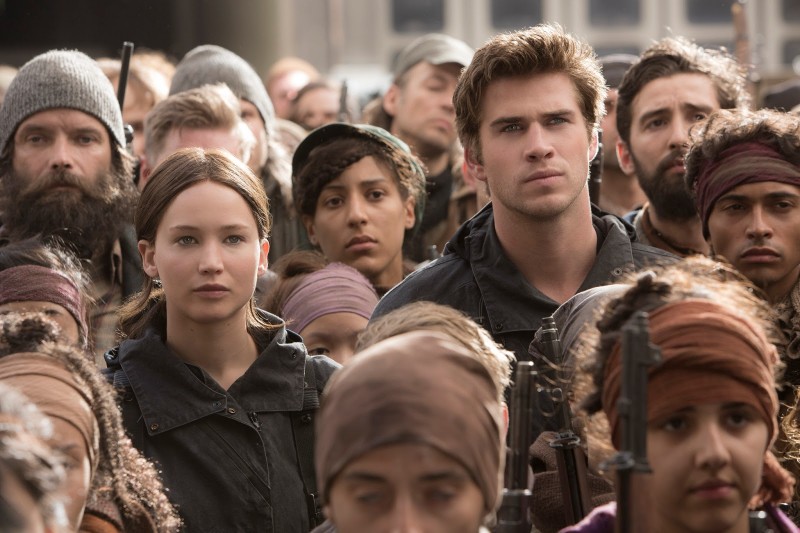 Picking up immediately after the events of 'Part 1', we find Katinss recovering from an attempt to kill her. Peeta is damaged at the hands of the Capitol's experiments, which prompts Katniss to thrust herself into the frontlines of the war, wiling to do or be whatever the rebellion needs her to be for one desired outcome: the death of President Snow. Still, she finds herself juggling the two love-interests of Gale, her lifelong hunting partner and Peeta, her fellow survivor of the Hunger Games, which add to the tension and internal struggle she manages along with the war and keeping her family and friends safe. On some level, each film in The Hunger Games  series has had one major theme in common and that is war and the effects of it. No where is that more apparent than in both parts of Mockingjay. PTSD is huge and the psychological and emotional scars from such harrowing experiences are permanent, working their way through Katniss and her crew. This is conveyed beautifully by the actors and leading the pack of course, is Jennifer Lawrence who remains just as powerful as she has ever been. Her nuance and boldness lends the proceedings a weight that is more appropriate for how heavy the story is and she carries it as if were the easiest thing to do save for walking. She is easily the beating heart of this film. 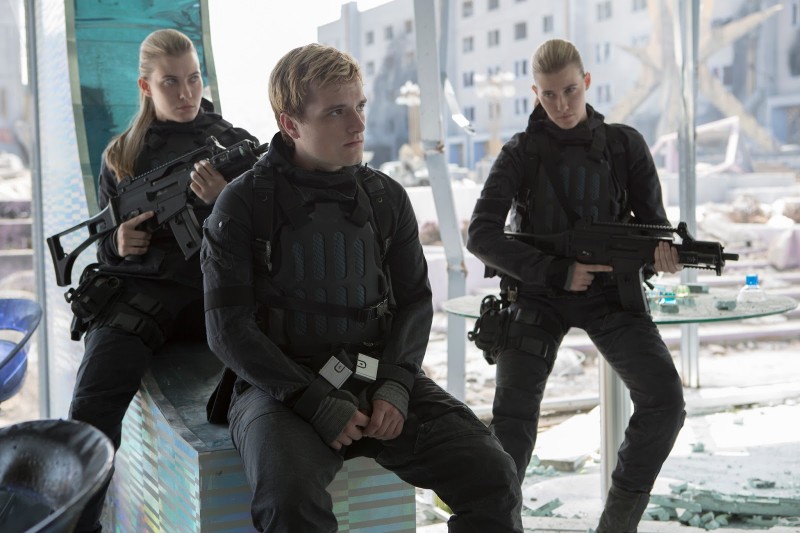 Of course she has strong support around her that helps fill out the edges in the likes of Josh Hutcherson and Liam Hemsworth along with Donald Sutherland and Julianne Moore. Woody Harrelson and Elizabeth Banks add some needed flavor and the great Phillip Seymour Hoffman is a treat to see. Director Francis Lawrence and his team managed to put the film together in a way that does not feel as if Hoffman's absence left a gaping hole in everything, which is no easy feat when an actor passes away in the middle of shooting. Still, the scenes Hoffman is in, are natural and welcome. Other highlights aside from the stellar acting, are the action sequences. There are not a huge amount of them, but they are thrilling and hold true to the book, particularly the film's centerpiece sequence, which takes place in the tunnels underneath the Captiol, which fans will know all about. It is a wonderfully executed sequence from start to finish even if we cannot always tell exactly what is happening and to whom, it adds to the intensity of such an ordeal. It is shot in a way that feels appropriately claustrophobic and dark, it is a sequence to rival some of series' most exciting. 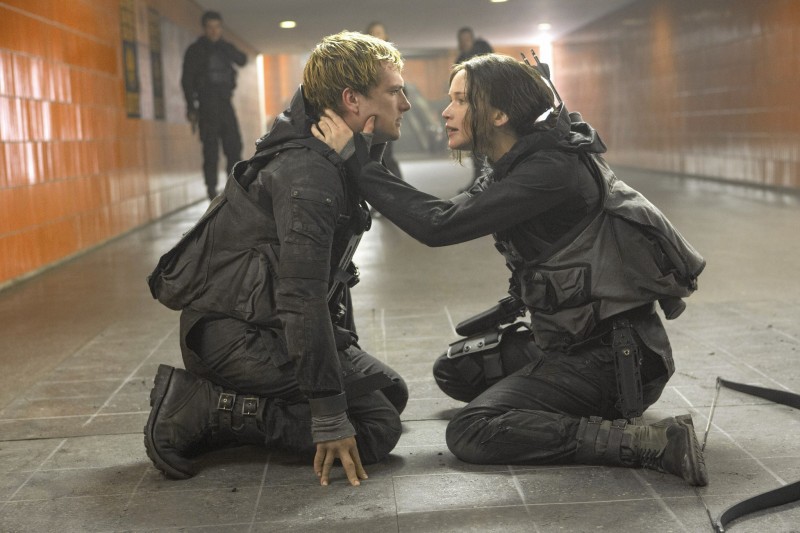 James Newton Howard's score is absolutely emotionally moving and and rousing when it needs to be. 'The Hanging Tree' motif from 'Part 1' is brought back here smoothly in the background, setting the tone for the headspace we and the rebels should be in as Katniss and company march on through the trenches to end the war and end the games. It is a beautiful piece of music and works wonderfully in conjunction with motifs from the first film. Howard's score here is probably the best of the series. The largest strike against the film, and this is probably as much a source material issue as it is an issue for the movie, is that the real love story that should have been given more attention than the one involving the dynamic between Katinss, Gale and Peeta, is the one between Katniss and her sister Primrose. Those who know how everything goes down will note that Prim is the catalyst for everything that happens to Katniss from the first film to here. From a filmmaking standpoint, it might have been nice to include possibly a few more scenes between the sisters to give that relationship more heft in the context of this film. If you can add a scene say, like the one from Catching Fire, where we see President Snow interacting with a granddaughter that is not in the books, you could add some more scenes with Prim. The only consolation is that there is a beautiful, unspoken dance scene between the two which is lyrically shot, and in many ways, says more than any other scene with dialogue ever could. 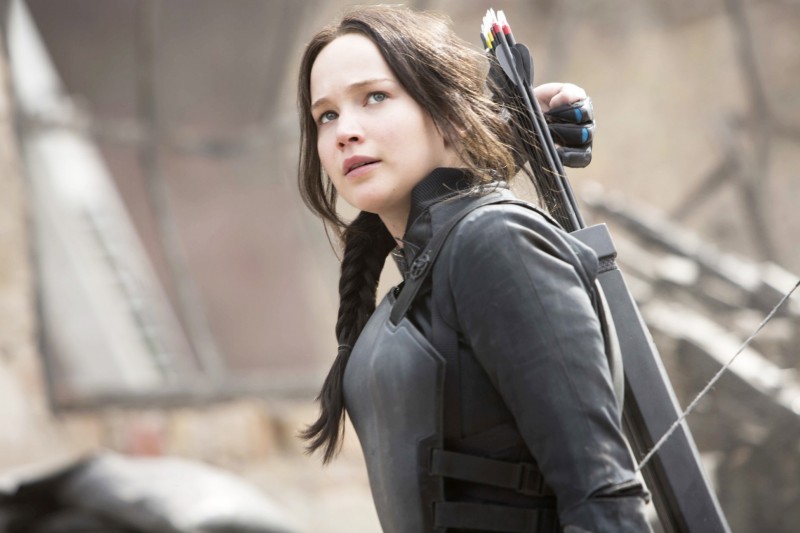 The ending of the film also almost a little too faithful to the book, boldly so. The epilogue of this story feels more effective in the book, than in the movie. It might have been better to end the film just before said epilogue because it does not necessarily add anything to the story especially since all the threads have been tied up. Along those lines, splitting this film into two parts was not at all necessary. Elements from both Part 1 and Part 2 could have been combined resulting in a very strong trilogy-capper. Still, both are very well-made films and Francis Lawrence did a remarkable job directing a talented cast of performers and handling such a massive undertaking as The Hunger Games. Mockingjay -Part 2 is undoubtedly a satisfying close to a stellar film series.
Rating
8.0
Pros