"For This Shark Warning Take Cover, or Better Yet, Just Cover Up the Television"
By: Erik Walker | TV Reviews | August 21, 2018

Forget Sharknado, Ian Ziering said there could be a 90210 Reunion!!

This isn’t the buzz SyFy wants viewers to care about as they watch or contemplate watching the last and final Pop Culture phenomena known as “Movies that start with Shark and end with Nado,” but since SyFy ignored our press request for more info on the film anyway (maybe they feel like we’ll spoil the fun for France, Germany, or The Middle East, where the film doesn’t come out until later this week), that’s legitimately the best news that has come out of the sixth and final Sharknado film, aptly titled “The Last Sharknado Movie.”

Forget Sharknado, Ian Ziering said there could be a 90210 Reunion!!

But back to more mundane news. And by mundane news we mean the sharknados. Or is it sharknadoes like toes. Sharknadi? You may have more fun contemplating what the plural of “sharknado” is than actually watching this final installment of the popular so-bad-it’s-good film series on SyFy.

Because it’s… well, not bad enough to be laugh-out-loud funny so it’s not good. At all. 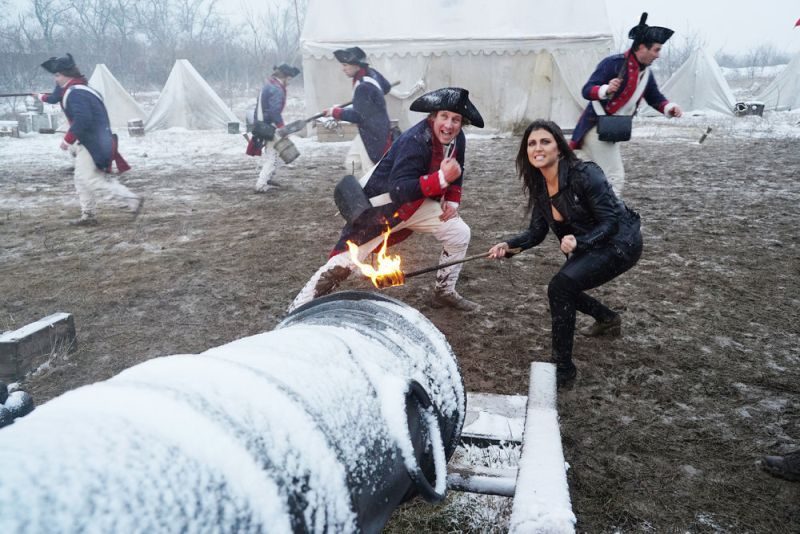 In “The Last Sharknado,” Ian Ziering (there could be a 90210 Reunion!!) is back as Fin Shepard, a time traveling surfer with less charisma than say, a Dr. Who…or Marty McFly…or Captain Kirk…or anyone on Timeless…or (you get the picture) and his traveling companion is April Wexler (Tara Reid) and they learn that they must journey through time to kill the original—yes, the very first—Sharknado—so they can stop all the terrible Sharknado deaths that have happened in the past and reset history and (hopefully) get back home.

Great Scott!-- it’s so Back to the Future that they reference it. Multiple times. Fin’s grown son from the future,  Gil (Dolph Lundgren) gives him a shark pin that—when it hits 88 mph—will jump him back or forth into time—along with a device that is pretty much like a flux capacitor that they awkwardly hold onto throughout the movie. Gil has rescued a lot of previous dead cast members so they can join them (and sometimes re-die or re-get-lost) on this nearly impossible journey. Can they do it? And more importantly, can you sit through the film without changing the channel. Or falling asleep. Or drinking. I thought not. 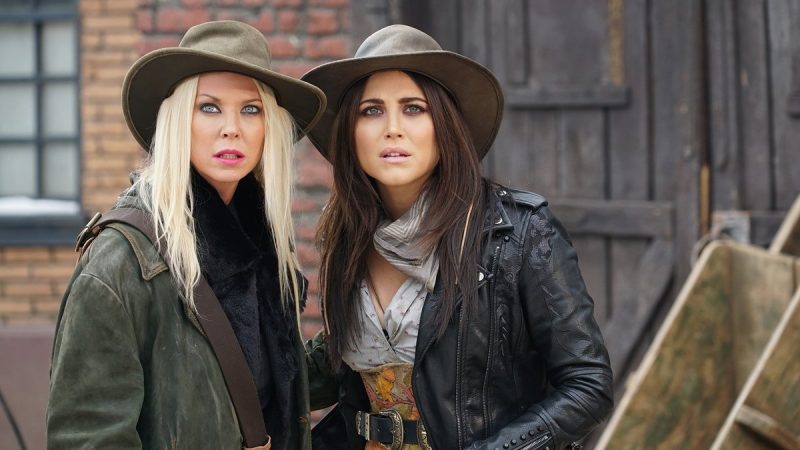 Now a lot of the material doesn’t make sense in Sharknado. Some of it doesn’t make sense intentionally. And that is actually… good. For example, Darrell Hammond, of SNL, plays George Washington…but with his Bill Clinton mannerisms and voice. Why? Because it’s Sharknado. It’s not particularly funny. It makes no sense. But in the Sharknado world, of course it makes perfect sense. Why not talk to a Bill Clinton-ish George Washington and warn him that besides the British you best prepare for an imminent attack from sharks flying out of the sky?

Other welcome moments include a bizarre shout out to the days of King Arthur, where a seemingly drag-queen Morgana (Alaska from RuPaul’s Drag Race) becomes the star of the show, Neil DeGrasse Tyson is Merlin, and (of course) Fin becomes King Arthur, magically lifting a sword from a stone just in time to zap all the attacking sharks that are about to kill everyone at the castle. (Kids at home—that’s a great thing to put in your book report for what happened in a King Arthur adventure you read over summer, no?)

And in a strangely touching scene, we get a lot of back story and moral dilemma—should we change the past if it endangers our future—thanks to bar-tender-turned faithful shark hunter Nova (Cassie Scerbo), who has to ponder whether it’s worth risking everyone’s future to save her grandfather,—who died in the original Sharknado—and there is some genuine emotion! For about five minutes in time it became very close to a very poorly made (but that’s still about 935% better than a good SyFy film) Hallmark Hall of Fame flick, but then, of course, flying sharks. Lots of them. Plus, some 85-year-old dude “captaining” her grandfather’s boat making weird faces (if you care, he really was from Love Boat --which, to be fair, aired before I was born, but I looked it up and he was Dr. Adam Bricker (Bernie Kopell) and maybe because he was so old he steered the boat directly into the sharknado (because why not?) and the scene had other nonsense involving April’s robotic head being dropped in water and lots of people being eaten and Fin whining he can never stop people from dying and then characters getting zapped into the future all in one crazy scene that can’t begin to make sense. Except in Sharknado-world.

The 1970’s did bring us to a scene with Tori Spelling! A mini-90210 reunion of sorts that was acknowledged on screen when she asked “Wait--You look so familiar. Did we go to high school together?” and Fin noting “ I would have remembered it." Which made everyone watching at home say, “Awww…” but then scream: Forget Sharknado, Ian Ziering said there could be a 90210 Reunion!! 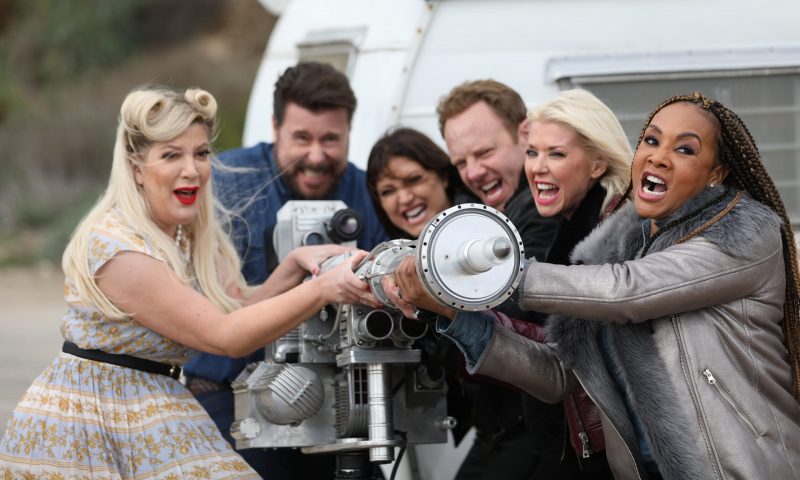 But for all we wanted this film to be bad, it wasn’t bad enough to be entertaining. It was just strange. WE jumped from dinosaurs to King Arthur to George Washington to The Wild West to 1978 to a bizzaro future world of 20,013. And in 20,013 the world became a world infested by metallic sharks and robot Aprils. The evil April robot created an army of April robots (all wearing outfits similar to futuristic flight attendant garb) wanted to clone Fin, but were keeping the original April alive in a glass coffin.  For a good fifteen minutes the film took a shark break to seemingly enter Dr. Who land (minus say…good writing and good acting and good costumes and good music and good everything) and it wasn’t bad enough, funny enough, silly enough, or interesting enough to do anything positive for the film.

The movie then shifted to a final battle (which I won’t spoil here, but needless to say is so bizarre I can barely explain but I will hypothesize it was written by someone entering that short story contest where the worst lines possible win a prize) because it looked more like a missing scene from the old 80s hit Miami Vice of a drug deal gone bad on a boat and… then flying sharks and Fin and April trying to save the day and voila… we end up close to where we started in film one. Before they get home there’s a giant cornucopia of madness (a strange nearly psychedelic scene of weird images in history and, of course, lots of flying sharks.)

Honestly, I like happy stories. I’m glad it ends well. I did want Fin and April and Nova and company to be safe. They deserve it, after all and Fin and April promise to live their lives in the Jayhawk State. (Kansas is actually the Sunflower state but I don’t think anyone really knows that). Slaughtering about 2.8 million sharks in six films from the dawn of time to thousands of years in the future… well, heck, you do need a vacation in Kansas. Away from all oceans. (And….there is a bit of irony because Kansas still has tornadoes. Just ask Dorothy. So perhaps we can find a sequel with some other creatures that come via land tornado).

But that’s the problem with The Last Sharknado. It doesn’t stick in the long-term memory. It fades. At one point in the Revolutionary War scene, Ben Franklin was trying to help use lightning to power up our time traveling shark hunters, and asked “Do you think history will remember me for anything but this stupid kite?” He got a mournful response back. “It’s pretty much just this kite.” That line was actually funny. But the rest of The Last Sharknado wasn’t. It wasn’t memorable enough. So when we actually try to remember these films years from now, history will probably remember the original Sharknado in its wonderful horribleness. This one will be erased from our memory. And that’s probably a good thing.

Because, after all, forget Sharknado, Ian Ziering said there could be a 90210 Reunion!!