The Legend of Korra – Out of the Past

"Out of the Past" was, as suggested by its title, very much about the past as Korra finally succeeded in connecting spiritually with Aang, the previous Avatar. The episode brought an end to the Tarrlok arc, establishing Amon (who is disappointingly not Tarrlok) as the ultimate nemesis of the season.

The story picked up where it left off last week, with Tarrlok bloodbending Korra toward a metallic, self-walled cell very much like a traditional phone booth. He then returned to City Hall to stage the battle scene and injure himself in order to pin the blame of Korra's disappearance on the Equalists and their leader Amon. It worked at first, sending Tenzin, the recovering Lin Beifong and Korra's friends on the trail of the non-bending rebels. Metalbending can be both effective and really spectacular in a way that even airbending is not. Lin Beifong shows it here by single-handedly taking care of most of the work and the heavy-duty fighting during the team's investigation and subsequent incursion into the Equalists underground stronghold. How can you not enjoy the sight of Lin dressing up without lifting a finger or the way she nabs the Equalist guards into that dark tunnel? 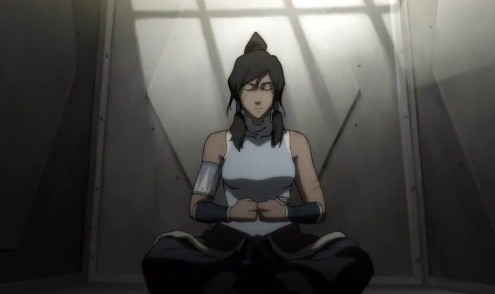 The story didn't try to delay the discovery of Tarrlok's involvement in the Avatar's disappearance, which is good. By the end of the visit to the Equalists base, suspicions were clearly redirected toward the bloodbending councilman who, after a last impressive show of force, started a fast-track downfall from villain-to-be-reckoned-with to irrelevant character, which wasn't as good. I will not miss Tarrlok rounding up non-benders or manipulating the council, but it seems to me that phasing out a character that had so much charisma should be done more respectfully or with an appearance of preserved dignity. If for no other reason, because his storyline has allowed our heroine to connect with the previous Avatar's spirit in very thrilling past circumstances.

Locked in her phone booth cell, Korra is forced to deal with her inner self and succeeds for the first time on her own terms  in reaching the until-now-elusive spiritual part of her Avatar power. The connection to Avatar Aang gives her an insight into past events surrounding the trial of a man suspected of bloodbending. I liked how Korra could go back to her vision at will, showing her command of her new "skill," and how her visions tied back to the present through Tarrlok's connection to Yakone (the bloodbender of the past). I also liked how in a few minutes those visions educated us on the world Korra lives in (bloodbending is illegal, Toph Beifong single-handedly developed metalbending, etc.). I even liked how charismatic Avatar Aang appeared and his interaction with Toph Beifong (we sure know where Lin Beifong gets her personality from). What I liked less was that Yakone and his son Tarrlok turned out to be "petty" criminals or little-league villains, not worthy of a warning from a spirit, in my opinion.

What the Tarrlok storyline successfully achieved  was increasing the mystery around Amon. A mystery very well summarized by Tarrlok's question, "What are you?" when he realized he couldn't bloodbend the masked super villain. The story went even further by getting Korra, who had just achieved an impressive escape, to run as fast as she could instead of facing her now frightening hooded foe. Bit by bit, the series has set him up to be an opponent worthy of a grand finale. 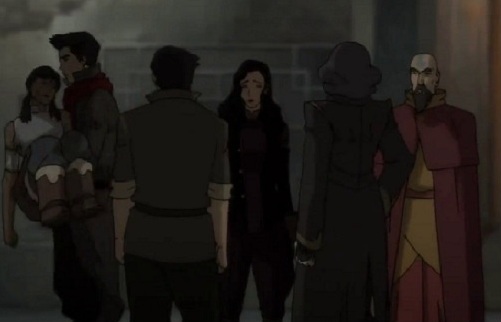 I have a weakness for damaged characters and I tend to root for the underdog, which is why I find Lin Beifong such an attractive character and also why I feel for Asami Sato at this point. It's tough to not find it unfair the way the story has used and abused her so far. She had an active role in bringing down her father and now she is forced to witness the one thing she could cling on to—her relationship with Mako—weaken before her eyes. Korra is a very likable heroine. Her innocence and tomboyish, unsophisticated persona is endearing, but did it have to be at the expense of another likable character? Especially one so recently struck by tragedy? Well, at least one of my favorite comic reliefs of the episode involved Lin and Asami (Lin: "Hope you got enough beauty rest. Come on, I am busting you out.")

I found this episode stronger than most of the previous ones in the season, even though—as I said above—Tarrlok could have gone out with more of a bang. Part of it is due to the humor which, if not to one's taste, can really bring down an episode. But more importantly, I believe the commanding presence of Lin Beifong and the survey of the past by Korra did the trick. Also, not liking what is happening to Asami doesn't mean it is not well done, which it is so far...