The Legend of Korra – Peacekeepers Review: The Action Increases in Another Great Episode

Korra is a very brash Avatar, but her heart is in the right place. She’s truly the embodiment of the word "teenager." This week, the Avatar goes to a peaceful protest and betrays her neutrality. Korra demands the President get into a war. She tries to go behind his back to get the Army to help. Korra’s been going to the world’s highest officials to try to get them to martial action on a global scale. That’s so not-Avatar (and everybody else on the show but Korra knows it). The episode is called "Peacekeepers," but Korra is anything but - it’s Mako who has a legitimate peacekeeping perspective.

At the protest, an explosion occurs. Mako sees something interesting: a saboteur planting the explosive. Someone is trying to start a war. By hiring a firebender, they’re fanning the flames of conflict. And, despite Mako finding out exactly who committed the crime, nobody listens to him. The Avatar universe often shows the failures of bureaucracy: ignoring the voices of those who don’t have authority. However, when Mako needs to fess up Korra’s plans to the President, he does so. The little guy has to listen to the big guy. And that’s often why things go so wrong so quickly (cool moral for kids!).

Why won’t Korra listen to Mako? Mako dumps her and Korra ruins his desk. Honestly, reader, I’m glad Mako breaks up with her! She’s being a jerk. Now of course, Mako doesn’t know how to tell his girlfriend she’s wrong. This is, admittedly, a very hard skill that takes years to acquire. But still, Mako’s a jerk too, in a way. But a more correct jerk who’s thinking about peace. And don’t we know that the special couple will be reunited in the end.

Varrick is my favorite new character even though he’s the entire reason for wars. Varrick doesn’t think about war in the terms of human lives, but rather in terms of financial success. “If you can’t make money during a war, you can’t make money.” he says. Plus, he has so much influence! He’s friends with the government and the Presidents, he says, "I was a big contributor to his election campaign - well, him and the other guy. You gotta hedge your bets,” as well as the diplomatic Avatar. He owns the company that builds tanks and weapons of destruction. He’s also making propaganda movies and selling merchandise! He’s all about branding, making money, and success. What a slimeball! But the show makes him funny, gives him all the best lines, and reveals that he's a slick talking businessmen that causes innocent people to die in wars (great lesson for kids!).

Innocent people like Bolin! Having nothing to do, Bolin goes for a night on the town with Varrick. The businessman realizes Bolin’s natural charaisma, and decides to turn Bolin into the propaganda star of the war campaign. This is one of my favorite stories of the season. “Being famous is like being hit in the face with a rock all the time,” Varrick says, and that’s exactly what he plans to do with Bolin by making him Nuktuk: Hero of the South! Bolin is too naive to see what’s happening. I love Bolin.

So much happens in an episode of Korra. And we’re not done yet. The littlest subplot this week focuses on the littlest airbender, Meelo. Little airbender guy gets himself a Momo, and now he’s figuring himself a Momo trainer. Or a lemur trainer, as the show calls them, despite real lemurs being flightless. Tenzin teaches Meelo how to be a master trainer so the boy trains every single lemur on the island. The lesson he learns: it’s lonely being the alpha male (great lesson for kids!). You have to tell everyone what to do and nobody likes you. It’s way better to be friendly and have fun. 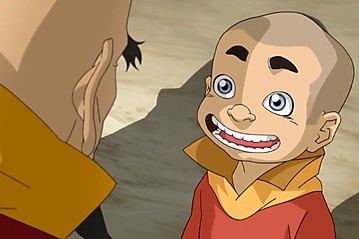 Also, those creepy twins finally have an interesting role to play. As Unalaq, the northern water tribe leader, plots war strategy in a creepy villainous tower, he sends his children (Korra’s cousins) to apprehend the Avatar. After a high-speed speed boat/jet-ski showdown, the Avatar is confronted by a gigantic angry spirit. Remember: the spirit world is the entire pretext for this season. The spirits are angry! And now here’s one to show that anger. Korra tries to do her spirit dance, but it doesn’t work and the episode blacks out with Korra lost in the ocean.

Is Korra dead? Come back next week as we find out more in the best cartoon drama on television!