The Legend of Korra – Turning the Tides

"Turning the Tides" was a complete reversal of circumstances for the equalists and their leader, Amon, who took control of Republic City with insulting ease. The adrenaline-fueled episode also saw Lin Beifong losing her bending abilities after heart-crushing moments with Tenzin's family.

The coup led by Amon—with Hiroshi Sato by his side—showed Republic City's lack of power. The metalbending police barely resisted and council members were nabbed with alarming ease. Soon after the beginning of the equalists' attack, the airbending master was the only councilman left. He then joined the police chief Saikhan and the few remaining officers in a short-lived resistance that merely postponed the inevitable. Things happened so fast that the episode gave the impression it was rushing through the coup (in the city) to get as quickly as possible to the more personal struggles on Air Temple island. 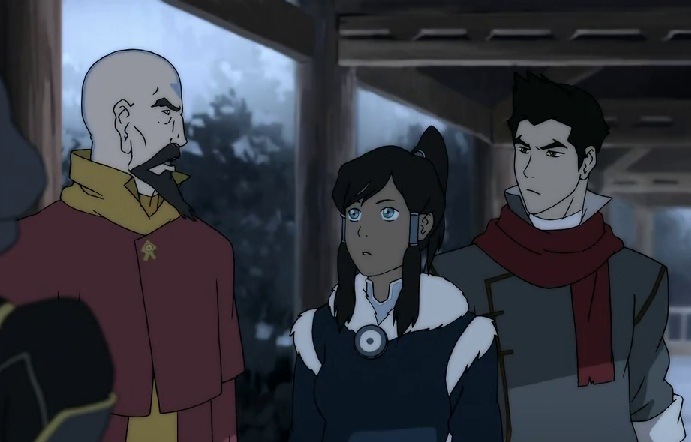 After showing how aerial and elegant airbending can be, Tenzin rushed back to his family on Air Temple island. Before leaving for the council meeting, he had awkwardly asked his old flame, Lin Beifong, to protect his loved-ones in his absence if the equalists attacked, and attack they did. The very capable Lin tried her best, using crude earthbending and the more refined and impressive metalbending against the "chi" blockers without the success she had hoped. I liked how she was helped, or rather saved, by Tenzin's children (the ones she was supposed to protect) with one of them yelling "Stay away from my dad's ex-girlfriend!"

The battle scenes on the island seemed to have a loftier, more noble purpose compared to everything that happened in the city. They showed how well the last airbenders in the kingdom were prepared, how strong a family they were, and finally they set the stage for Lin Beifong's swan song. The story did a good job with Pema, Tenzin's wife, who delivered her baby while the fight was raging outside. Because we have come to know the last airbending master and his family, there was more room for humor and we were more worried because what was at stake was closer to home and was somehow more personal.

The showrunners seem to have a taste for the type of drama involving love triangles, irrespective of the generation. Lin Beifong's sacrifice to allow the family to get away was gripping because of how it happened, but it was also extremely touching because of the buildup on Air Temple island. In just a few hours, Lin moved from guest to babysitter to guardian. With her last look at Pema and her children, she gave the impression that she would do anything to protect them, not only because they were the last airbenders, but also because they—as a family—deserved the happiness that had eluded her. Watching Amon take her bending away was sad, but there was no groveling, nothing like last week with Tarrlok. 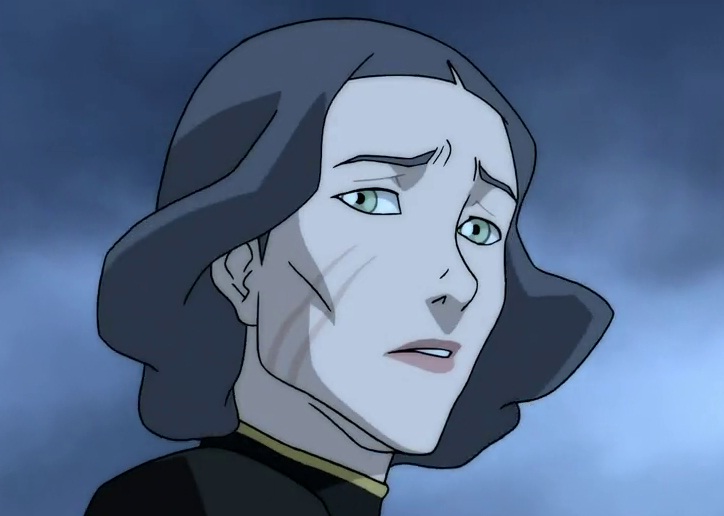 And yes, our Avatar was also featured in the episode, but was far from being its epicenter, even if the story started with her recounting her abduction and the conclusions she drew on Tarrlok's identity. Very quickly (too quickly for my taste) she was dragged between Mako and Asami as the passive catalyst deepening the rift between the young couple. I liked how Pema left the room to allow the two teenagers to work things out, and Asami sending Mako next to Korra on the backseat was well done. On the other hand, I disliked Korra's passivity, even though she seemed to understand something wasn't right. The story didn't shine by using Mako as a plot device. Having a character whose feelings are a mystery to everyone, even to himself, is perfectly fine but having one who seems to exist only to create some tension within a group is more damning. To Korra's defense, it should be said it is very human to like being taken care of by people we love and we are sometimes even willing to close our eyes and willfully refuse to see things that, if dealt with, would lead to a change in such a personally satisfying status quo. However, the real failure of the episode, as far as Korra is concerned, is that, despite her short and quite impressive battle scene,and her understanding of Tenzin's strategy, the quarrel between her friends seemed to be the more remarkable and memorable thing around her this week.

"Turning the Tides" wasn't as thrilling as the previous episode. Part of it is due to the fact that it was too busy trying to rush us to a moment ripe for a final showdown. It was too busy handing over Republic City to Amon and too busy sowing the seeds of discord in "New Team Avatar" to produce a story that took care of itself. Even the appearance of the United Forces and their General Iroh at the very last minute seemed too easy a solution. Well, there was always Lin Beifong...