‘The Lorax’ Astonishes with $70.7-Million Debut

Shocking everyone with the sixth best animated debut of all time, beloved children’s book adapation The Lorax raked in a whopping $70.7 million this weekend. Project X also performed solidly over yet another strong weekend in 2012.

The Lorax may speak for the trees, but the popularity of this Dr. Seuss adaptation clearly speaks for itself. Obliterating even the most bullish projections (which barely exceeded a $50-million start) The Lorax made fools of everyone. It was the highest opening of the year thus far, the third best March launch of all time and the best ever premiere for a non-sequel animated family film. 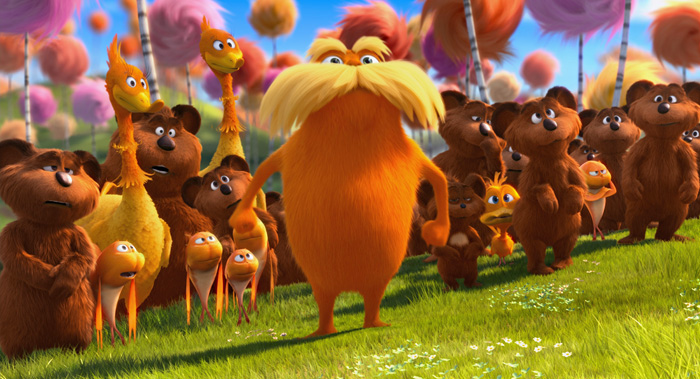 Universal and animation house Illumination Entertainment again proved to be a winning duo, following the equally surprising, $56.4-million start to Despicable Me in 2010 and Hop last year. A powerful marketing campaign coupled with the fact this was the first animated movie of 2012 (except The Secret World of Arrietty) meant that families were willing to pony up the dough. For a year that started out impressive, 2012’s box-office rebound appears to be escalating toward summer.

Chalk another victory up to the found-footage genre as the no-star party flick Project X rocked the block with $20.8 million. This marks the fourth film this year (after Chronicle, Act of Valor and The Devil Inside) that not only exceeded projections but boasted no well-known actors and a first-time director. The answer to why the age of the movie star is dying seems crystal clear with the performance of these low-budget, experimental offerings.

Following the great debut of aforementioned war flick Act of Valor, another solid weekend followed with a slim 44-percent drop and $13.7-million take. Word of mouth is still strong amongst young adults and while those in the mood for debauchery ventured to Project X, those looking for a bloody good time went for the Navy SEALs.

Finally breaking into the top 10 after 15 weeks of release, Best Picture winner The Artist rode the wave of buzz from its Best Picture Oscar winner to a $3.9-million weekend and a cume of $37.1 million. The acclaimed silent film should hang around for quite awhile as older audiences finally make their way to see what all the fuss is about.

Next weekend It’s make or break for a franchise, the test for an up-and-comer and death spasms of a former A-Lister as three new movies enter theaters. Disney’s $200 million-lus blockbuster John Carter will try to prove the uneasy chatter is just that as it invades 3,500-plus theaters. Elizabeth Olsen and a gimmick will try and bring out the fright crowd in one-take horror flick Silent House, which lands on 2,000 screens. Coming up the rear is Eddie Murphy’s latest non-starter, A Thousand Words, which will barely make a whisper in 1,500 houses.