The Newsroom – Election Night Part 2: A Satisfying End to an Excellent Season

Last week's episode of The Newsroom brought viewers into the night of the election. We are watching as the anchors and the senior staff reported the results of the elections to the country as they came in. Part 2 of election night commences this week and we see a group consisting of Don, Mackenzie, Charlie, Maggie, and Jim discussing the General Petreaus story versus reporting on the Todd Akin story. After deciding to report on Todd Akin because the story seems more relevant (they plan to report that Patraeus is resigning after he makes it public), we are taken to the desk with Will, Sloan, Taylor and Elliot.

Taylor tells Will that she heard from the senior staff members that they were planning to resign, and as a result, Will calls a meeting with all of them in order to officially brief them on the situation. The rest of the staff is not to resign and Will tells them that the reason that he, Charlie, and Mack were planning to resign was in order to have the rest of them take over. Don boldly tells him no, stating that if they are going to resign, then the rest of the staff will stand behind them. However, it seems that Don is one of the only ones who wants to stay, which he reveals to Halliday later in the episode -- this confession comes after she tells him that the decision has been left up to Reese, who is willing to accept their resignations. Charlie and Will talk about the resignations more later and Charlie finally decides that they have come a long way and that it would not be right to resign.

Next, Charlie abandons his spot as the anchor, telling Elliot to take charge, and Mackenzie does the same with Don. It appears that they are going off somewhere to talk, but where and why? The next scene finds us in the dressing room with Mack and Will bringing up their relationship once again and arguing about the way each of them has handled things. Mackenize tells him that she feels like she is going to hit him and sends him to the other side of the room, but this whole time, the audience feels a lot of tension between the two of them. Much of the talk is about the ring that he bought her, which he says was a practical joke, although we later see him pull it out of his drawer during a conversation with Charlie; afterwords he immediately takes it to Mackenzie and proposes to her in a shocking moment on the show. The two of them walk into the room and announce their engagement to the rest of the crew, and everyone is happy for them. Romance seems to be in the air, as Sloan finally figures out who bid on the book that she was supposed to have signed. Just as the trail went cold, she sees a sign in Don's office that makes her realize he was the one who did it, immediately going into the control room to kiss him and it appears that they have finally admitted their feelings for each other after all this time.

Will, Sloan, Elliot, and Taylor continue to report results of the election, talking about the Presidential election as well as the races for the House and Senate. It is eventually announced that the House will retain a Republican majority and that the Senate will remain in Democractic majority. Will announces that Obama has won Pennsylvania, a battle-ground state, just before Leona slips him a note that says Reese willdecide. With the three of them - including Charlie - refusing to resign and the senior staff behind them as well, it seems that ACN is still alive and kicking and will live to see another day as we all get excited for another season. 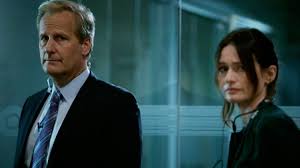 Things get interesting between Jim and Maggie yet again, and it is also discovered that Lisa is in the building after Charlie causes her to fall while she is trying to serve champagne. Jim went upstairs to talk to Lisa and figure out what she was doing, realizing that she had never heard about what was going on with Maggie, but he was able to confirm that Maggie cut her own hair, as Hallie suspected. As the season comes to a close, ACN looks to regain their power as a network and Reese announces that they will not give money to Jerry until a judge orders them to do so.  Don is incredible throughout this episode, and while we have seen Will and Mack bicker back and forth throughout the entire show, it is nice to see them finally together as well. I give props to Sloan for stepping up and admitting how she feels to Don, too. With all of the love in the air, the love anthem "Let My Love Open The Door" even plays us into the credits as everyone is happy and feeling emotional at the end of the season.

-- Taylor discusses how she plans to bring Jim in on her new project, despite her dislike for him. Realizing that she cannot work with those that she likes all of the time, she tells Will, "If I only worked with people who liked me, I would have to get my dog Howard to be my partner." Taylor continues to bring out more humor in this show. I love the addition of her character to the show and it is great to see her again after watching her protrayer, Constance Zimmer, on Entourage.

-- In a fit of rage while he's trying to get Leona on his side, Charlie yells at her, "Can you understand me right now?" Sam Waterston's portrayal of Charlie has been brilliant on this show, especially in recent episodes. He does an excellent job of taking control and standing up to his boss in this scene.

-- Jim utilizes some humor when dealing with the disaster that resulted from calling Michigan too early for a particular candidate. "First, you can't bounce history and lately off of each other." He was previously told that their network has not had a very good history, especially as of late. Jim calls them out in a significant way, but feels that he was defeated after he hangs up.

-- "I've brutally hurt you and that's a fact and facts dont change, but in my lifetime, I've never done it intentionally." Will apologizes, not knowing what else he can do or say, and Mack walks out of the room. I am glad that they work things out later on. It is great to see that they are finally able to get over their differences from their past and be together.

-- Maggie: "There is a difference between being tough and wanting to be. You and Mack are tough. Don is tough. I want to be." She's explaining to Jim why she acted the way that she did when she was in Africa. This is a very significant statement coming from her and I look forward to seeing her character grow more over the next season.