The season premiere for The Newsroom logged an increase in ratings, due to the popularity of the first season and its status as the show that everyone was talking about last summer. An average of 2.2 million people watched the season 2 premiere, beating last year's series premiere of 2.1 million. After playing twice over the course of the night, the series earned a total of 2.6 million viewers. This is good news for HBO, since the network feared that they might have trouble finding success with the show, given its lack of the nudity, graphic sex and violence so common to HBO shows. The Newsroom show was created by the talented Aaron Sorkin, the man behind The West Wing and a number of other television shows and films.

The network renewed The Newsroom a month after the series premiere last summer and ended up gaining a total of 2.3 million viewers for the season 1 finale last August. The Newsroom stars Jeff Daniels as Will McAvoy, the head anchor on a television news team and Emily Mortimer as the executive producer for the program. The series also boasts an outstanding supporting cast including Dev Patel, Allison Pill, Sam Waterston. The show focuses on a fictional cable news network and all of the behind the scenes procedures that go on as well as drama that occurs on the air with various news stories. It frequently tackles real life news stories. The second season picked up where the first season left off in August of 2011, just before the beginning of the Occupy Movement, which was a major story in the season premiere. The series airs on Sunday nights on HBO at 10 p.m. 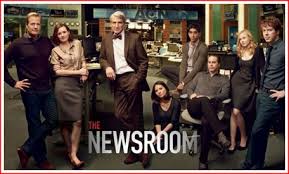