By: Dave Berg | Comic Features | April 25, 2012
The Brave and the Bold was one of the coolest, most unique comic books of the Silver and Bronze Age. It launched the Justice League and Teen Titans. The book started with The Silent Knight as it's star; and It featured early adventures of Hawkman and Metamorpho, before shifting to monthly team-ups featuring anchor lead, The Batman, with a different co-star every month. DC Comics Presents was a decent runner-up featuring Superman team-ups. Marvel had Spider-Man team-ups in Marvel Team-Up, and team-ups with The Thing from the Fantastic Four in Marvel Two-In-One. Superman, Spider-Man and The Batman have all teamed up with each other, but team-ups with The Batman are the coolest and most unique of all. Superman is more of a mentor in a team-up; Spider-Man the comic side-kick; The Thing a drinking buddy. The Batman is basically a loner. A mystery - a myth - an urban legend. He keeps to the shadows. He doesn't usually work with any one. So a team-up with The Batman is special. EPIC! 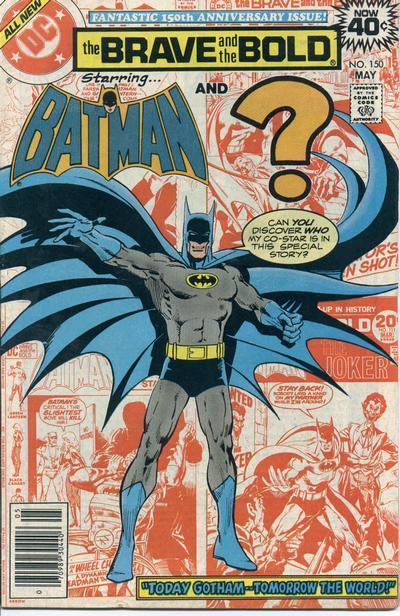 In 2007, The Brave and the Bold was relaunched with Batman; but even from the beginning this new team-up book was designed to have a monthly rotating cast. The book ended quietly with issue 35.

In 2010, Batman was on Cartoon Network and in an all-ages DC Comic as the star of Batman: The Brave and the Bold.

The Batman has has some very EPIC cross-company team-ups. The Incredible Hulk, The Amazing Spider-Man, Daredevil: The Man Without Fear; Grendel, Predator, The Mask; Judge Dredd and Spawn just to name a few. 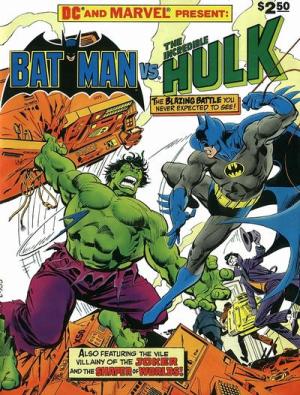 As a fan of both The Batman and The Brave and the Bold, there are at least five team-ups with The Batman I would like to see. The long-standing goal of The Brave and the Bold, was to pair The Batman with lesser known characters in order to shine the spotlight on the co-star. The same was true of DC Comics Presents, Marvel Team-Up, and Marvel Two-In-One. The co-stars and the villains were the real stars and The Batman was sort of an over-all, omnipotent background character. That's not an easy feat to pull off, but mysterious, shadowy figures like The Batman pull it off with ease. The team-ups I'd like to see are more on the grand scale like those above. Huge, sprawling epic match-ups.

5) The Batman and Doctor Who/IDW - 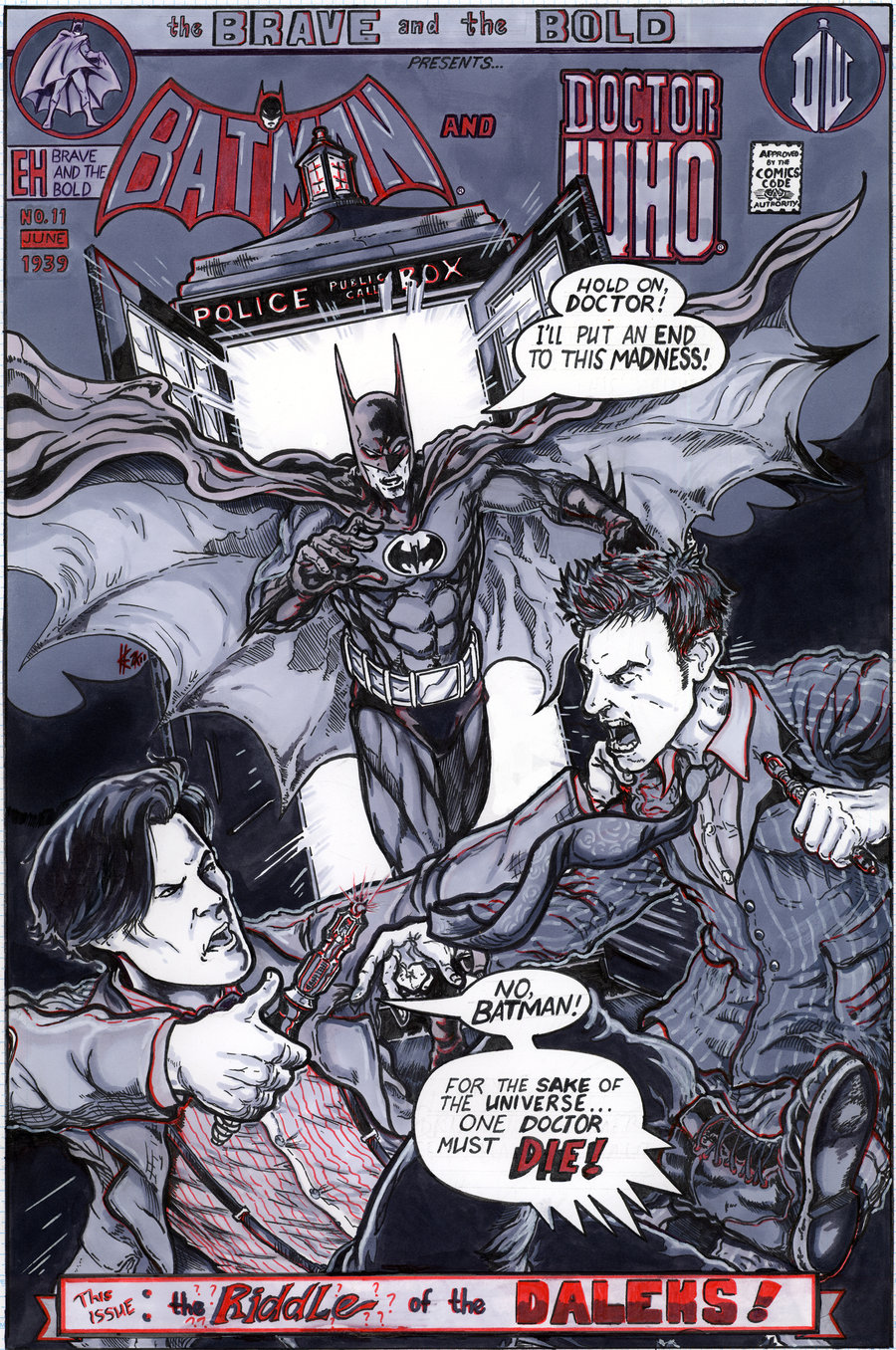 I will never forget stumbling across Tom Baker as The Doctor, chased by The Daleks on PBS. I was in high school and my sense of science fiction special effects was heavily influenced by Star Wars. It was obvious to me that he was running across a soundstage set. This show looked an awful like Classic Star Trek. At a time when Star Trek was enjoying a rebirth thanks to Industrial Light and Magic special effects. "Pass", I said out loud to myself and changed the channel to something else. Two years ago, my wife Cathy told me about a cool sci-fi show she had found streaming on Netflix. Starring Christopher Eccleston, who we'd seen in Gone In 60 Seconds and a few episodes of Heroes.

What is interesting about Doctor Who is the LEGACY attached to the character as well as his LONGEVITY. The Doctor is said to be immortal, incapable of dying. The Doctor can regenerate. What we see is that he becomes a different actor. Christopher Eccleston gives way to David Tennant, who in turn gives way to Matt Smith. Over the years, it is interesting to see The Dark Knight's look change, from one artist's interpretation to another; from one iteration to the next; one format to the next. Adam West's Batman was different from the serials of the '40's and different from the films starring Michael Keaton, Val Kilmer, George Clooney and Christian Bale. The Last Time Lord has quite a bit in common with The Dark Knight.

If The Caped Crusader can go up against The Shaper of Worlds, he should be able to face The Daleks, The Cybermen or The Master.

Okay, so maybe licensing might prove a challenge for this, or any potential cross-company team-up. I can provide a back-up team-up to each selection. If Doctor Who is not doable, then maybe ~ 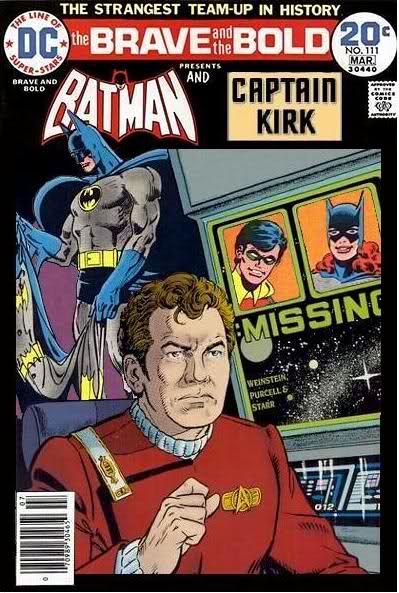 If we're talking sci-fi and characters with longevity with Doctor Who, then another, similar team-up would be Star Trek. If only to see an image of Adam West and William Shatner. Something like this.
Who wouldn't want to see the Enterprise take a slingshot around the sun or a walk through The Guardian of Forever from the 30th Century into current times?

The Classic Star Trek crew has teamed-up with the Legion of Super-Heroes and the crew of the Enterprise D is going to be meeting the 11th Doctor soon.

It would be pretty awesome and amazing to see - or not see, as the case may be - the Enterprise cloaked above Earth or Gotham Harbor, while Captain Kirk matches his charisma against Bruce Wayne and The Dark Knight matches skills against a certain pointy-eared, green-blooded hobgoblin!

That would be just as cool as a team up with The Doctor.

4) The Batman and James Bond - 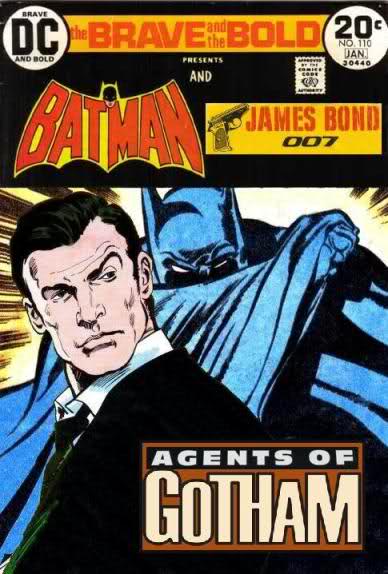 Gadgets, "babes" and bad guys - What's not to love about Ian Fleming's MI-6 Agent 007? Created out of the ashes of WWII, for the Cold War era, her Majesty's secret servant has regenerated for as much longevity and legacy as the good Doctor. The Queen has a few enduring national icons, Sherlock Holmes, The Doctor and James Bond.

One of the cool things about the 2007 relaunch of The Brave and the Bold was seeing Hal Jordan and Bruce Wayne in Vegas, and seeing Hal beat Bruce's luck. It would be cool to see James and Bruce match wits and luck at the Baccarat table, and swap cool gadgets.

One of 007's contacts here in the colonies is the CIA's Felix Leiter. Maybe another contact should be Bruce Wayne and Lucius Fox at Wayne Technology! Lucius could be Bond's American Q.

Prior to taking on the dual identity of Bruce Wayne and Batman, Adam West was seen in a series of James Bond-esque television commercials Legend has it that it was these commercials that in part led him to beat out Lyle Waggoner for the part.

Now, if Bond isn't licensed to thrill with Batman ~ 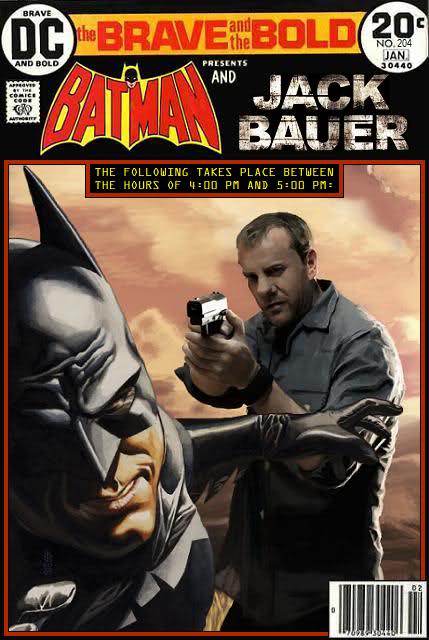 JB! James Bond. Jack Bauer. How is it they are never in the same adventure in the same real time? It would be just as cool to see The Dark Knight teamed up with either Jack Bauer from 24 or John McClane from Die Hard.

3) The Batman and The Bionic Man/Dynamite - 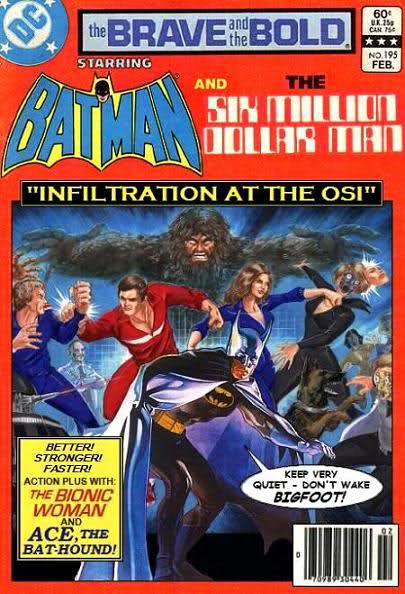 "Steve Austin, astronaut, a man barely alive... We can rebuild him. Better. Stronger. Faster!" If that ISN'T as close to a perfect description of how Bruce Wayne became The Dark Knight, I don't know what is. The old images of Bruce working out in the Batcave, and working in his chemistry lab, stretching to the height of human and physical perfection to be better, stronger and faster. I grew up watching The Six million Dollar Man in the '70's. It's still one of my favorite shows; and, it is very cool to see The Bionic Man from Dynamite Comics. Besides, Steve Austin went from astronaut to super-spy, working at the OSI, which keeps him in good company with Bond and Bauer.

If that's not possible here's a back-up ~ 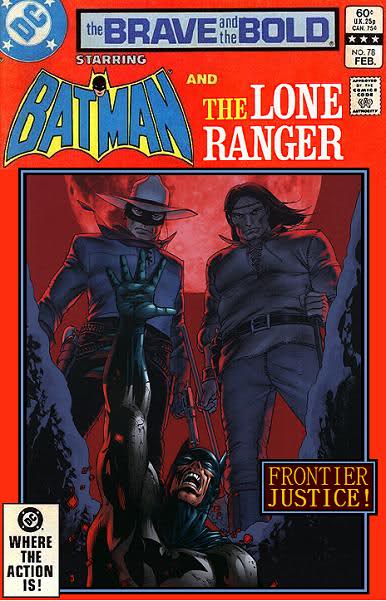 The Brave and the Bold and DC keep coming back to Jonah Hex. Legend has it that Jonah Hex has had more than one run-in with Ra's Al Ghul. He's done time in Gotham City. He is one of the more frequent Brave and the Bold team-ups. Why not go for one of the classic team-ups with a legendary vigilante - The Lone Ranger! Sunday mornings were always filled with reruns of The Lone Ranger and Tonto. There was an failed attempt to revive the masked man in the '80's. Dynamite seems to be doing pretty good with that, and Johnny Depp's turn as Tonto with Armie Hammer as the masked man might actually introduce The Lone Ranger to a completely new audience.

2)The Batman and Ghost/Dark Horse - 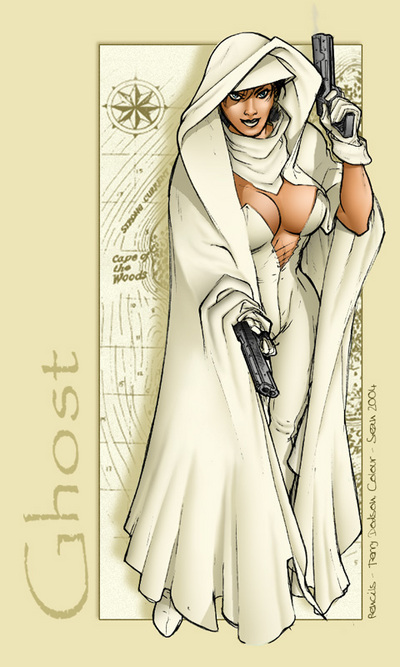 Along with X, she is probably one of my favorite characters from the weekly Comics Greatest World series. The best part was that each one was only a buck! Can't beat that! The cool thing about Ghost was the mystery that surrounded her. The mystery of her background and origins was left pretty much intact for her first thirty-six issues. After a break, she was back, and her past was revealed. Ghost DID come close to a Batman team up. She was part of a four-issue team-up with Barbara Gordon and the Cassandra Cain Batgirl.

If that one isn't possible then, maybe ~

Not one of my favorite characters - but not one of my least favorite characters - from the same Comics Greatest World series. This would work because of the "Fishnets" rule. The Batman has a thing for fishnets. As in fishnet stockings. During his training to become The Dark Knight, legend has it that Bruce trained with Zatara, The Magician, who's daughter, Zatanna - who became a talented magician in her own right. Zatanna and Bruce have a history. He also has a history with Green Arrow's girl, Black Canary. Both wear fishnets. Not the worst reason in the world for a hook-up - I mean, team-up.

1)The Batman and The Thing/Marvel - 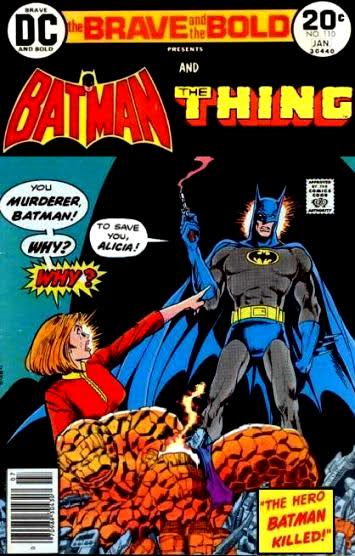 Ben Grimm is probably the ONE Marvel character that The Batman has NOT teamed-up with - yet. He's teamed-up with The Hulk, Spider-Man, Dardevil; and, in DC/Marvel All Access, he teamed up with Dr. Strange. If we play "The Six Degrees of Kevin Bacon", The Batman knows The Thing through Superman's team-up with the Fantastic Four. It would be so cool to see The Batman and The Thing teamed-up against Poison Ivy and the Puppet Master. Or teamed-up against a cadre like The Moleman, Namor, Lex Luthor, Norman Osborn and Dr. Doom, all working for Ra's Al Ghul. Or, maybe just someone like The Bookworm.

These are my Top 5 (plus) Cool Batman Team-Ups. Is there A character or A team that has you would like to see The Dark Knight work with that has not happened yet?