Amounting to the best non-holiday February weekend of all time, all newcomers and the majority of holdovers fared amazingly well, continuing the over-performing trend that has made the first two months of 2012 look more like summer.

Winning a narrow but heart-pounding victory was the Channing Tatum/Rachel McAdams romantic comedy The Vow, which left a trail of mascara-smeared woman in its wake, collecting $41.2 million over three days. The bow for this Nicolas Sparks-esque tale is the best ever for a romantic drama (I don’t count Pearl Harbor) and sure-handedly proved that in the right vehicle, Tatum and McAdams are stars to recon with. With Valentine's Day approaching, expect strong weekday grosses and a sizeable final take.

Close behind was spy thriller Safe House, which gave star Denzel Washington his second-best opening weekend ever with $40.2 million, trailing just 2007’s American Gangster (in which the veteran also portrayed a villain). Adding well-liked up-and-comer Ryan Reynolds to the mix, as well as a powerful marketing campaign, Universal made this out to be a must-see battle of wits. Considering the R-rating and other action offerings still available, this is an impressive result to be sure.

Also shredding expectations in third was The Rock-starrer Journey 2: The Mysterious Island. Originally projected to land in fourth, the 3D, pseudo-sequel exploded 94 percent from Friday to Sunday and ended the weekend with an excellent $27.3 million. On any weekend last year, this would have been a clear-cut number one debut. Eclipsing the $21.1 million start of 2008’s Journey to the Center of the Earth (one of the first 3D movies of the new age) it should also wind up with more, and has already collected $102.0 million worldwide.

Slumming it (not) in fourth was the 3D re-release of Star Wars: Episode I - The Phantom Menace, which felt the force and blasted off with $22.5 million. That brought the total domestic take to $454.1 million, meaning it rose two spots on the all-time domestic list to number five. It should soon eclipse the original Star Wars for the number four slot, that is until Lucas releases the original film in 3D three years from now. 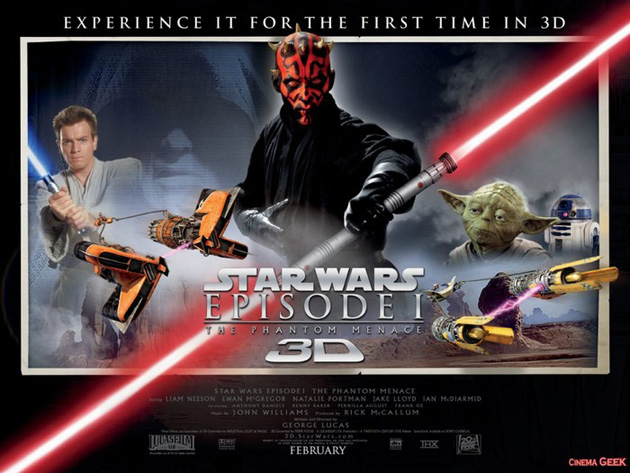 Notable holdovers include a relatively scant 45-percent dip for found-footage action film Chronicle, a fall of 52 percent for The Woman in Black (a great hold for a horror flick with so many new offerings) and tiny dips for awards hopefuls The Descendants and The Artist.

Three more films parade into theaters next week, lead by the long-overdue comic book sequel Ghost Rider: Spirit of Vengeance, which will strike fear into evil in 3,000-plus showings. Romance/action /comedy film This Means War will then target the same demographic as The Vow in 3,100 and foreign animated feature The Secret World of Arrietty will try and charm families on just 1,200 screens.