By: Jeffrey Dy | PS3 Reviews | September 6, 2012
TellTale Games’ Walking Dead series continues moving along with the third episode called Long Road Ahead. If you thought this five episode series is already crazy after the second episode, Starved For Help, then you’re in for a treat as Long Road Ahead is the most story driven and emotional entry yet. As Lee Everett, Clementine, and company continue their struggle of survival in the Walker apocalypse at Georgia, the events that take place in this episode changes the complexity of the series as a whole. It is filled with moments I didn’t see coming and will be talked about with fans for a long while. It is also the most action packed episode yet with more Walker encounters and puzzles to solve.

Long Road Ahead begins at the motor inn where the group has been staying since the end of the first episode. The struggle of power for leadership still remains stressful between Kenny and Lily. Lee and Kenny start the episode hunting for supplies at the shop they stayed in for a duration of the first episode, but come across a female survivor being attacked by Walkers. Lee unfortunately has to make another tough decision of saving the survivor at the cost of getting more supplies and vice versa. Emotions flare up especially with this episode’s biggest moments, which are arguably the most emotional scenes I ever seen in a videogame. The bandits that were introduced last episode are not happy some of their supplies were taken and decide to invade the motor inn. It is up to Lee and the rest of the group to get out of the mess along with finding an effective way to get to Savannah. 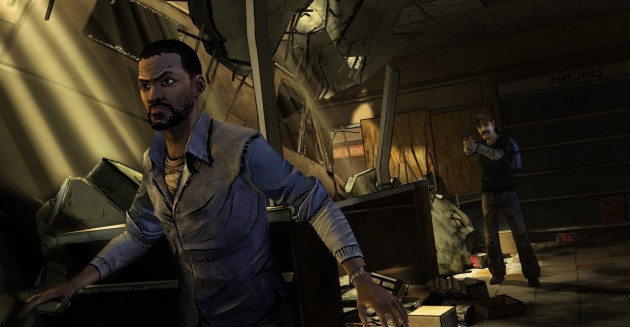 While the core gameplay remains the same for the whole Walking Dead series so far, there are more action-heavy sections in Long Road Ahead. One section involves shooting bandits and Walkers with a sniper rifle. The controls are simple to mow down enemies, but you’ll be shooting without a reticle as an assist. It can be a bit hard to tell if your shots kill the enemies at first without a reticle, but if you’re able to aim correctly at them, you’ll be fine. Other than the shooting and close combat sections against Walkers, there are also more puzzle sections in this third episode as well. These puzzle sections remain intact from the first two episodes of finding certain objects to proceed with the story.

The only disappointing aspect of TellTale’s Walking Dead series has been the numerous technical issues. The game still looks great in its comic-book art style, but Long Road Ahead is the worst of the three in regards to the technical issues. Besides the frame drops and loading when scenes transition from one to the next, complete objects and characters disappear in certain scenes. This results in some cutscenes looking more awkward with one character hugging nothing than a person as an example. In addition, one character’s animation was stuck in one of my playthroughs resulting in another awkward looking cutscene. The game was even stuck in a weird camera angle after one cutscene to the point I couldn’t continue and I had to reload my last save. I keep hoping that TellTale fixes these problems for these episodes, but I don’t see it happening considering the schedule they release them.

Despite the worst technical issues in the series yet, The Walking Dead Episode 3: Long Road Ahead is arguably the best story-based game I played this year. While the storyline continues the adventures of Lee, Clementine, and the rest of the group amazingly well, this episode is filled with the series’ most emotional moments yet. These emotional moments I wish I can spoil are up there for my favorite gaming moments this year and they are as good as most television shows today. The action also picked up a notch in Long Road Ahead with more combat sections involving shooting and close combat against Walkers. The cast of characters also remain amazing with Lee and Clementine’s father and daughter-like relationship continuing to evolve along with the supporting cast you love and hate as you play through the game. The attachment to these characters I mentioned in the Episode 2 review remain intact as well. I can not wait for what is next Lee, Clementine, and company in the The Walking Dead’s final two episodes in the upcoming months.