The Walking Dead – This Sorrowful Life Review: Tears for Fears

Pardon me while I wipe the tears from my eyes after that closing scene with the Dixon brothers. Even though this episode was mostly quiet, save for little bursts of action, I was moved to tears on three separate occasions. At this point, I can guarantee next week’s season finale will leave me an emotional wreck. But before we can get to that, let’s talk episode 15.

The Glenn-Maggie pairing has always felt natural. They have an ease about their relationship that's refreshing to see amidst the fighting and killing, and despite a brief blow-up after the Governor’s terrorizing ways, they’ve come out of it a stronger duo. And yes, let’s not forget the bow chicka bow wow in the love garage. For a couple like this, marriage feels like the next logical step. Of course, this is the zombie apocalypse we’re talking about. Does marriage even have a place in a world where there are so many other things to worry about? Regardless, like any proper gentleman, Glenn asks Hershel for Maggie’s hand in marriage, which he gives without hesitation. Glenn’s reason for wanting to marry Maggie is simple and underscores the idea of living every moment like it’s their last: “I want her to know before… who knows.”

Because going to Tiffany’s for a ring isn’t an option, Glenn makes the best of his situation and pulls off a walker’s ring, along with her finger. (Side note: props to Glenn for picking a lovely diamond ring for his bride-to-be!) As for the proposal, he doesn’t make it a spectacle (no lip-dubs or Jumbotrons necessary), and he doesn’t even get down on one knee. It’s very sweet and understated, as he quietly places the ring in Maggie’s hand, and she says yes immediately. They know the impending war with Woodbury could have dire consequences for their group, but their marriage, whether there’s an actual wedding or not, is symbolic of everything they have been through and the love that they share. It’s nice to see them have this happy moment together, one which would be a milestone in today’s standards, but seemingly carries even more weight at world’s end because their time is so tenuous. Glenn and Maggie forever.
Crying level: a bathtub of tears.

Rick, Rick, Rick. I knew he couldn’t sacrifice Michonne. And it’s not that he doesn’t have the spine. It takes even more guts to not take the “easy way out” and screw Michonne over. It’s just not what their group does, a sentiment echoed by both Hershel and Daryl. After waffling over the decision for several days, the sight of a pregnant Lori finally convinces Rick that they cannot give Michonne up to the Governor. Lori tends to show up when Rick has a crisis of conscience, and it’s not a stretch to think of her as a constant reminder of everyone he still has to live for. Even though she’s gone, Carl, Judith, and the rest of his pseudo-family need him to step up and be a leader. Of course, Merle takes it upon himself to take Michonne to the Governor himself because he sensed that Rick wouldn’t be able to go through with it, but we’ll get more into that in a bit.

Rick has had his fair share of problems this season, but after that run to King County a few episodes back, it seemed like the old Rick was back to take the helm. And after the Coach Taylor (of Friday Night Lights) level speech he delivers when telling the group about the deal for Michonne, I couldn’t stop pumping my fist in the air while simultaneously dabbing at my eyes.

It’s too good not to print in full: “I couldn’t sacrifice one of us for the greater good because we are the greater good. We’re the reason we’re still here, not me. This life and death – how you live, how you die – it isn’t up to me. I’m not your Governor. We choose to go. We choose to stay. We stick together. We vote. We can stand, we can fight, or we can go.”

The bit about not being their Governor is particularly telling of what kind of leader he is. Both men were thrust into a position of leadership because of uncontrollable circumstances, but Rick took the high road, choosing to work together and give his people the chance to voice their opinions instead of scaring them into submission with empty promises. I’ve always believed in you, Rick.
Crying level: a river of tears. I knew from the moment this episode started that Merle was not long for this world. After Rick ropes him into the inner circle regarding the Michonne plan, he takes matters into his own hand(s) and lures her down into the tombs, whacking her upside the head and tying her up. He’s right about Rick backing off, but he must have known that taking her would be a suicide mission. In any case, Merle leads Michonne, who’s tied up and without her katana, toward the feed store where they’re supposed to meet the Governor at noon. It’s a strange duo, to be sure, but I’m surprised she doesn’t make any attempts to escape his clutches. She speaks to Merle in an eerily calm voice, seemingly trying to assess what he’s thinking, and she even manages to make a few snide comments as they walk along the road. He admits that he hopes by pulling off this stunt, he’ll win everyone’s favor and be able to stay in the prison, and it’s weirdly sweet that he’s trying for his brother’s sake.

Eventually, they come upon a motel, and he manages to hotwire a car, although not without a close call with a few walkers thanks to an unruly car alarm drawing them in like a beacon. Michonne, still tied to a post, does a fine job stomping in a walker’s head and cutting another’s off with her binding. She’s had a lot of fun kills this season, but I digress. They both get into the car for the world’s most awkward car ride ever. Michonne tries to get under Merle’s skin by talking about Daryl’s place in his new family as Rick’s number 2 and the fact that he’s ruining his one shot to have a new beginning with them by choosing to stay on the outside. And of course, the dagger: “No one’s going to mourn you, not even Daryl.” She ultimately softens, saying they can both go back to the prison, but Merle has made his decision. Perhaps because he didn’t protect Daryl when they were kids, this is his way to make it up to him. Try as he might to integrate himself into the group, I think he realized that trying to kill the Governor on his own is how he can best serve the group’s interests. It’s stupidly noble of him, but that’s the kind of guy Merle is. 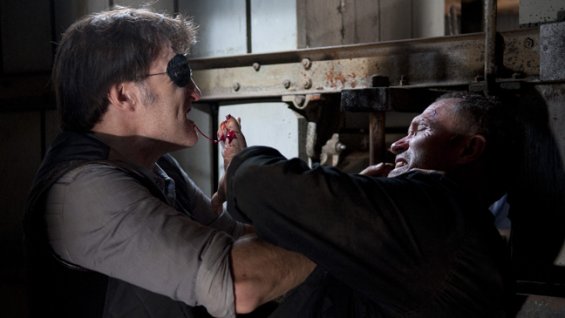 It’s too good not to print in full: “I couldn’t sacrifice one of us for the greater good because we are the greater good. We’re the reason we’re still here, not me. This life and death – how you live, how you die – it isn’t up to me. I’m not your Governor. We choose to go. We choose to stay. We stick together. We vote. We can stand, we can fight, or we can go.”

After letting Michonne out by the side of the road, he enjoys happy hour with a bottle of whiskey and proceeds to lure dozens of walkers with the music spilling out of his car. He drives over to the meeting area and abandons ship as the car rolls over to where the Woodbury folks are waiting with guns drawn. He heads into a building where he can shoot at the Woodburians as they shoot at the walkers. Unfortunately, just as he has the Governor in his sights, a walker attacks. The Governor catches him, and yikes, it’s rough times ahead for Merle. We’ve seen the Governor act in a calculated manner (see: the cringe-inducing scene with Maggie or last week’s cat and mouse game with Andrea), but I don’t recall ever seeing him this violent. He rails on Merle, and he pulls a Mike Tyson but instead of an ear, he bites off a few fingers. But that wasn’t the worst of it. Showing just what a psychopath he is, the Governor shoots Merle but not enough to kill him dead.

As Daryl comes onto the scene, Norman Reedus knocks it out of the park with the emotion he displays on his face as he looks into the vacant eyes that no longer belong to his brother. There’s no question that he loves Merle dearly, and having to see him like this, when he did everything he could to include him in the prison group, must feel terrible. He pushes Merle away, prolonging the inevitable, but he finally puts an end to Merle’s walker life and stabs him numerous times in the neck and head. He’s an uncontrollable mess, as one should be after having to kill someone you love.

The Dixons have always had a complicated relationship, and while it would have been nice to see them work it out, I think Daryl is better off without his brother. Of course, he should take some time to mourn, but they’ve all suffered significant losses. If I know anything about Daryl, he’ll use this to fuel him to take on the Governor.
Crying level: an ocean of tears

Like I said, the finale is going to destroy me. Are you ready for the war against Woodbury?

Notes and Quotes
-- R.I.P. Merle. You will be missed, from your incredibly blatant racism to your penchant for whiskey and random drug searches in disgusting old mattresses. And of course, you can’t forget his hilarious lines! Two of my favorites from this episode: “You’re cold as ice, Officer Friendly.” and “You’ve got to play the hand you’re dealt. I’ve only got one.”
-- The scene between Merle and Carol was a nice moment. We get a brief mention of how she has gone from being scared of her husband’s shadow to not being scared of anything. He calls her a late bloomer, and she throws the description right back at him. Also, after asking him multiple times if he’s on their side, he says he’s on his brother’s side. So if we’re talking the transitive property, since Daryl is on their side, was Merle on their side, too? Despite his reckless behavior, I think we can assume he had a change of heart.
-- Daryl: “Can’t do things without people anymore, man.” Daryl speaks the party line better than most, but how will he deal with Merle’s death? During their last conversation, Daryl says that he just wants his brother back, but now he won’t get the chance to try and make it work. Will he shut everyone out, or will he accept it and continue to help the group?