Even with its beefy debut last weekend and the arrival of four new films, romantic comedy Think Like a Man easily held on to the top spot, a week before The Avengers will storm the box office.

After doubling opening-frame projections last weekend, Think Like a Man fell by less than a half and upped its impressive two-week total to $60.5 million. With no other female-geared fare set to debut until May 18, a $100-million final tally could result. Not bad for a movie that only cost $12 million to produce. 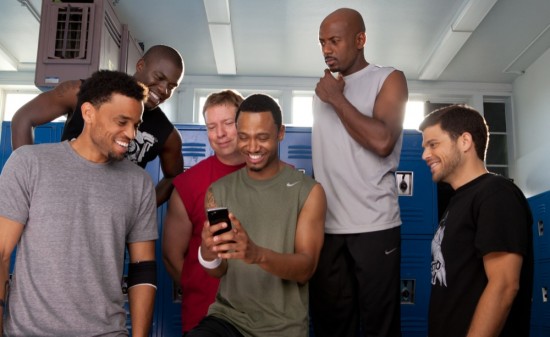 Plundering its way into a notable second-place start, Aardman Animations' The Pirates! Band of Misfits sailed off with $11.1 million in booty. Way off from the opening weekends of most animated films (and even the lowest from Aardman), for a dumping ground weekend things could have been worse. Anticipate some solid legs throughout May.

Upping its position to number 17 on the all-time domestic chart, The Hunger Games has now amassed an eye-popping $372 million and is now roughly $6 million ahead of Harry Potter and the Deathly Hallows: Part II through the same period. As of right now, a $400-million finish looks likely, but all eyes will be on how it performs after The Avengers hits.

In fourth, falling by a little over 50 percent, Zach Efron weepy The Lucky One upped its total to $39.4 million which should put its final tally way off from $80-million-plus hits The Notebook and Dear John, but right in the sweet spot for most Nicholas Sparks adaptations.

The remaining three new releases all opened rather dismally, led by the disappointing fifth-place debut of Jason Segel’s The Five-Year Engagement, which made just $10.6 million. This was way off from director Nicolas Stoller’s previous efforts Forgetting Sarah Marshall and Get Him to the Greek.

Gothic horror flick The Raven and Jason Statham actioner Safe both posted a $7-plus-million start, which was generally in line with the modest expectations they carried. Watch these two fade quickly.

Next weekend it’s the official start of the summer movie season with the debut of The Avengers, which assembles in 4,000-plus theaters. The Marvel madhouse has already hoarded $178.4 million overseas since its Wednesday debut and will end up as one of the year’s biggest smash hits.