"An adrenaline rush unlike any other game in recent memory"
By: Jeffrey Dy | PC Reviews - PS4 Reviews | October 24, 2016
Much like competitive sports, video games can get your adrenaline pumping. Whether you're surviving a tough wave in a survival mode, getting a clutch comeback in a fighting game or beating a speedrun world record by seconds, that rush is there. However there hasn't been many games I experienced where an entirety of them feel like a real adrenaline rush. Drool's Thumper is now one of those games. Developed by former Harmonix guys, Thumper is not your ordinary rhythm game. Many coin it as "rhythm violence" and boy it does live to that title. Amp that up with PlayStation VR and you got yourself one of the most intense gaming experiences in a long time. 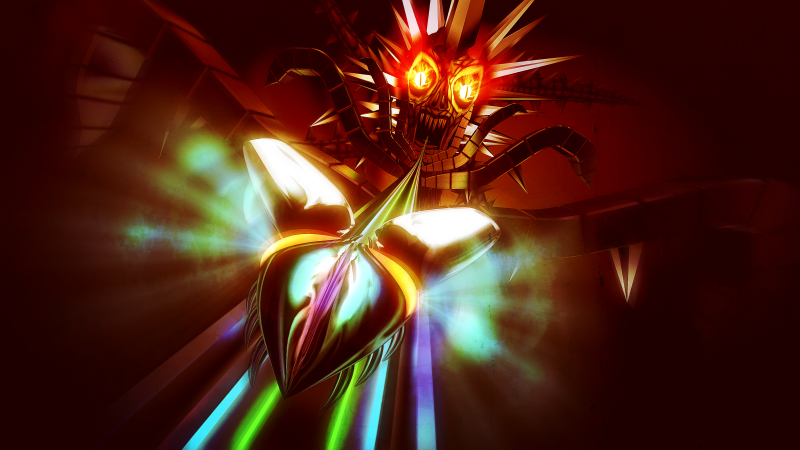 Thumper lets you play as a space beetle on a track literally to hell hitting notes along the way. It is rhythm action unlike any other game in the genre where the pace is blistering fast nonstop. In other words, it's a rhythm roller coaster full of twists and turns. There's also bosses to defeat in the nine stages that last around ten to fifteen minutes each. After surviving a tough and intense sub-level, you breathe a sigh of relief, but the action keeps on going. Sure there's some breaks to the pacing to get you ready for the next section and Thumper does an awesome job of doing that. This game tests your reactions hitting every note because even one small mistake can mess up your timing for the rest of a section mentally. While the first three levels that teach you the mechanics, Thumper gets more real at around stage four. After dealing with simple button taps, holds and turns, the gameplay amps up with the addition of multiple tracks. The beetle can afford a hit if you mess up a button hold or turn. Armor can be gained back by completing a section or killing foes. Missing a button tap loses your combo multiplier affecting your ranking. It is definitively one of those games that is easy to learn but hard to master. Just surviving the later stages alone is an exhilarating feeling I often don't get from other games. Getting a S rank on a whole stage here however is one of the most satisfying things you'll ever achieve in gaming this year. Perfect turns become a necessity to grab bonus rings essential for the highest ranking.

How does PlayStation VR factor into playing Thumper compared to playing it normally on PS4 or PC? From the gameplay side, not so much because the game mostly plays the same. Being immersed in the game world in VR however is the big difference. Playing the whole game in VR felt amazing playing a couple levels at a time. I surprisingly didn't want to power through it compared to Rez Infinite. When I tried it without VR however, I missed notes I normally didn't miss due to the limited draw distance. I was too accustomed to the VR reaction timing because of the bigger world personally. Plus having headphones on adds along to the intensity of the entire VR experience. Thumper's visuals are quite surreal. It's like you're in a hellish Tron atmosphere banging into the synthetic and percussion-heavy beats. The title screen alone is arguably the best title screen you'll see this year. All of this also runs at a consistent framerate with or without VR. I'm curious to see how the game fares on other VR headsets for the PC assuming support is coming soon since PlayStation VR support is timed exclusive. The percussion-heavy soundtrack does get a bit repetitive, but I'm still fine with Drool sticking to a musical theme throughout the journey than trying to diversify the sounds for the sake of variety. 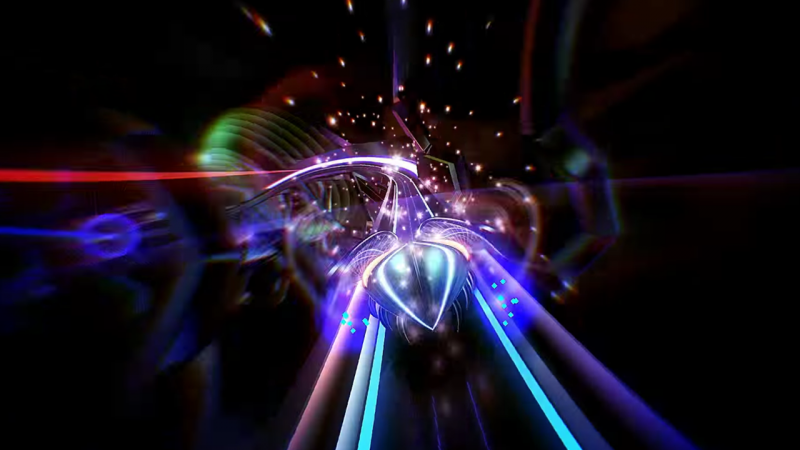 It's been tough to make a rhythm game stand out because of how much Guitar Hero, Just Dance and Rock Band were implanted as the blueprint for the genre. Drool's Thumper show that rhythm games can mean more than just playing or dancing into your favorite songs. Thumper makes "rhythm violence" not only intense but also fast, atmospheric and original. Playing with PlayStation VR makes the experience more special. You're zoned out on the task at hand or either surviving or perfecting this highway to hell. For $19.99, Drool has a big hit in their hands now with Thumper and it's one game you can't miss with or without VR.
Rating
9.5
Pros