"One Last Ride... Right Tony?"
By: Jeffrey Dy | PS3 Reviews - PS4 Reviews - Xbox 360 Reviews - Xbox One Reviews | October 4, 2015
When the intro video for Tony Hawk's Pro Skater 5 played, I got giddy seeing skaters that reminded me of the series' glory days and skateboarding at it's peak popularity. It's a newer and younger generation these days yet I recognized some of the guys that I seen from the past decade.
Then I started playing and everything with downhill from there.
For Tony Hawk, Activision, Robomodo & Disruptive Games to call this Tony Hawk's Pro Skater 5 comes with lots of expectations. Does this long awaited sequel live up to the namesake and also rekindle the franchise back not only to veterans nostalgic for more, but also the new generation of players following the current skateboarding scene? The answer is a big fat no.

Out of the gate, this sequel are misleading in a variety of ways. Tony Hawk's Pro Skater 5 is always online with up to 20 players online skating in a match at one of seven levels, so there is technically no single player unless you start up a private match if you don't want other players hanging out skating. Missions can be accessed from the touchpad's menu or actually skating to them, but the latter method tends to not work often as it should in public games. The levels were designed with the online notion in mind being big and spacious to accommodate 20 players. At the end of the day, this approach seems nice on paper trying to replicate the real life feel of multiple people at a skatepark, but it doesn't work as it intended to be in the game. I'll get more into the online play later on.
The next big misleading thing is how to choose your skater. When you pick "play" on the game's main menu, you pick one of the seven levels, your created parks, or others' created parks and then you boot up the level itself without picking your skater. You have to go to "customize skater" to actually pick your skater, whether it's one of the pros or a created skater within one of the pros. Created skaters don't have their own slots as they are treated as another skin for a pro skater with the same move list. Speaking of the move list, you can't customize tricks like in past games especially special ones since those underwent changes I'll talk about in a bit. That is one of many no-nos the developers didn't keep faithful to the franchise. Out of the pro skater lineup, I only recognized about half of the roster from of course Tony Hawk himself, his son Riley, Nyjah Houston, Chris Cole and Andrew Reynolds, but the fresh faces getting their series debuts are fine additions giving their chance of the spotlight. Then there's also Lil' Wayne as the celebrity addition and yes he does skate a bit for reals, so I don't mind his inclusion. Despite that, picking skaters didn't need to be as confusing as it should yet Robomodo found a way to make that the case. 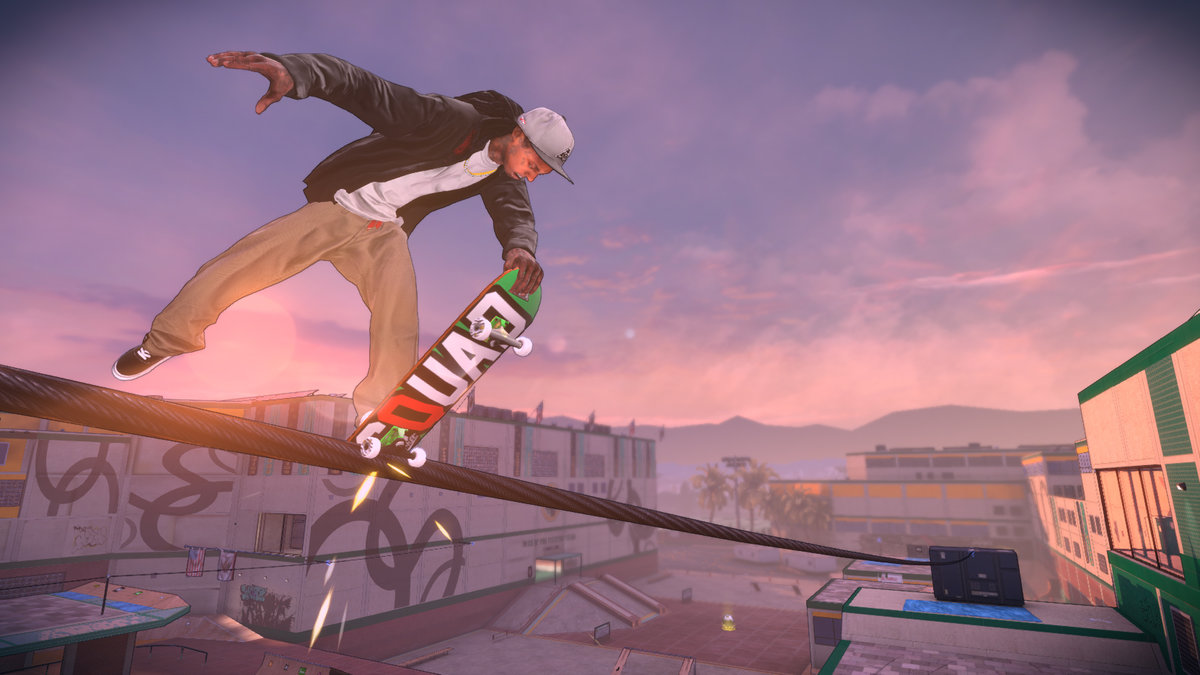 The numbered Tony Hawk sequels always introduced a big gameplay mechanic into the skateboarding fold with 2 debuting manuals, 3 with reverts and 4 with spine transfers. There's some big gameplay changes for Tony Hawk's Pro Skater 5 and all of them are for the worse. When I played the Berrics level, there was no rust with me executing long combos for six to seven digits with manuals and reverts. However the new slam mechanic became more of an annoyance to the point it became a game changer for the wrong reason. You slam by holding triangle after an ollie for a quick drop to the ground. The thing is that triangle is also the grind button as it always has been throughout the traditional series. This change completely affected my muscle memory and I would miss spots I usually would grind because I slammed quickly to the ground instead. It's definitely frustrating when it costed me missions forcing me to retry especially in this sequel's later levels.
Another big change is with special tricks. Once your special meter builds up fully, you have to activate it manually by pressing L1. The special system is simplified to where there's no crazy button prompt to execute them as normal flips, grabs, grinds, manuals and lip tricks are replaced with their special versions. Then again, Tony Hawk's signature 900 is still right, down + grab, but that was the only special trick I noticed that didn't get changed in notation. When the special meter runs out, you can't do specials anymore and the combo needs to be finished without bailing to get it refilled. No more ridiculous high scores as seen in previous games, but you can still get a million plus easy if you know your lines at the levels well enough. The special trick changes were something I didn't mind, but just like the slam mechanic, it took some runs to adjust to them.
Other gameplay changes in Tony Hawk's Pro Skater 5 are fairly minor compared to the two I mentioned above such as wallrides being executed by just an ollie alongside a wall than grinding with triangle. Double/triple kickflips/heelflips are special tricks, so they're not done by pressing the flip trick button multiple tricks after a certain direction. Also, you can't transfer easily between grinds and flatland tricks compared to previous games as well. While they kept the core fundamentals for the Tony Hawk series intact, Robomodo's big changes to the formula do make things worse than better for players, especially series vets as if they did change it for the sake of wanting change.

The level and mission design are also lackluster and arguably the worst in the franchise. Newer levels keep getting worse in design as I kept unlocking them. Sure, School III and The Bunker are spiritual successors to THPS2's School II and the original's Warehouse, but I wasn't impressed at the other levels in THPS5 where earlier games in the series had iconic levels that later games couldn't replicate. Each level also their own special gimmick as well from the beach having your board be on fire, becoming giant at the Mega Park, being able to double ollie at the rooftops and gravity at the space station. Some of the gimmicks are however more of a liability in certain situations especially not hanging on to a rail at the space station with gravity on and not timing your double ollies at the rooftops well falling into a bottomless pit (still a big no-no personally in these games!).
Missions in Tony Hawk's Pro Skater 5 suffer due to a lack of variety. While there's free skate objectives such as finding the "skate" and "combo" letters, smashing objects and finding the secret VHS/DVD, the actual missions that you need to get stars to unlock the later levels are repetitive in design. There's the obligatory high score and big head missions along with other ones such as collecting a certain amount of objects and then taking them to another spot, racing through a line of rings and grinding/manualing for a long period of time for amateur/pro/sick ratings. Getting at least pro ratings earns stat points for skaters and just like past games, it's not universal for every skater. The mission variety did have repetition throughout the series, but they were able to mix things up from time to time compared to what we got in THPS5.

Create-A-Park returns with players making their own levels with the templates provided by the developer-made levels. This mode is always nice to have, but still nothing special many games later. These parks can be uploaded online for others to play and be rated on. However, these user-made levels are where the game's lack of polish gets demonstrated. From objects flickering in and out, being out of bounds and still moving normally and the physics not working intentionally, that's not all with THPS5's technical issues.
I talked earlier about how this Tony Hawk sequel is always online with a maximum of 20 players skating around at a level, but it's up to players themselves to initiate the competition starting up games against each other. While series staples trick attack and combo mambo are some of the selectable modes, there's no horse and graffiti in this new sequel, which is supremely disappointing. In my time with the online play, I only seen a few players at once playing a trick attack game, but expecting a full lobby for any of the modes is rare. I know basic lobbies and matchmaking are the boring routes to take with online play this console generation, but trying something like this is still not gonna get players to start up online games with ease.

The frustrations don't end on the gameplay and online structure because Tony Hawk's Pro Skater 5 is one big technical mess from top to bottom. The numerous load times interrupt the overall flow of gameplay. For example, I start a mission from a public game and then it loads up the same level with just me alone. After I beat the mission, I stay in the level for a few more seconds and another load time comes and I'm back to freeskate with other players. For a franchise that was known for quick restarts back in the day, seeing these load times is just awful. However, that's not the sad part of all of this. Ever since the game was announced, the graphics felt outdated when we first saw it in action and that is indeed the case for the final version. It definitely looks like a last gen game even though the PS2/original Xbox comparisons is a little too harsh.
For the numerous hours I had with THPS5, I wondered how did this game get past QA and certification with the performance issues. The framerate is all over the place not being stable at 60 fps the majority of the time, sometimes even single digits in some cases. Characters keep spazzing out after a bail as if they're having a seizure. In addition, they disappear off the screen almost completely depending on the bail especially if you've been seeing the numerous glitch images and videos on the interwebs. I already mentioned the bugs with created parks, but with all that said, there's nothing that consistently crashes the game at least. The soundtrack is okay with some standout songs from certain artists, but still not as memorable as the earlier games in the franchise.

You would think for the last year of the long contract with Activision, Tony Hawk and Robomodo would like to go out with a bang with Tony Hawk's Pro Skater 5. What we got instead is a disgrace to a franchise that was once king of the world and the sad, harsh reality that this genre is not getting the comeback it deserves. From the lackluster level design, frustrating changes to the core gameplay and just being a technical mess in every way imaginable, the new Tony Hawk is the worst game I played in quite some time. I bit the $60 bullet preloading the game digitally on Playstation 4 hoping it would be at decent at best, but I had to know for myself how much of a trainwreck it would be and indeed it is. The namesake Tony Hawk's Pro Skater 5 alone means a big deal in modern gaming. Now it's a laughing stock because how rushed it was to store shelves and digital outlets. Don't bite the $60 bullet like I did especially for fans nostalgic for the series.
Hopefully this is one last ride for this series Tony and for me along with some of us here at Entertainment Fuse, that's really sad to say.
Rating
4.0
Pros