By: Jeffrey Dy | PS3 Reviews | September 5, 2012
It was 1999 when skateboarding was at the peak of its popularity; Tony Hawk nails his first 900 at the X Games and the first game of the iconic Tony Hawk’s Pro Skater franchise was released on the Playstation and Nintendo 64. There has not been a traditional game in the franchise in five years with two games by Robomodo featuring a skateboard peripheral trying to fill the void. Fast forward to 2012, where we now have Tony Hawk’s Pro Skater HD, a downloadable HD remake for Xbox Live Arcade and Playstation Network, a return of the traditional gameplay and featuring some of the memorable levels from the first two games. It was timed exclusive on the Xbox 360 for a month because it was on the Summer of Arcade lineup, but it is now finally out on the Playstation 3. While it is a great nostalgia trip, the HD remake has both the good and bad elements of a family reunion. There are some good levels that worth revisiting, but there are others that make you wonder why they are back.

Fans of the original games will march on Tony Hawk’s Pro Skater HD with no rust at all when it comes to nailing lines, combos, and finding the secret items in career mode. Secret tapes, now secret DVDs in this version, are in the same spots they were back in the day with some added in levels that didn’t have them before. Since this is based on the first two games, none of the gameplay features that were added in later games are in this HD version such as reverts, spine transfers, and getting off your board. There were moments I wished they were in, but it was for the best they remained out for purist reasons. The manual was still the biggest mechanic for continuing combos at the time until the revert was included in the third game. The only new mechanic introduced in Pro Skater HD is the big drop, where you have to hold the ollie button when you’re in the air for a long time. Other than that, this is traditional Tony Hawk at its finest with the familiar controls, especially with a Dual Shock controller compared to the 360 controller because of its bad d-pad, but there are things that seem a bit off compared to the original games. 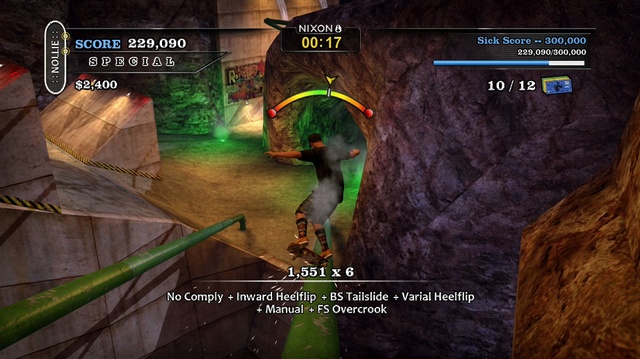 Robomodo is the developer for Tony Hawk’s Pro Skater HD, not the creators of the franchise Neversoft and it shows. It felt like this HD version just didn’t get the love and effort Neversoft would have when they were working on the franchise in the late 90s and early 2000s. The physics and handling are not the same as they used to be, but it is slightly improved when your skater has better stats. The timing on certain tricks also off as I was doing manuals late ending my combos. Plus, the game seemed to recognized my manual inputs after bailing, so I’m at a complete stop with a manual right away. Some of these things may seem nitpicky, but coming from someone who loved the franchise back in its heyday, these will frustrate fans that have been waiting for this traditional style of gameplay to come back.

The level section for this HD version was also another disappointment along with the gameplay issues. While franchise favorites Warehouse, School II, Hangar, and Marseille made it into the game, the point A to B levels from the first game Mall and Downhill Jam are also in too and since they were frustrating levels back in the original, they are still frustrating here. Some levels from Tony Hawk’s Pro Skater 3 will be available as downloadable content in the future with the revert mechanic included, but you can only revert in only those levels when they’re out. The skater roster is mix of old and new skaters, not the exact roster from the first two games, which might be another disappointment for some that wished someone from those games return. While classic skaters like Rodney Mullen, Andrew Reynolds, are Eric Koston are in, newer skaters from the current generation of skateboarding such as Nyjah Houston and Chris Cole join the roster. 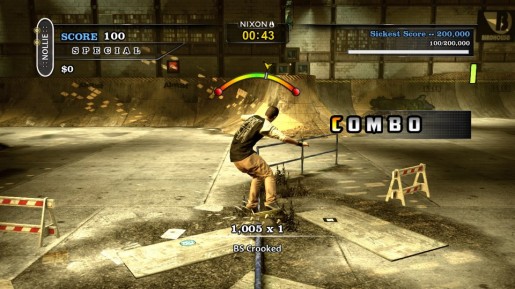 The main career mode is still the same in Tony Hawk’s Pro Skater HD from the original games. You have to complete a certain number goals to unlock the remainder of the levels as only the Warehouse is available when you first boot up the game. From collecting certain objects, meeting a certain score target, and more, this will be deja vu for franchise fans. Cash can also be collected in various spots of the levels to buy stats, tricks, and boards for your chosen skater. Other than free skate and single sessions, new modes are included in this HD release. Hawkman allows you to collect pellets by skating a line performing specific tricks. There’s also big head survival where you have to prevent yourself from your head blowing up by landing big combos to keep your head small. These new modes are not really that special as I would rather stick to the traditional modes, but at least they are in to spice things up if you feel like doing something different.

Another major disappointment in this HD package is the multiplayer options. There is no local multiplayer at all in this game, which is really a shame. With that in mind, there is no horse, one of the favorite and signature modes of the franchise. The online options are also bare bones, but still functional with a maximum of four players in one room skating. The modes available online are trick attack, graffiti, and big head elimination. While trick attack and graffiti remain similar to the originals, big head elimination is the multiplayer version of big head survival as the last man standing with their head intact wins.


While the game looks okay seeing levels from the first two games in HD, numerous technical issues are present and goes along with what I said earlier about Robomodo not showing enough love and effort. Since this was released later on PS3 than on 360, it feels like a rushed port with the framerate only being at 30 frames per second and numerous glitches that I found when I was missing around going off the level for a bit. I’m also not a fan at some of the new animations either. The soundtrack is a mixed bag as well with some old tracks from the first two games returning, but not the ones you wanted. Sure, “Superman” by Goldfinger and “Bring the Noise” by Anthrax and Public Enemy made it in, but there were other songs I would rather than hear than the ones Activision and Robomodo got like Rage Against The Machine’s “Guerilla Radio.” There are new tracks in this HD version, but the soundtrack as a whole is lackluster because there is simply not a lot of songs in the game.

I had big expectations for Tony Hawk’s Pro Skater HD to bring the franchise back on track, but numerous issues and questionable decisions by Robomodo made this package a big disappointment. The traditional combo-heavy gameplay feels fine, but some things about the it feel a bit off than what they used to be in the originals from the handling to timing on certain tricks. While it is still a decent nostalgia trip to revisit some of the franchise’s best levels, I’m not thrilled about some of the levels they decided to bring back, specifically the Mall and Downhill Jam. The lack of local multiplayer is a big shame for those that had memories of playing horse against friends. There are also numerous technical issues that make this PS3 version feel like a rushed port job. For $15 dollars or 1200 Microsoft Points on Xbox Live Arcade especially for franchise fans, is Tony Hawk’s Pro Skater HD worth your time and money? It still is for franchise fans wanting to revisit the late 90s and early 2000s when the franchise was at its peak, but be prepared for disappointment.