If you’re a romantic at heart or, in the case of 2013, an action junkie, it looks like Valentine's Day is A Good Day to Die Hard, the fifth misadventure of hardened cop John McClane which has received its first teaser trailer. Also – ree, ree, ree! – just breaking (in absorbing fashion I might add) is the first trailer for Hitchcock, a biopic of the legendary director starring Anthony Hopkins chronicling his struggles to make the seminal horror masterpiece, Psycho. Also involved in some sordid deeds are Russell Crowe and Mark Wahlberg in Broken City, a political actioner which finds a New York City cop following the wife of the city’s mayor only to uncover a larger conspiracy.

Next, an adaptation of author Donald Westlake’s Parker novels, the aptly titled Parker, finds Jason Statham’s thief (named…Parker!) who is betrayed by his crew and sets off for some much deserved revenge. It’s hard out there for a crook. Last off is the teaser trailer for Rob Zombie’s upcoming twisted horror film The Lords of Salem about a vengeful coven of ancient witches who return in present day . We’re all about magic at Player Affinity – the magic of movies. This is Trailer Tracker. 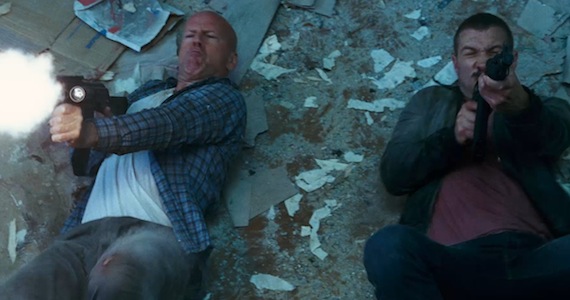 A Good Day to Die Hard

seems like a popular place to set movies these days (gotta please those international crowds) and not even an all-American hero is immune to the draw of lord box office. Yes, now the droll, wise-cracking, ass-kicking cop John McClane is off to to lend some aid to his estranged son Jack (Spartacus: Blood and Sand’s Jai Courtney) and inevitably gets entangled in a terrorist plot. Dude cannot catch a break. Even from the brief trailer (which more or less goes like this: Boom! Blam! Pow, pow, pow!) we do get a distinctly European flavor to the film (bleaker, a tad grittier, ancient architecture) that we’ve not yet seen in this franchise.

The director this round is John Moore who though having far from a neat and tidy track record (he is behind such efforts as Behind Enemy Lines and Max Payne) is an extremely competent action director which is precisely that these films need. The Die Hard franchise ultimately relies on two elements: solidly executed action and Bruce Willis’ wry wit. Execute those two trademarks with some style and it’s difficult to fail outright. Live Free or Die Hard was a pleasantly energizing installment that is just as re-watchable as its predecessors so let’s hope this fifth outing in the surprisingly durable two-decade long franchise doesn’t disappoint.

Parallel to the fame the film Psycho garnered, the struggles director Alfred Hitchcock took to get the film made are equally fascinating. Hitchcock tells that very story, from the strains it puts on his marriage to the professional battles with both and Universal and their continued rejection of the pitch. Anthony Hopkins (in layers of makeup and a sizeable fat suit) inhabits the iconic role, Helen Mirren that of his dutiful wife, Scarlett Johansson as Janet Leigh, Jessica Biel as Vera Miles and James D’Arcy as Anthony Perkins. This type of period/professional struggle/biopic film found huge success last year with My Week with Marilyn and Hitchcock looks equally impressive in every way. This likely awards contender seems to have everything going for it.

Russell Crowe “owns” Mark Wahlberg in , an original thriller property directed by one of the Hughes Brothers (Allen to be specific), half of the duo behind Menace II Society and The Book of Eli. The movie tells a tale of political corruption in . Reminiscent of more sedate of Play and Body of Lies, also adds to the mix Catherine Zeta-Jones, Barry Pepper, Kyle Chandler and Jeffrey Wright, which amounts to strong talent across the board. The trailer seems to be accenting the action, though I would expect this will be the type of film that derives its thrills from character-driven drama and not explosions and excessive gunplay. This is one to keep an eye on.

Jason Statham is back doing what Jason Statham does best: unleashing fiery hell on those who have wronged him. This time it’s Michael Chiklis and his former crew of thieves who have taken Parker’s share of the loot and left him for dead (think Payback), and its up to him and Jennifer Lopez (?) to set them up and take his former colleges for all they’re worth (and kill some people along the way). Hopefully this plays more into heist/con elements than most Statham vehicles and there is a popular book series (of the same name) as well as director Taylor Hackford (The Devil’s Advocate, Ray) to makes things more promising. Statham’s last film Safe was actually extremely entertaining and somewhat of a deviation from his normal shtick. Hopefully that’s the case with Parker even if the trailer suggests otherwise.

Cult crowds came crooning for death metal rocker Rob Zombie’s first two directing efforts House of 1000 Corpses and The Devil’s Rejects and his financially successful  remake of Halloween actually isn’t as bad as many of its detractors claim. Then came Halloween II, an ungodly abortion of a movie that mistook excessive profanity and monotonous carnage for horror. Lords of Salem appears to be a slight change of pace for Zombie, opting to go the supernatural route over that of the grotesque slasher (though his intentionally ugly aesthetic style seems to be alive and well). Early reviews have been expectedly mixed and though a fan of horror and usually a defender of the man as a filmmaker, I’ll need to hold off before I get any kind of excited for Lords of Salem.