Trailer Tracker: Abraham Lincoln: Vampire Hunter, Seeking a Friend for the End of the World

Four score and seven years ago, the 16th president of The United States of America held off the unholy forces of the night in bloody, axe-swinging style (or so the history books say). Wanted director Timur Bekmambetov brings us the adaptation of the novel Abraham Lincoln: Vampire Hunter and we have your first look at the high-concept action flick.

Also bending genres is the romance/disaster film Seeking a Friend for the End of the World starring Steve Carell and Keira Knightly as two neighbors who may become something more in the final weeks of Earth. Next, it’s move aside Matt Damon and hello Jeremy Renner in the unique teaser for quasi-sequel The Bourne Legacy from the writer of the first three films, Tony Gilroy. Finally we have the quirky indie romantic comedy from 2011’s TIFF, Salmon Fishing in the Yemen with Emily Blunt and Ewan McGregor. But who needs a fish-finder when you have a Trailer Tracker – let’s go. 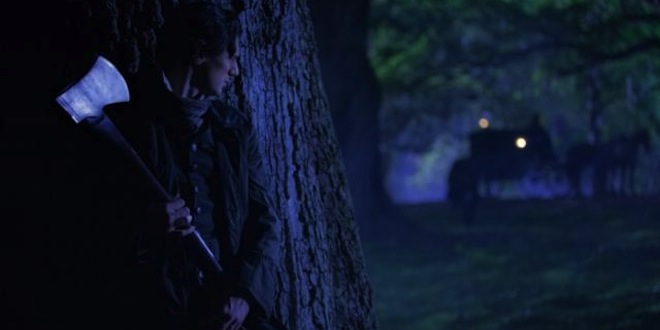 From the novelist that brought us other reality-altering works such as Pride and Prejudice and Zombies, comes the long-awaited adaptation of Abraham Lincoln: Vampire Hunter from the director of Wanted, Timur Bekmambetov. If beheading vampires with an axe was the staple of a prestige film then “Vampire Hunter” would sweep the Oscars (not to mention also promising exploding railway bridges, Civil War battles and a presidential address – uhh, scratch that last one). Fox has been unfurling a strong viral marketing campaign from tongue-in-cheek posters to screen shots and now the trailer. This first look easily (I believe) smooths over the fact that the cast, which includes Benjamin Walker as Honest Abe and Mary Elizabeth Winstead as his doting wife, do not pack star power. Instead, it’s premise, premise, premise.

Even if you are not a fan of Bekmambetov’s over-the-top style of direction, you must admit that this looks like a great deal of fun. While his physics-defying action scenes in previous movies may have made you groan, when we are talking about a presidential slayer of the undead, realism isn’t really what we’re going for. The cast is rounded out with some great supporting players including Rufus Sewell, Dominic Cooper, Anthony Mackie and Alan Tudyk (equally unknown by most theater-goers, but equally excellent nevertheless). Slated for a June 22 release, “Vampire Hunter” will try to overcome its high-concept, fanboy-targeted niche with explosive-laden trailers and (hopefully) solid buzz. And hell, even if it flops at least we can live out the remainder of our lives knowing that a movie titled Abraham Lincoln: Vampire Hunter does in fact exist.

Seeking a Friend for the End of the World

What would you do if a 70-square-mile asteroid named “Matilda” was headed for our planet, set to eradicate life as we know it? Well in Seeking a Friend for the End of the World, the initial plans for Steve Carell are to “catch up on some me time, find God … maybe re-arrange some chairs.” Fortunately for him, Keira Knightly is his next door neighbor and together they go on a journey to find themselves (and possibly each other) as the clock runs down. Adam Brody, William Peterson, Connie Britton and Patton Oswalt also star, in what is essentially a hybrid between a romance, doomsday thriller and raunchy comedy, and the trailer plays to all of those genres brilliantly. This has all the makings of a huge sleeper hit with its likeable leads (Carell has never been more bankable) a funny play on all of its inspiring genres, enticing title and simply a premise unique enough to draw in those who would normally shy away. It will have to compete against our favorite blood-covered leader, however—Abraham Lincoln: Vampire Hunter. Both are out June 22.

After becoming a worldwide smash and propelling Matt Damon onto the A-list, people were understandably up in arms when it was announced that Universal was moving ahead with a fourth installment, but sans Jason Bourne and with new director (and former writer) Tony Gilroy at the helm. “Replaced” by Jeremy Renner as another Treadstone agent on the run (likely enticed to do so after the conspiracy involving the C.I.A. was made public), the powers that be once again must try and track him down before he does more damage. Sporting the clever tagline “there was never just one” and keeping the look and feel of the original trilogy (while focusing on the ass-kicking), this first look has quieted some of its initial detractors. The solo star power of Renner will be tested here, but this looks to be the makings of a solid spy adventure that would make Damon proud, if not jealous.

Salmon Fishing in the Yemen

Not your most mainstream title (and by the look of it) not your most mainstream film, Salmon Fishing in the Yemen tells the quirky story of a sheik in Yemen and his consultant (Emily Blunt) who dreams of bringing the sport of salmon fishing to the Middle East. This understandably grabs the attention of a reporter played by Ewan McGregor, determined to find a unique story amidst the routine bloodshed experienced in the region. From director Lasse Hallström (What’s Eating Gilbert Grape?, The Cider House Rules, Chocolat) this was a much buzzed-about entry at last years Toronto International Film Festival and adding Oscar-winning screenwriter Simon Beaufoy (Slumdog Millionaire) to the mix can’t hurt things. The premise odd and the release likely limited, you’ll have to keep an eye out for this one if your interest is piqued.