Psychic rage returns this week in the world of trailers as we get a first look at the remake of Brian De Palma’s classic horror film Carrie with Chloe Grace Moretz taking on the role of the troubled teen. Then, moving on from playing a troubled teen in The Perks of Being a Wallflower, Logan Lerman reverts back to his blockbuster franchise with Percy Jackson: Sea of Monsters.

Also for horror fans, particularly those in love with high concept fare, is The Purge which puts a new spin on the home invasion flick. Finally (and equally out there) is the red band clip for This is the End, featuring a veritable who’s who of some of today’s biggest comedians. On Entertainment Fuse, however, the fun never ends – this is Trailer Tracker. 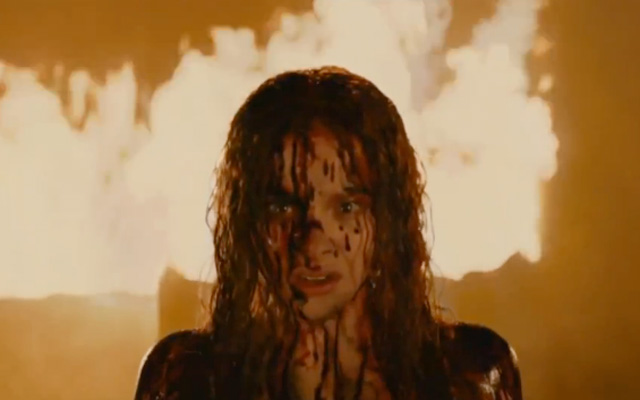 The club of untouched horror classics is a shrinking one to say the least and it won’t be long until all genre trend-setters are dredged up for modern audiences. Next on the list is Carrie from author Stephen King, with Chloe Grace Moretz taking on the role of the titular gifted one and Julianne Moore that of her mother. While the actors in these lead roles seem like an upgrade, retooling this classic is still a pointless endeavour.

That being said the trailer is a pretty slick one, most interestingly not trying to act like everyone doesn’t already know the plot and just goes ahead and shows pieces of the climax and the iconic blood scene. Instead it’s being marketed as just a cool revamp and for that I give a nod. The most promising aspects of this remake have always been the cast and the involvement of director Kimberly Pierce (Boys Don’t Cry) who should be able to bring some angst to the proceedings – something sorely missed in most horror fare featuring teens.

For any moviegoer looking for dark, mature fantasy fare, you’re going to have to look further than Percy Jackson: but if you’re seeking out effects-heavy, big budget fantasy fare for the young adult crowd I’m sure you’ll be in luck. The original, Percy Jackson & the Olympians: The Lightning Thief, was harmless enough though didn’t do too much very interesting with its clash of Greek gods with modern society.

Its sequel looks larger in scope than the first and adds noteworthy new actors including Nathan Fillion and Stanley Tucci as well as more elements from mythology, chiefly the golden fleece from Jason and the Argonauts. However only time will tell if fans of the novels that turned out for the original are still interested or if what is a longer-than-usual hiatus between franchise instalments will make it sink.

We’ve already got one fright-flick remake on today’s rundown so it’s always nice to see attempts at original, high concept horror. Beginning with the framework of a home invasion thriller, we’re then launched to a utopic where crime, poverty, unemployment and everything in between is at its lowest ever. How was this accomplished? The Purge – one day every year where all crimes are exempt from prosecution. But one couple’s decision to help a stranger turns deadly during the most dangerous night in the country.

Ethan Hawke and Game of Thrones’ Lena Heady play the married couple who must protect themselves from a gang of masked intruders who vie for the individual they let into their home. The concept is very cool; from the setup itself to the fact there is a legitimate reason why no help is coming. If The Purge can avoid descending into your run-of-the-mill home invasion flick, it could be something of a treat.

This is the End

A hoard of stars too extensive to name here assemble for This is the End, a dark, apocalyptic comedy from writer-directors Seth Rogen and Evan Goldberg. The very funny red band trailer should give you an ample idea of the starpower (and style of humour) you’re in for, and for the right crowd this should be an ensemble made in heaven…or hell judging by the plot of the film.