Tim Burton fans rejoice! The cult director has two movies coming out in 2012, one of which we've seen a trailer for in the stop-motion animated Frankenweenie, and the other is this week’s featured clip, Dark Shadows, starring frequent muse Johnny Depp. From fellow niche director Bobcat Goldthwait comes dark satire God Bless America about a man who goes on a rampage after being fed up with society. Next, out of pure brain-melting awe/confusion we bring to you the latest trailer from Peter Berg’s Battleship, which, believe it or not, blows up even more stuff than the previous clips. Last up is indie flick Meeting Evil with Samuel L. Jackson and Luke Wilson about a mysterious man who drags a family man into a world of violence. All we pull you into is a world of cinematic awesomeness – it’s Trailer Tracker. 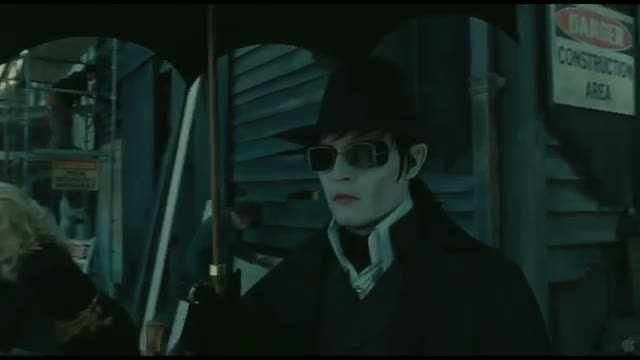 Months before Tim Burton’s stop-motion film Frankenweenie is given life in multiplexes, the director brings us his comedic spin on gothic American soap opera Dark Shadows, starring his favorite thespian, Johnny Depp. Although it ran from just 1966-1971, Dark Shadows produced 1,225 episodes and was met with considerable acclaim. Much like this weekend's 21 Jump Street (which ironically also starred Johnny Depp), Burton has opted not to be faithful in the least and instead bring us a satirical feature based upon the original series in spirit only. Early word is that this offering will be closer to The Adams Family or Beetlejuice than say a Sleepy Hollow, and this clip, which debuted on Ellen, promises just that.

Cursed by a witch (Eva Green) centuries earlier to a life of the undead, former wealthy playboy Barnabas Collins (Depp) awakens in the 1970s and ventures to his family home, which is now inhabited by his direct descendents (Michel Pfeiffer, Jonny Lee Miller and Chloe Grace Moretz among others). There, he plays a role in sorting out their personal issues while growing accustomed to a very different way of life. At its simplest, Dark Shadows is a fish-out-of-water tale with a Burton twist, but frankly the trailer promises something far edgier and outright funny. Depp has had many opportunities to do comedy (albeit by submitting to oddball outfits and adapt bizarre personas), but this seems to be the closest he as come to straight comedy. Whatever the outcome, this first look has me very excited and could very well be my most anticipated Burton outing to date.

As the trailers on YouTube are being frequently pulled, if all else fails check it out on iTunes at http://trailers.apple.com/trailers/wb/darkshadows/.

What would you say to a film by cult director Bobcat Goldthwait that calls to mind Super crossed with Bonnie and Clyde with a dash of American Dreamz and a hearty dose of every Jersey Shore  or Kardashian-style entity out there? I like to avoid mashing exampes of similar films together to describe a movie, but what God Bless America seems to promise is too tantalizing not to envision in these terms. Don’t let the title throw you: God Bless America is not some rah-rah patriotic endeavor, but rather quite the opposite. It is instead a black comedy about a man (Joel Murray) who is diagnosed with a brain tumor who opts to go on a killing spree. He is eventually accompanied by a teenager (Tara Lynn Barr), and they target those who they feel represent the worst of modern society. The premise is rather repugnant at a baser level, but the trailer is hilarious and looks to offer plenty of sharp, dark satire. “God Bless” will land in limited release Apr.l 6.

Over the years we have seen countless movies about mysterious men who offer help but then turn out to be insidious in their intentions," but hell, when Samuel L. Jackson is that person, you’re bound to listen. In Meeting Evil, Luke Wilson’s John enlists the help of a charming individual (Jackson) who promises to help to sure him with his personal “issues.” Things spiral out of control, however, as the bodies pile up and John fears for his family – the thing he wanted to protect from the outset. There is nothing revolutionary promised in Meeting Evil, but Jackson is always a commanding presence, and as long as things don’t get absolutely ridiculous, this indie offering may have a place for a weekend rental.