Trailer Tracker: Despicable Me 2, A Haunted House and More

Halloween may have come and gone, but the spooky leanings of the holiday appear to be alive and well in the world of movie trailers. In a festively themed teaser, the minions are back for Despicable Me 2, which shows some trouble at the house of Gru. Next, Marlon Wayans takes on the found footage genre in his latest spoof effort, titled A Haunted House.

Next, after having just debuted a teaser trailer, A Good Day to Die Hard has brought us some more footage that shows us a bit more of Jai Courtney’s Jack McClane. We’ll wrap things up with an indie effort called Struck By Lightning, written by and starring Glee’s Chris Colfer as well as the in-everything Rebel Wilson and Mad Men’s Christina Hendricks. Things are about to get electric on Entertainment Fuse – it’s Trailer Tracker. 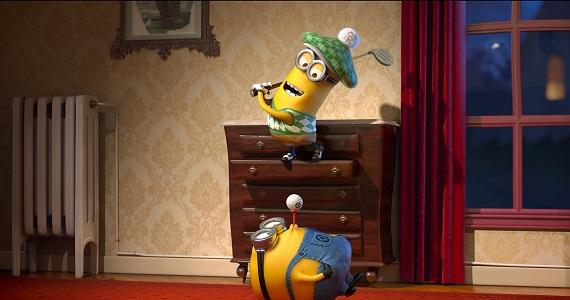 It’s still hard to believe but Illumination Entertainment’s Despicable Me is actually the tenth highest grossing animated movie of all time in and had critical props and widespread audience adoration to go along with its financial muscle. A sequel was no surprise and though set to hit theaters next summer, we have gotten little teasers like this one for the last year or so. Not much of the supervillain Gru, just his adorable yellow minions, who will get their own film in the near future.

Now, in a Halloween-themed teaser, which may or may not hint at some actual events of the sequel, we see the mumbled-mouthed creatures up to their usual antics and getting into some trouble in the process. The plot of Despicable Me 2 has not yet been disclosed but in the teaser we see three minions get abducted by an unknown entity. Could it be another villain looking to hit Steve Carell’s Gru where it hurts? Or is it all just a fun little short film to tide us over until we get a full-length trailer? Regardless of its intentions, it’s a fun little peak back into this world and certainly has me excited to check out the sequel. “DM2” adds Al Pacino and Kristen Wiig and hits theaters June 21.

Just when you thought the Scary Movie-style spoof is dead along comes another whole genre to lampoon: the found footage film. Oh, and Scary Movie 5 is on the way too. Full of groin shots and limp-looking celebrity cameos, Marlon Wayans writes and stars as a man who finds out his house is haunted and blah blah blah. Hilarity doesn’t ensue. The genre this film spoofs was able to rejuvenate horror for the masses (monetarily speaking) so let’s hope A Haunted House doesn’t do the same for spoofs.

A Good Day to Die Hard

There is no hugging in the McClane family, just killing. Such is made rather apparent in the second teaser trailer for A Good Day to Die Hard, which formally introduces us to John’s son Jack — played by Spartacus: Blood and Sand’s Jai Courtney — and their collective troubles in . Other than a glimpse of a returning Mary Elizabeth Winstead as Lucy, the remaining duration of the trailer is filled with the expectedly high quota of explosions and gunplay. At this point, how can we really complain about anything?

Written by Glee’s Chris Colfer when he was 18, Struck By Lightning is your typical coming-of-age story with two distinct twists to the well-treaded genre. Firstly, the central character is telling his story from beyond the grave after being — wait for it — struck by lightning. Secondly the circumstance in which this character “finds himself” is by blackmailing his fellow students to help write content for his literary magazine. A project, he hopes, will get him into a prestigious college. Early buzz has been mixed, with some reviewers praising the earnest nature of the script, but one in particular (I won’t name names) writing a rather scathing (and insensitive for that matter) zero-star review. Manipulative or heart warming? You be the judge.