We’ve got wise guys and un‑wise guys this week on Player Affinity with first looks at Gangster Squad from Zombieland director Reuben Fleischer and comedy The Campaign starring Will Ferrell and Zach Galifianakis.

For those with more of a horror mind about them, the first trailer for The Possession has debuted, brought to us from producer Sam Raimi and starring Jeffery Dean Morgan. Last off, if action, comedy and fright flicks aren’t your thing, well you must then love Bradley Cooper, who stars in The Words. We just can’t keep our mouth shut – it’s Trailer Tracker. 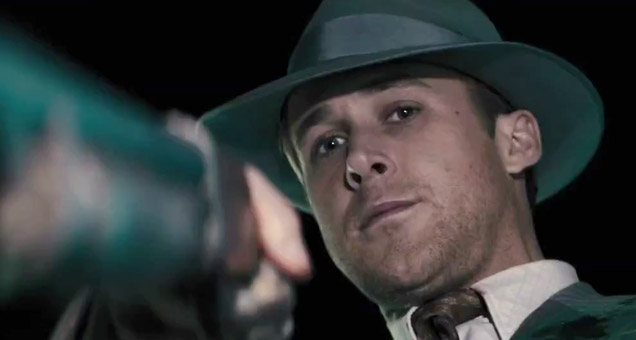 Slow-mo, Tommy Guns and Jay-Z … and Sean Penn, Ryan Gosling and Emma Stone … and lot’s of bloodshed. Interested yet? Well, I was sure pleasantly blown away by the trailer for Gangster Squad, which tosses in all those elements and more in a moody and stylish noir blend. From director Reuben Fleischer (Zombieland, 30 Minutes or Less) Gangster Squad tells the quasi-true story of the L.A.P.D’s off-the-books campaign to rid the city of the East Cost Mafia, led here by a menacing Mickey Cohen (a prosthetic-covered Penn).

I’ve been excited for this effort for some time now and the trailer only serves to ramp up my excitement, which is nearing a fever pitch, so thankfully Warner Bros. moved it from Oct. 12 to Sep. 7. The great cast stretches even longer than the likes of Penn, Gosling and Stone, also grabbing Josh Brolin, Anthony Mackie, Giovanni Ribisi, Robert Patrick, Nick Nolte and Michael Pena. Everyone loves a great gangster flick through which to live vicariously, but we arguably haven’t had a great one since American Gangster. I think we’re due.

If the arrival of Anchorman: The Legend Continues is just too far away for your funny bone to take, you can tide yourself over with The Campaign. From director Jay Roach, who headed comedic franchises “Austin Powers” and Meet the Parents and recently acclaimed VOD hit Game Change, The Campaign Stars Will Ferrell and Zach Galifianakis as two rival political candidates running for congress in North Carolina. This foul-mouthed comedy is written by Chris Henchy, who is mainly known for his producing duties on shows Eastbound and Down and for Funny or Die, so you should pretty much have your snapshot by now. Like those shows and movies? No? Then you can stop reading.

In essence, The Campaign is Step Brothers with an Anchorman-esque lead character with two boy-men acting like buffoons in an escalating series of shenanigans that go out of control (unless punching a baby is a normal part of your day). Zach Galifianakis is unofficially bringing his soft-spoken, stand-up alter-ego “Seth Galifianakis” to the big screen and that coupled with supporting performances from Jason Sudeikis, John Lithgow and Dan Aykroyd should hint at a funny return to form for Ferrell, that is hopefully way more The Other Guys and way less Land of the Lost.

Hankering for another exorcism movie? I didn’t think so, and neither am I, but The Possession has more promise than most. First off, Sam Raimi serves as a producer and the cast is lead by Javier Barde…I mean Jeffrey Dean Morgan and though trailers (especially horror trailers) are often misleading in their actual potency, The Possession tosses up some decently creepy images. In this particular tale, a young girl (Madison Davenport) grabs a mysterious box at a yard sale which just so happens to contain a demon (stay away from flea markets, folks) that subsequently possesses her. It’s then up to dear old dad and co. to find a way to free her from the spirit’s clutches. Let’s hope this is one case where a term like “derivative” is trumped by one more akin to “pants-wetting.”

A writer at the peak of his literary success discovers the steep price he must pay for stealing another man's work. I just stole that synopsis from IMDB, but do I feel guilty? Ask me in an hour. In The Words Bradley Cooper stars as said thieving author, the fable that in addition contains a parallel story set during WWII that leads to the creation of the work that Cooper’s character will eventually claim to be his own. He is joined by some stellar supporting characters including Zoe Saldana, Jeremy Irons, Olivia Wilde, J.K. Simmons, Dennis Quaid, Ben Barnes and John Hannah. The film debuted at Sundance to mixed if not atrocious reviews. This is date night fare to be certain – essentially we’re looking at The Notebook for the Starbucks crowd.